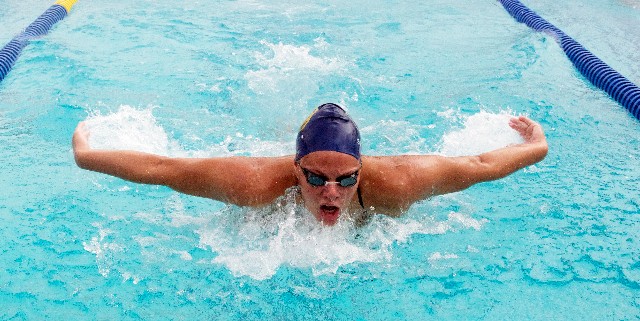 After helping the Aggies finish their season second in the conference championships, senior swimmer Samantha Shellem has certainly left her mark on the women’s swim and dive team. Owning her freestyle events all season long, this just means another exceptional year for Shellem.

“Just trust in your training and trust that you’ve done all of the work, and it’s going to pay off,” Shellem said in an early season interview. And pay off it did, as the freestyle swimmer finished her last regular season with impressive results.

After defeating University of Pacific in the last meet before championships, Shellem was honored with her second Mountain Pacific Sports Federation / Turbo Female Athlete of the Week of the season, and the fifth of her career. This followed three wins, one in the medley relay and two individual event triumphs.

“This is going to be my last year swimming ever, so I just want to finish strong and do well for my team,” Shellem said. Her words were prophetic as she bested personal and relay times left and right during the conference championships.

Shellem posted season-best records in all seven events she was entered into, including three individual races and four relays. As a part of a team, she collected a first-place win in the 400-meter medley relay with a final time of 3:40.87, a swim that she anchored.

Though these times did not guarantee her outright wins, she still medaled in many of her events. Shellem ended the meet with two second-place finishes, a third-place finish and came in fourth three times, two of which were relays.

Her performance helped the team to a total of 632 points for the championships, coming in behind only Hawai’i, who had 747.

Finishing the season with season-best times should in no way devalue her achievements earlier in the year. Shellem has been a consistent swimmer, day in and day out, and is one of the key reasons for the women’s swim and dive teams’ many achievements.

Shellem’s success both individually and in team events elevates her to more than just the status of an excellent athlete. She is a team player, one who has been an integral part of the UC Davis swimming and diving family for years now. As Shellem nears the final swims of her career, the swim team will undoubtedly have to adjust for the coming season without her unfailing performances in the pool.

Shellem will enter the pool competitively for the last time on Mar. 19, in the three-day NCAA Championships in Greensboro, N.C.