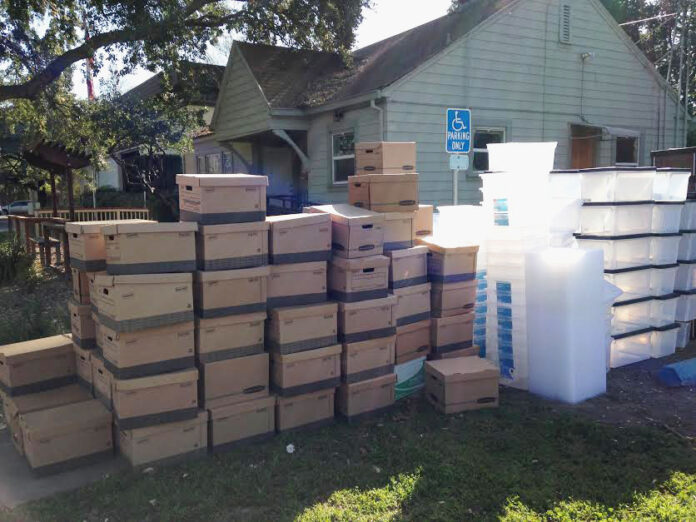 On March 7 the Short-Term Emergency Aid Committee (STEAC) and local Davis scouting groups paired up to collect canned foods and staples for STEAC’s food pantry on the curb of Fifth and D Street.

According to executive director Tom Martens, STEAC is a local non-profit that aims to provide short-term assistance in the form of rent, utilities and food, to families and individuals in Yolo County below the poverty line.

“[The] food drives…were primarily an all-volunteer operation. STEAC didn’t have a staff, they didn’t have money and so everything that they did was all donated. It started right away and has been going on ever since,” said Martens.

Martens went on to explain the different kinds of food drives, including the scout drive. When asked about how STEAC was founded in 1967, a particularly rainy year, in order to support Yolo County migrant workers. Born out of a volunteer’s kitchen table, it has since expanded.

“[Many migrant workers] didn’t have food because they couldn’t pay their rent, so many of them were without housing, they were living in their cars. [There] became a need in the number of residents, and Davis kind of saw that STEAC could provide emergency assistance for them. Then it grew from there,” Martens said.

According to Wong, the scout drive occurs once each year.

Dina Allison, the Davis Scouting for Food coordinator, explained the partnership between STEAC and the Scouting for Food program, a nationwide program. The scouts in Davis, however, have chosen to support STEAC as it aids the local community.

“One of the primary tenets of scouting is service and all scouts are required to put in service hours to advance in rank….We have been associated with [STEAC], as far as scouting working with [STEAC], since before I joined scouts seven years ago,” Allison said.

Will Benware, a board member of STEAC, whose wife is president of the board, explained his beginnings in STEAC.

“I started back around 1980 with the Holiday Program, and that’s been around since the late seventies sometime, and that’s how a lot of people get into it,” Benware said.

According to Martens, the STEAC food drives have a wide impact on the local community. On average they serve approximately 3,600 individuals per year and around 53,000 meals per year.

“For the most part, probably 90 percent of our food is donated…we do get grants to buy food…but it’s [spent on] stuff that doesn’t get donated like meat and cooking oils, those are things that we run short of. We also get fresh vegetables donated and we get the leftover vegetables from the Farmers’ Market downtown on Saturdays. That comes to us and gets redistributed,” Martens said.

Allison mother runs a food and clothing closet in Sausalito as well.