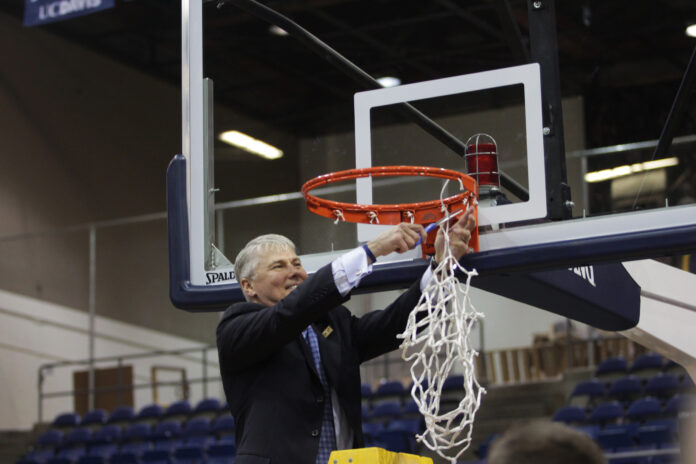 29 games into the season and the UC Davis men’s basketball team found themselves in the winner’s circle as they capture the Big West regular season title.  With an outstanding 24-5 overall record and a near perfect 14-2 conference record, basketball is the California Aggie’s Male Team of the Quarter.

A basketball temple of perfection, fans visiting the Pavilion never experienced a loss during this season as the Aggies notched a perfect 14-0 home record.  Protecting the Pavilion is easier said than done, yet the Aggies completed this feat with poise, confidence, and unrelenting determination.  Going on winning streak after winning streak, UC Davis never seemed to lose steam.  In addition, of the 24 regular season wins, 14 were won by a 10 or more points. Winning three overtime games as well, two of them being conference match-ups, the Aggies proved they have no problem playing with pressure.

Statistically this season, UC Davis was outstanding.  There are no obvious weak points in their game and the team has a knack for having guys step up when they are needed.  With season averages over 45 percent from beyond the 3 point line and 49 percent total, the Aggies do not take many bad shots on the court.  It is obvious that shooting from beyond the arc will be an important part of UC Davis’s game plan in the Conference tournament.

In his final year as an Aggie, senior guard Corey Hawkins led the team in almost every statistical category and was a clear leader on the court.  Hawkins set a standard for his fellow teammates with a 20.4 points per game average and 49 shooting averages.

Despite the array of emotions as Hawkins stepped off the Pavillion court for the last time as an Aggie, his determination for the future was clear to see.  “It’s a matter of staying true to ourselves,” said Hawkins regarding the Big West Conference Tournament.  Hawkins’ leadership will be very important in the post-season.

Fellow senior guards, Tyler Les and Avery Johnson as well as senior forward Josh Ritchard also finished their last seasons as Aggies strong.  Les and Ritchart’s confidence from beyond the arc has critical to spreading the floor to allow an outstanding slasher like Johnson to have successful games.

Les was emotional when asked about playing his last game in the Pavilion. “A lot of different emotions.  The biggest one I felt was happiness.  I couldn’t be happier to be leaving with this group of guys, this entire team, this coaching staff, these fans, at this University.  It’s a perfect ending.  I’m happy we got the win but now we’re excited for the next chapter and post-season play.”

Ritchart, a part of UC Davis’ dominant presence in the paint, felt a combination of relief and satisfaction with his ending at Davis.  “When we all decided to come here, this was what we all envisioned as what we wanted to do.  There were some tough stretches but we persevered and to be where we are now makes it that much sweeter.”  This season was a perfect send off for these players who have given so much to the UC Davis Basketball Program.

Despite the great season, the Aggies have one more hurdle to overcome.  They won their quarterfinal Big West tournament match-up against the sturdy CSUN Matadors and they will now play Hawai’i in the semifinals. Johnson expressed the team’s determination by confidently saying, “We’re ready to go on a run, and we’re not finished yet.  We’re ready to go to this tournament and shock the world.”

Undoubtedly, the Aggies are eager to prove to the world that they are truly the best in the Big West.