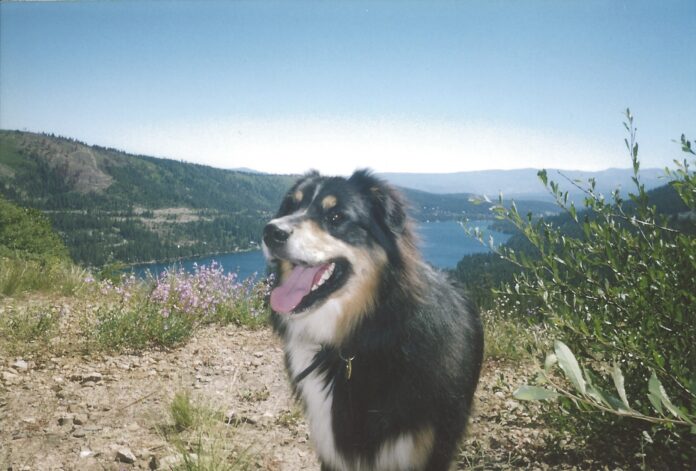 No. No. No. No. My eight-year-old self had been all too accustomed to hearing the word no, but I could not help but to continue whining, “Dad, can we please get a puppy? Pleaseeeeeee?”

My heart pounded as I proceeded to jump up and down. Every time I touched the floor my favorite new tennis shoes lit up blue at the rims. I gave my dad a look I thought he could never refuse, widening my eyes and smiling big, as if the word “yes” would keep me happy forever, or at least shut me up. But his only response remained, “No way, Melissa. Do you know how much responsibility a dog will be? And guess who will end up walking it, feeding it and taking care of it every day? Huh? I’ll tell you. ME!” I desperately tried to refute him, saying I was perfectly capable of the responsibility since I was older now and could handle it. Of course, my father saw right through my naive intentions. However, this was not the end of the argument. In fact, it was just the beginning of the story about my dog, Jake.

A couple months later my parents made a big mistake. It all started when they took me and my sisters to a charity event for Multiple Sclerosis (MS) disease in Half Moon Bay. The event was hosted at a ranch, where we paid for a meal, musical entertainment and a petting zoo. All the proceeds went to helping find a cure for and fighting MS disease.  The mistake was exposing their obsessive daughter to a pen full of available puppies without the intention of getting one. In my parent’s defense, they were unaware that the host’s Australian Shepherd had just birthed a litter of eight adorable babies. Immediately, I ran inside the pen and would not leave for the next four hours until it was dark and time to depart.

The puppy pen was big with multiple hay stacks inside, all surrounded by a metal fence at least four feet high. Kids and families swarmed around the puppies, most coming in for a brief moment, admiring their cuteness and then leaving without further interest. Not me, I was in love. I planted myself in the middle of them all, petting and playing with them, believing that I would go home with one in my arms.

I strategically talked to the owner who told me that six of the puppies had already been claimed and pointed me towards the two that were left: one male and one female. Both had similar coloring, all black except for hints of white and brown markings throughout their fur. I gravitated towards the little, clumsy male who had a big white spot behind his neck, contrasting with the blackness of the rest of his fur. He was one small ball of fluff, running frantically and biting softly at everything that touched him. When he got excited, he tried to run around in circles. During this motion, his hind legs were often faster than his front legs, so he ended up gradually turning sideways and tripping over himself. I played with him and held him for hours. When I picked him up his big brown eyes looked at me with innocence and immediate love while he stuck his tiny pink tongue out to lick the entirety of my face. I did not even notice the grossness of his slobbery kisses; I was in heaven.

“Time to go, Melissa.” Both of my parents waved me outside of the pen, refusing to step inside.

“Dad, just come in and take a look at him. I promise, then I’ll leave.”

After a 30 minute argument between the entire family, my dad signed some papers and paid the original owner. We were allowed to pick up the puppy, who we named Jake, the following week after he grew a bit bigger. My dad still teases me to this day, saying he will never forgive me for that trick I pulled. From that moment on, Jake was a part of the family and not to mention, just as my dad had warned me, a daily responsibility. Whenever he could escape the house he would sprint down the street, eager to chase down any cat or squirrel in sight. He often managed to break free from our backyard by digging a hole beneath our wooden fence. The main concern was he did not see cars as a threat. A couple of times I found him sitting or lying down in the middle of the street, stopping oncoming cars. Most dogs would run away from an approaching car, but my stupid dog would not move a muscle, even as the driver honked repeatedly at him. Jake would stare at the car blankly, as if to say “Actually, I’m pretty comfortable here so you should go around.”

Jake maintained this prince-like attitude for his entire life. My dad had a very strict rule that Jake could not sleep on the furniture; however, the couch became his bedroom. His other rule was against feeding Jake “people food,” until Jake was given steak and chicken leftovers on a weekly basis as a result of his insistent begging. Yes, my father could not resist spoiling Jake. Slowly, as previously predicted, my dad became the primary guardian of “my” dog. My father was the one who fed, walked and looked after Jake.

Though my dad said he did not want this responsibility, he loved taking care of Jake. The two of them became inseparable due to their routine morning strolls and nightly TV time together, where my dad would sit in his armchair and Jake would lie at his feet. The dog was the only family member who could pretend to like any boring news show my dad put on. They were best buds. Jake was all of our best buds.

Over the years both Jake and I both grew up. I went from a scraggly, awkward grade schooler to an adventurous college student while he went from an active young pup to a greying, slow dog. My first two years of college, I watched him get excited and jump onto me when I arrived home. At a certain point, he could only look up and wag his tail, struggling to stand and greet me as usual. Though I noticed the signs of his aging, I continued to believe he was invincible, that he would always be there beside me.

It was May and I was back at school in Davis. I was taking detailed notes during my Politics of Inequality lecture when my mom called, so I did not pick up. I got a text that said: Can you call me when you get a chance? I had various tasks to complete after class so I did not call right away. Then she called again. I picked up the phone this time and my mom was in tears. She told me that Jake had a stroke and that she found him in the bushes, his face buried beneath the leaves. “I have no idea how long he has been out there all alone. Your father and I are taking him to the vet. He seems to be okay now, though….No honey, don’t come home yet. Just wait to see what the vet has to say.” I had some hope.

An hour later my phone rang again; I picked up immediately. “Sweetie, he’s not going to make it.” My heart stopped, my body shook convulsively and tears streamed down my face. “Mom, I’m coming home. I’ll find a ride, let me just ask my friends to borrow their car.”

She responded with the painful words: “Melissa, I’m so sorry, there is no time. The strokes are happening more frequently and they are getting worse. The vet said waiting for you to put him down would be cruel in his condition.”

“What? No. I can get there I’m just going to ask my friends for a ride, okay?” My voice was shaking. I barely realized I had been screaming into the phone. My mom kept repeating that there was no time while I desperately looked for a ride. I hung up on my mom and called everyone I knew explaining the situation; that I needed a car right now. A couple people said their cars were broken and some said they could give me a ride. I was gathering my stuff when I got a yet another call.

This time it was my dad. He was crying and said, “Melissa, listen to me, I know you want to say goodbye in person but it is not possible. Jake needs you right now to say goodbye. If it can’t be in person then you must do it over the phone.”

My heart sank and I cried harder. I dropped the random items I was carrying to pack for home, sat down on my floor and put my head in my hands. I sobbed over the phone until I could catch my breath.

“I’m putting the phone up to him now,” my dad said.

My lips trembled as I imagined my childhood friend strapped to a cold, white table. I pictured Jake lying there, incoherent and in pain, desperately waiting for it all to go away. There was nothing that could be done.

“Hi Jake. It’s me, Melissa. Aw buddy you have terrible timing,” I laughed in between sobs. “Remember all the times I tried to get you to play fetch and you would just catch the ball, run away and bury it somewhere where I could never find it? I would eventually give up and just chase you around the backyard until we got tired and lied in the grass together. After a fleeting, relaxing moment, you would gain more energy and jump on top of me until I went to find the ball for you again. I just want one more of those moments with you.”

I paused, knowing whatever I said next would be the last words he heard from me, if he could even hear me. I like to think he did. Finally I managed to say: “Don’t be afraid now because everything is going to be okay and I will see you again someday. I love you.” My family all said their goodbyes into the phone for me. All of it was a blur. The next few days I woke up with a pain in my chest, feeling the loss of him. When I eventually arrived home, I went out into the backyard. My dad was outside and I looked over at him; all I could manage was a shoulder shrug. We both had tears in our eyes, so he came over and hugged me. “It’ll get better,” he said.

No one thinks losing a pet will be as difficult as turns out to be in reality. However, it did get better with time. Many days pass where I do not think of him at all; other days little things randomly remind me of him. When I think back on our times together, I rarely feel sadness, but instead cherish all the memories we had together growing up. The memories alone keep his spirit and our childhoods alive.

To this day my dad still says: “Melissa, if only you hadn’t tricked me into getting that damn dog. Then we never would have loved him as much as we did.” We both know we would never trade the experience of owning, loving and losing Jake for a life without him.

Melissa Gaherty is a Centennial Magazine contributor. You can reach her at magazine@theaggie.org.