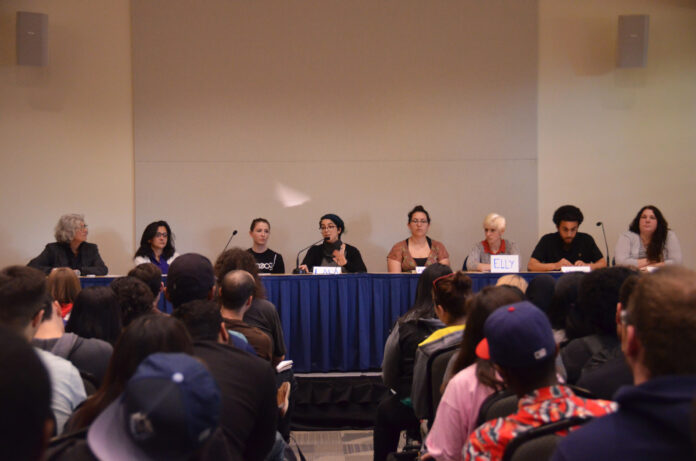 On March 4, the Jewish Studies Program, the Middle East/South Asia Studies Program and the Cross Cultural Center sponsored a panel entitled “Anti-semitism and Islamophobia: The Anatomy of Twin Hatreds.”

The panel, initiated as a means to begin a conversation about eliminating hate speech, was moderated by history professor Susan Miller and Noha Radwan, an associate professor of comparative literature, and a group of six of Miller’s history students sat in front of an over-capacity room in the Student Community Center’s multipurpose room, facilitating dialogue between the speakers and the audience.
“The greater underlying problem is a fear of differences,” said attendee Ambrosia Solis, a fourth-year political science and public service double major. “If you do not seek to understand, you seek to judge.”

Solis referenced the recent murders in Chapel Hill, North Carolina, the defacing of the Israeli flag in Sacramento and anti-semitic acts on the Davis campus as the reasons she felt the need to speak up. She said that she wants people who are not part of either the Jewish or Muslim communities to acknowledge the hate speech that occurs regularly and often goes unnoticed.

“I want people to start the hard dialogues and understand where people are coming from,” Solis said. “This is more than just a minor or isolated incidence.”

Emily Nicol, a fourth-year English major, feels that when anti-semitic or islamophobic incidents occur, the media often propagates the hateful ideologies. She referenced a fake document, “The Protocols of the Elders of Zion,” published in 1903, that exposed a supposed Jewish conspiracy for world domination. According to Nicol, publications such as this led and still lead to the intensification of hate, and she said that peer-to-peer media in today’s culture has only made misinformation easier to proliferate.

Nicol feels that, since the September 11, 2001 attacks on the World Trade Center, there has been an increased trend of the media generalizing all Muslims as Arabs and all Arabs as Muslims, which constitutes hate speech.

“When you have mainstream media that broadly refers to Muslims, then it promotes a culture of fear,” Nicol said.

Mahmoud Hassane, who is Muslim, told the story of his inclusion of a new Christian student when he was growing up in Egypt. There, he said, Christians were the minority and other students were making the student feel unwelcome with verbal abuse and intentional exclusion.

“There were people who did nothing to help who were just as complacent as the person doing the crime,” said Hassane, a first-year managerial economics major.

Elly Oltersdorf, a Jewish student and second-year history major, said that she desires to educate people to be not just tolerant, but also compassionate. She stressed the importance of avoiding assumptions and instead seeking out an education via interactions with other people.

“Instead of trying to understand someone else’s narrative, try to equate their narrative to yours,” Oltersdorf said. “No one experiences anti-semitism or islamophobia in the same way.”

Oltersdorf also felt that the perceived tension between the Jewish and Muslim communities was in fact an example of blurring the lines of identity. Oltersdorf said that she left the panel wishing that those who presented and spoke would have focused more on the marginalization of the two groups in today’s American society.