Slow Magic and GLSS at the Quad Review 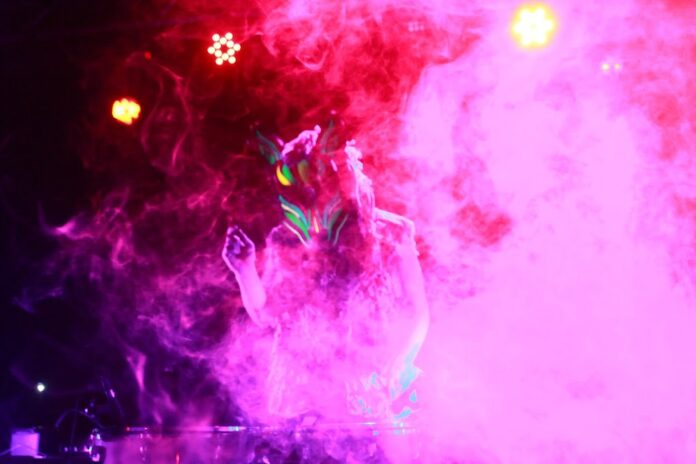 Throughout the week, the question “Are you going to Slow Magic on Saturday?” was widely heard around campus. On Saturday, the UC Davis Quad became an electrifying festival ground for Slow Magic, opened by GLSS. By 7 p.m., the grassy lawn was strewn with picnic blankets occupied by students decked in crop-tops, flower bands and a need to celebrate the beginning of Spring Quarter. The soothing techno beats of GLSS, a duo of Philip Scott and Brandon Whitney from San Francisco, filled the air and set the mood of the night: energetic and ethereal.

When 8 o’clock rolled around, a hooded figure in a colorful animal mask leapt to the stage, pulling in the crowd around him. Slow Magic’s otherworldly set began mellow, easing the audience into a dream-like state. The students, unsure of how to dance to the music at first, swayed and cheered as our masked performer shot a heart out to his audience. With boundless energy, Slow Magic danced in a fashion similar to Where the Wild Things Are, stomping and heaving his great, glowing mask across the stage. As his self-described genre is “no,” Slow Magic does not fit into any one genre, and instead, is unrestricted and draws inspiration from many different genres.

Bright, sometimes blinding lights flooded the stage as fog rolled in and Slow Magic churned music out. As the night went on, the music picked up tempo as well, and the audience pushed and shoved their way to the front to get a glimpse of Slow Magic’s unyielding energy. As an anonymous musician, Slow Magic claims to be everyone’s imaginary friend, which he proved through this performance. Each song came from the depths of our imaginations, bringing together childhood and adulthood through music that touches on both dreamlike and electronic elements.

Slow Magic did not play a set list, and instead improvised and played many songs from his newest album “How to Run Away”. Toward the end of the show, he performed an improvisation of “Corvette Cassette” from his 2012 album “Triangle”. At this cosmic and upbeat piece, the audience burst with enthusiasm and rippled with swaying, dancing and shoulder-sitting.

At 9:15 p.m., Slow Magic disappeared just as quickly and mysteriously as when he had first arrived. But all isn’t lost, as our imaginary friends never really leave us.