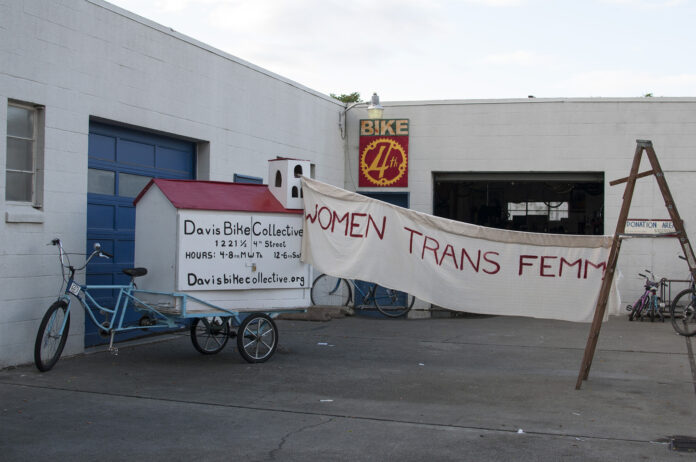 Bike Forth, a community bike shop on the corner of Fourth and L streets run by volunteers for the Davis Bike Collective, is open to the general public for a few hours every Monday, Wednesday, Thursday and Saturday. But, starting in February, the shop began opening its doors every other Tuesday, specifically for people who identify as part of the Women Trans Femme (WTF) community.

Anyone who needs to use the tools and space for bike maintenance is welcome to do so in the Bike Forth garage. However, volunteers have noticed that most customers are men, a trend that is common among other bike shops as well.

“I love this shop. It’s empowering for everyone who comes in,” said Jenny Van Wyk, a volunteer at Bike Forth. “Everyone should always feel welcome to come here. I’m not saying that you shouldn’t go to bike shops and have them fix it, but you can fix it yourself, you can learn how and we have all the tools to do that.”

WTF night is Bike Forth’s response to the common view that bike maintenance is predominantly for men.

“The idea is for people who might feel uncomfortable coming to the shop in general to have a safe space to come and learn about bikes,” said Anne Hereford, a volunteer at Bike Forth who helped initiate the latest incarnation of WTF night in Davis. “At the shop it’s a very supportive community, but some people still feel intimidated about coming to work on their bikes, specifically women and people who identify as women. We want to empower them to work on their bikes, and if that means having a special night where they can come and not feel intimidated then that’s what we want to offer.”

Van Wyk, who is also responsible for the return of WTF night, said it started in Davis in 2008 and has made a few comebacks in the years since. After starting as a volunteer for the Bike Collective, she decided to begin a new iteration to help these marginalized groups get a handle on bike maintenance.

“If you don’t know how to work on your bike it can often be intimidating, or you have the experience where you come in and someone says, ‘Let me do it for you,’” Van Wyk said. “This happens in mechanical realms. This happens across the spectrum in traditionally male-dominated activities.”

Part of addressing this intimidation includes limiting access to the shop on those Tuesdays to only people who identify with the WTF community.

“We don’t exactly turn people away — we say, ‘Do you identify as part of this community?’” Hereford said. “If you don’t feel you’re a member of the Women Trans Femme community, this is not a space that you’re invited to. So it’s more of a self-selection.”

People who identify as men are encouraged to go to the shop’s regular open hours on the other days of the week.

“There are still women and transgender people in our society who feel intimidated when they’re in a male-dominated space,” Hereford said. “Frankly, the shop is often male-dominated. If you go in on an afternoon that is not WTF you’re likely to see more men than women.”

On top of regular shop hours, volunteers planned a series of workshops designed for teaching the fundamentals of bike maintenance.

“The beginning of every session, from 4 to 4:30 or 5 [p.m.], we run a specific workshop about fixing a specific part of your bicycle,” Hereford said. “We set out to break the bike down into component parts to look at. The most basic thing that anybody needs to know is how to change a flat. That happens to everybody if you ride around long enough, and that’s something that’s pretty simple to grasp. And then we are progressing to more difficult parts of bike maintenance. We’re ending with a night on overall bike tune-up and bike maintenance, an overview, how often you need to look at different parts of your bike and how to keep it clean and running smoothly.”

Bike Forth has held five workshops on WTF night and plans to do at least two more on April 21 and May 5. The volunteers hope to continue at least the open hours portion of WTF night but whether they will do another series of workshops depends on the turnout.

As part of the workshops, participants see how the work is done on an example bike before they move on to practicing on their own bikes.

“We’ve been building up a bike all together as the example bike every week, and that bike is going to be donated to a homeless woman when we’re through,” Van Wyk said. “You’d be shocked by how much having a working bicycle can empower someone in the homeless community, so that’s part of our mission right now.”

Van Wyk mentioned that four participants are in the process of building their own bikes from scratch. One of them is Caroline Larsen, a graduate student in ecology at UC Davis who has attended each of the workshops.
“The most surprising thing is just how easy things are once you know how to do it properly,” Larsen said. “I’m really surprised how feasible it is to actually build your bike up from scratch once you break it into little parts.”

Larsen commented that she knew very little about bike maintenance before going to the workshops, but she feels confident in being able to use the facilities at Bike Forth.

“[Biking] is the main mode of transportation here,” Larsen said. “That’s the easiest way to get around. You don’t have to deal with parking your car, you can ride it anywhere. Being able to bike around — it’s nicer, it’s calming, it’s a way to get exercise. And obviously it’s a more environmentally friendly choice, and if you don’t have to drive then why would you? Especially when you’re in a place where biking is encouraged.”