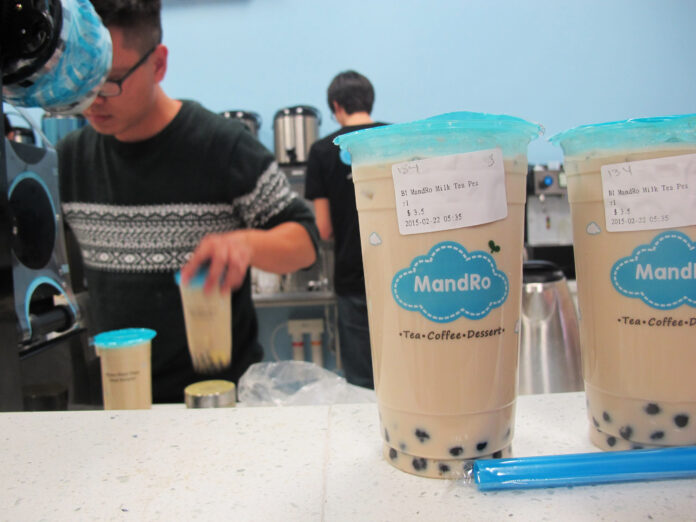 Writer and friends traverse to find the best boba of Davis

As trends come and go, one particular popular trend in Davis appears to be boba, and there definitely is not a shortage of local options to choose from. I went with a group of friends to various boba joints across town and compiled the following list. At each location, we requested a small serving of straight boba, also known as tapioca pearls. I travelled and sat down with a few friends who will represent the general public in these boba testimonials.

Using a scale between one and five, one being the lowest and five being the highest, we rated the boba in five different categories: smell, look, taste, chewiness, and texture/consistency. I also asked those who worked at the places we went to for ratings as well as information about their boba.

It feels like a different texture than other boba, probably due to the honey and brown sugar coating. There isn’t a whole lot of sugary flavor, but it definitely has a nice taste to it.

Some of the general public who tried Quickly’s boba said it was soft, slimy and tasted odd yet still had a nice sweet smell. Others didn’t perceive any particular taste at all.

No. 7 The Old Teahouse

Several employees expressed that they did not like the boba they served. When asked about their boba, Old Teahouse employee Howard Tseng provided insight on how it’s made.

“We boil and cook it for about an hour,” Tseng said. “It’s not very hard to make. It takes times and you get used to it. You can’t stir the boba too fast — you have to be gentle, or it can break. It’s white because of the brand of boba.”

To me, the boba is very chewy and looks very appealing. The white boba looks very different in contrast with other boba I encountered in Davis.

Most of the negative comments were about the smell of the boba, similar to the smell of honey-flavored cough syrup. Some Old Teahouse goers liked that the boba was white (since most boba is black or brown), but said it has an unsavory smell that is similar to that of cough drops or menthol.

The stated boba is made fresh every morning when the Coffee House (CoHo) opens. The boba is really sweet and is brown, which is different than most of the boba we tried.

“The boba is sweet, but not too sweet,” said fifth-year clinical nutrition major and CoHo employee Madeline Pitman. “I like the sugar smell it has. The boba balls are really hard to make because [they are] very sensitive. It takes about an hour [to make], and requires a lot of manpower.”

However, some of the general public disagreed and believed the boba to be too sweet.

I thought the boba was really hard and slightly difficult to chew. It smells like brown sugar, but you don’t taste any in the boba.

The boba looked smaller than all the other boba in Davis. Most comments gathered from employees and the public stated while it’s not the best boba, it’s not the worst.

“The boba is made fresh everyday,” said Bambu employee Danh Do. “It comes pre-made and we just need to cook it. Not the best boba, but it’s not bad.”

While it doesn’t have the best flavor, it is a very consistent flavor. Most of the other boba we have tried had flavor for a few seconds and then turned bland, while this had the same flavor throughout.

While some boba-eaters enjoyed the taste more than other boba places, a few thought the boba was too soft and had a lesser, but a more constant syrupy flavor.

The boba didn’t have a smell or a taste to it, which I thought was strange, until one of my group members pointed out to me that the boba takes the flavor of its drink. I purchased a drink myself and tried several to find that the boba does take on the flavor of the drink. In fact, I think this type of boba makes the entire drink taste better.

The general public said that the boba looks clean, well shaped and well formed, with no specific flavor.

According to manager Steven Huang, the boba is made every four hours.

“We strive for [consistency] and simplicity,” Huang said. “There is not much of a smell and it takes the part of the drink. A good product speaks for itself.”

Personally, I liked how the boba felt in my mouth — very soft, but not too soft.

Although the boba looked appetizing to consumers, it was said to be not especially chewy.

Employee Brandon Dinh gave an insight to how the boba has evolved over time.

“I think it’s very ideal boba,” Dinh said. “When we first made the honey boba, it took a lot of trial and errors. It finally has reached it’s perfect taste and texture. It’s sweeter and tastier than plain boba, and it has a nice honey flavor.”

The honey smell that the boba has adds to it’s appeal. This place is for those that like sweet boba.

The boba at Teabo is liked very much by the general population of Davis, consumers testifying that it is sweet and simple with a good taste and an ideal texture.

I felt that the boba was definitely chewy, but not extremely chewy. It has a good brown sugar flavor to it, with a sweet savory smell. It doesn’t taste like there is so much sugar added to it; it has the right amount of sugar added.  After it’s been in my mouth for a while, though it has a weird texture.

Manager An Nguyen said that all the boba comes from Taiwan and is gluten-free.

“I didn’t drink much [boba] before working here,” Ngyuen said. “I drink boba from other places, and ours is pretty up there.”

MandRo boba tasters said that the boba is the perfect amount of sweetness, with a silky smooth texture and an appetizing appearance.

According to employee Roey Zhu, MandRo has a house-made sugar that they soak the boba in everyday.

The boba has a caramel smell to it, almost as if a lot of brown sugar was added to the syrup to make it. I would recommend this boba for those who like sugary boba.

NOTE: The cups say “Please finish within two hours,” which was pointed out to me, as other boba places did not have this on their cups. The reasoning is so that every drink is fresh; otherwise, over a long period of time, it will lose its flavor.