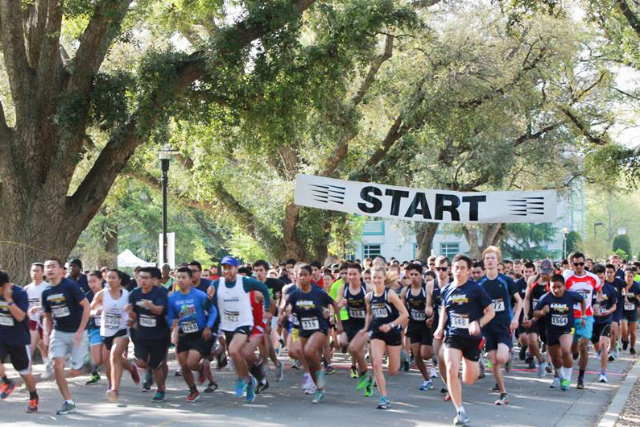 The annual Stride for Aggie Pride 5K is only in its third year, but has already reached new heights.

Over 3,000 runners are registered to participate in this year’s race, which will take place on campus on Sun., April 26. Last year, the event raised $25,000 for students in need, where half the money went toward ASUCD scholarships, and the other to We Are Aggie Pride, a student-led philanthropy program.

This year, these amounts are only expected to increase. With such large numbers, the event required extensive planning efforts from its three student co-chairs, each representing the three different units that work to make the race possible.

“Planning starts in the fall,” said third-year political science and history double major Gareth Smyth, who is representing ASUCD. “We get the group of co-chairs together and we ask ourselves what our model is. The majority of the planning happens in the winter so that come spring, we have minor things to worry about.”

Still, according to fourth-year history major Ishmael Pluton, representing Campus Recreation and Unions, setbacks can still occur. A couple of student performance groups that were scheduled to perform at the event recently backed out, leaving Pluton to find replacements.

Additionally, the co-chairs realized midway through planning that the number of volunteers originally signed up for the event would not be sufficient. In a rushed effort, Pluton reached out to a number of athletic clubs on campus, including the volleyball, water polo and lacrosse clubs. Smythe and third-year communication major Ellen Davis, representing We Are Aggie Pride, contacted a number of volunteer organizations on-campus and in local high schools.

“As the primary volunteer coordinator, my biggest concern is not having enough volunteers,” Davis said. “We have over 100 people who have signed up to help, nearly 150, but it takes a lot to run an event of this size.”

Volunteers may be performing a range of tasks, including helping with packet distribution and racer registration, running information booths and crowd control.
This year, the 5K is intended to be more than just a race, but an event with a “festival” atmosphere that even people from the larger Davis community can enjoy. Food trucks will be present, and visitors may compete for raffle prizes.

The City of Davis Mayor Dan Wolk, as well as Provost Ralph Hexter will also be speaking at the event to further emphasize the collaboration between the campus and community.

This year’s event itself also comes with changes from previous years, namely a medal system to recognize the top three runners in every age group. Smythe hopes that this will incentivize more people to participate in the 5K in future years.

“Even though it’s a fun run, we want to encourage people to give it their all,” Smythe said. “Hopefully the medal ceremony does that.”

While there were some issues last year, including a problem with the audio system used to communicate with the racers, Pluton is confident that this year’s race will run more smoothly.

“I think we’re pretty set,” Pluton said. “We have a great team. This is a great situation because I’m working with people who have done this before. I hope that we have a huge turnout and that people get the message of health and wellness we are trying to promote. Overall, I have a lot of faith. I think everything will work out well.”