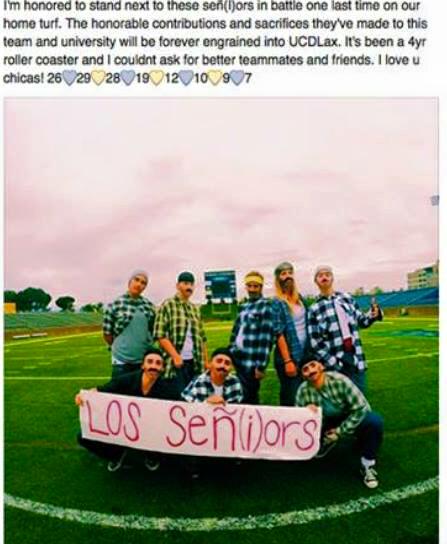 A member of the UC Davis women’s lacrosse team posted a photograph on her personal Facebook page that sparked negative backlash from across the UC Davis community. In this case, the image targeted the Chicana/o and Latina/o community, according to an email sent to the UC Davis student body by Adela de la Torre, Vice Chancellor for Student Affairs. The email expressed disapproval, and called “on all members of our community to commit to a climate of cultural humility.”

The email also said that Student Affairs will work with UC Davis Athletics in an effort to “explore strategies for enhancing educational opportunities that promote awareness, sensitivity, respect and appreciation for the diversity represented at UC Davis” by opening more chances for talks about issues such as this.

Interim Athletic Director Teresa Gould has met with students from the campus community as well, and an event has been organized in response via Facebook, titled Community Dialogue: Our Culture is NOT a Joke. It will be held from 4:30 PM to 6:00 PM in the Student Recruitment and Retention Center on Friday, April 24. Athletics has not commented further on the occurrence at this time.

The event titled Community Dialogue: Our Culture is NOT a Joke met on Friday, April 24.

This Community Dialogue meeting provided an outlet for many students, lending a safe environment where many could express themselves in light of the recent events. The specifics of the meeting are confidential, in order to protect the privacy of those who were in attendance. General consensus, however, was that substantial action should be taken to prevent more of these abrasive incidents.

Within the past year, there have been several other events deemed offensive by members of the community including the Cinco de Drinko Sloshball game put together by UC Davis Coffee House employees. With the photo posted of UC Davis lacrosse seniors fresh on their minds, many felt that more significant institutional policy needs to be implemented by the University to stop this from happening again.

Community members are currently weighing options as to best convey their position, as well as what they expect the administration to do about these occurrences. They hope to respond to the recurring history of similar happenings on the UC Davis campus in an attempt to bring wider understanding of the magnitude of this type of insensitivity to the administration and the community that it serves.

A letter addressed to Chancellor Katehi and Senior Administration of UC Davis has been drafted as a result of the event that took place on Friday. The letter notes that UC Davis Administration has “systematically failed to respond to and prevent incidents of racial insensitivity, hate, harassment, discrimination, and ignorance,” while listing a number of events that have taken place around UC Davis campus over the last forty years.

The letter calls for a response from administration beyond an apology, insisting on “immediate and clear consequences for any future acts of similar nature, and that those consequences be mentioned as clearly as possible to any future students who wish to partake in any similar event.” To read the letter in its entirety, click here.

A number of community members and campus organizations have signed the letter including ASUCD President Mariah Watson, several ASUCD Senators, Cross Cultural Center staff and many more.  A hard copy letter will be served to Administration at Mrak Hall at 2:30 pm on Monday, according to the Community Dialogue: Our Culture is NOT a Joke Facebook event page. The letter requests a substantial response within 24 hours.

Thus far, there has been no official response to the lacrosse photo from UC Davis Administration or Athletics. As early as Friday morning, Athletics Administration acknowledged that they were aware of the situation and that a response would be forthcoming.

A hard copy of the letter was not delivered to Mrak Hall this afternoon, as the event page originally stated, according to Sabrina Sanchez, the Holistic Retention Coordinator for the Yik’al Kuyum The Chicanx Latinx Holistic Support Program at the Student Recruitment and Retention Center (SRRC), a signatory of the letter. Sanchez adds that the letter was submitted in an email to Chancellor Linda P.B. Katehi and other members of the administration instead.

Featured photo taken from Facebook event “Community Dialogue: Our Culture is NOT a Joke.” The Aggie will continue to update the story as more information becomes readily available.