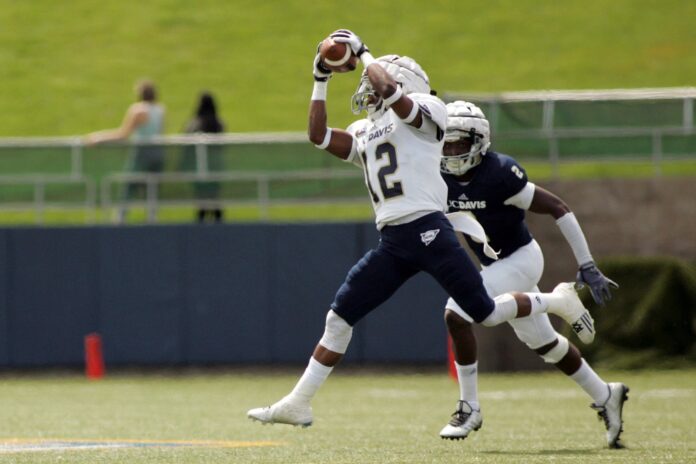 It was a warm, fun-filled day at Aggie Stadium as the UC Davis Football team went through scrimmage exercises to get some in-game practice and excite fans for the upcoming season.  The Aggie offense faced the defense in a relaxed setting that consisted of four 15-minute quarters.  Extra helmet padding was in use as the safety of the players was greatly emphasized.

Although the fans were there, it appeared that the offensive passing game was not, as communication mistakes coupled with a plethora of penalties led to a disheartening one-touchdown day.

“The guys had a lot of energy but we had way too many penalties,” stated head coach Ron Gould. “This is very uncharacteristic of our team and what we are trying to build here. But I like the fact that the guys are very resilient.  You see their energy and you see their effort out here. There were four things at the start of spring that we talked about. We talked about their consistency, communication, their willingness to compete and their focus. I’m grateful and very proud that every year these young men have gotten better at embracing what we’re trying to get done here.”

Clearly, Gould has high hopes for this team.

The Aggie running game was successful at taking over despite the passing troubles which definitely gave hope for the offense as a whole.

“They did some good things,” Gould said, as he discussed his running backs.  “But we still have a lot more to improve.  We’re not even close to hitting on all cylinders.  It was good to see those guys be physical and run behind their pads.  Coach Chapin has done a great job with improving those guys.”

Despite the promising output by the running backs, much more will be needed for success during the upcoming season.

Perhaps the most important factor of the day was the emotional characteristics of the team.  Leadership is definitely a crucial factor for a winning season, and it was obvious that true leaders were beginning to emerge.

“We talk a lot about leadership,” Gould said. “That is definitely something that has transpired from the team.  These guys are holding each other accountable for their actions.  That’s how you know your guys are starting to buy in to the idea of leadership.”

Given that the season is still a summer away, no player’s place on the team is secure.  Every player is fighting for a starting spot and Gould wants each of them to know that they have to earn their position.

“I want everyone on the team to feel like there is an opportunity to compete.  You have to earn the right to say that you are a starter. Nothing is given, everything is earned.  We have to make sure every guy knows that when it’s work time when they step on the field.”

Gould expects the best from his players and he is not shy about making that known.

At the end of the day, sophomore quarterback Ben Scott had much praise and a lot of hope for scrimmage and the rest of the offseason.

“I think we ended the day very well,” said Scott.  We’ve been having some pretty good practices so far and today we finally got to showcase what we can do.  We have a lot of young guys getting a lot of experience.  Great building blocks for going into the summer workouts.  There is still a lot of room for improvement to get to where we want to go.”

Last year’s two- win season is clearly behind this team as they have a lot of confidence and hope for the upcoming race for the Big Sky Championships.  Only time will tell if their hard work and optimism pays off.