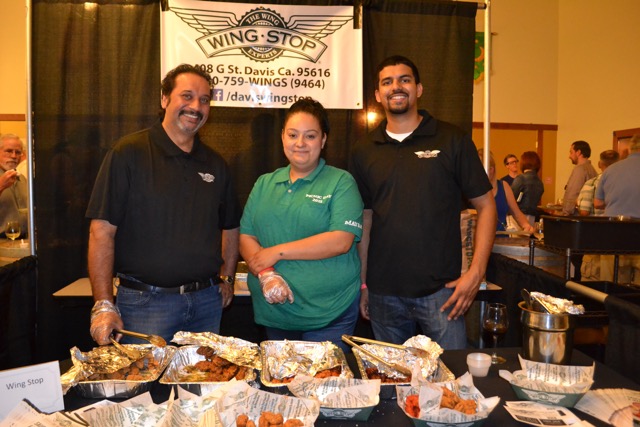 On Thursday, the Davis Odd Fellows Lodge Hall, located at 415 Second St., was abuzz as guests lined up outside for the sixth annual Taste of Davis event sponsored by Davis Odd Fellows. The event lasted from 6 to 8 p.m. and included food samples from local breweries, wineries, coffee shops and restaurants. With two floors filled with booths serving food, the guests took their time as they meandered from booth to booth eating, drinking and talking with friends.

Mike Sullivan, a former Davis resident who now lives in Woodland, was attending the event for the first time. Enjoying his evening and the energy filling the rooms, Sullivan expressed his appreciation for the restaurants that took part in the event. Some of his favorite dishes included the hot boneless chicken wings from Davis Wingstop, as well as the beer from Sudwerk Brewing Company. Although he had been to some of the restaurants before, Sullivan found many new places to try as well.

“I didn’t know about Jackrabbit Brewery in West Sacramento….I’m finding all sorts of stuff. I plan on finding out more downstairs,” Sullivan said.

Kirsten Bockdum, a Davis resident who was invited by her friends, also enjoyed tasting food from new places. One of her favorite dishes was the Farmer’s Salad from Paesanos.

“It’s really nice to taste different restaurants that we see in passing but don’t always go to. It’s also nice to then try some new items from restaurants we have gone to but just haven’t tried that particular item,” Bockdum said.

As the evening went on, platters were cleaned of food and promptly replenished as guests made their way around the room. One guest took it upon himself to play the piano positioned in a corner of the room. The live music added to the festivities as guests enjoyed their food and found places to sit.

City Council members, including Councilmember Brett Lee, were also present at the event.

Lindsey Cunningham, a fourth-year biological sciences major, attended the event as a representative from Berryessa Gap Winery, where she is employed. She explained that the evening had been very busy as people visited her booth to learn about the company’s wine.

“All of our wine [grapes are] grown in Winters, so we’re local,” Cunningham said. “I think part of being here tonight is to show that we support our local community and that we want to share our wine with Davis.”