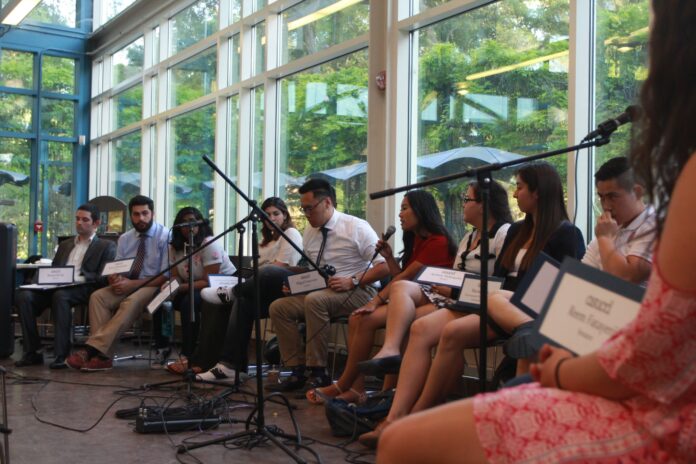 On April 30, the association hosted a town hall event entitled “Pizza and Politics” in an attempt to inform undergraduates about student government activities.

Eight senators, four commission leaders and the controller lined the west wall of the ASUCD Coffee House beside stacks of pizza boxes to answer questions.

The public dialogue was set to be moderated by the leaders of nonpartisan ASUCD units and commissions.

The Entertainment Council provided a sound system to ensure that everyone could hear the officials’ remarks. Aggie Studios, formerly known as AggieTV, broadcasted the event on its website.

Fewer than 50 people attended. As of Sunday, Aggie Studio’s Youtube post of “Pizza and Politics” had 100 views.

For the many students who did not attend, here’s what happened:

Several senators discussed how they were making progress on their platforms.

Senator Anas Tresh said that Tipsy Taxi is considering a partnership with the UC Davis Police Department’s Safe Rides program to respond to the growth of services like Uber and Lyft.

Senator Sevan Nahabedian said he is working with the Bike Barn to develop a cheaper, long-term bike rental program.

Senator Danielle Santiago promoted her own effort of government transparency with her new senate blog.

When asked a question regarding the budget cuts that paid membership to the University of California Student Association (UCSA) would incur, the following answers were given:

Senator Nahabedian said that, while he understands UCSA’s importance, he would not take away from student services to pay for membership.

Senator Roman Rivilis said that ASUCD, after trying to negotiate for lower membership fees, should cut units underutilized by undergraduates.

Controller Francisco Lara said the executives would not simply cut units without conducting a cost-benefit analysis.