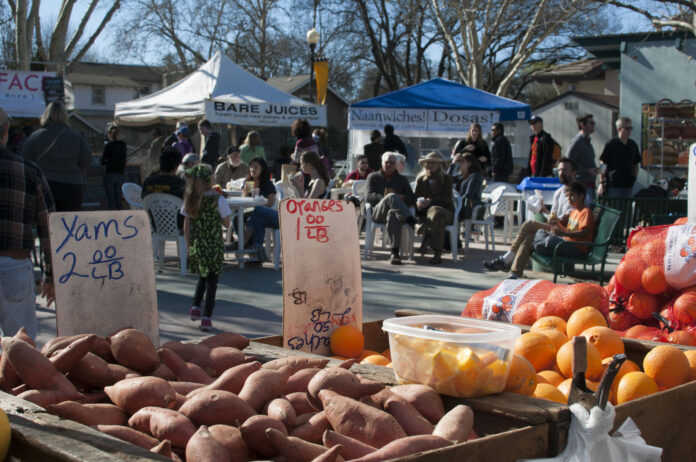 Trudy Kalisky was a graduate student at UC Davis when she and her husband Mo decided to start their own business. Over the years it developed into what is now the Upper Crust Baking Company, an artisanal bakery known for its unique bread and cookie recipes. They’ve been selling at the Davis Farmers Market for 28 years.

Kalisky believes the Farmers Market is an educational opportunity for students.

“I think it’s part of the whole learning experience because you get to see and talk to people who produce the product,” Kalisky said. “It’s not a grocery store, where the grocery manager doesn’t know what he put into it.”

Kalisky buys wheat from a mill in Woodland that gets its wheat from the Sacramento Valley, but she says that when buying from bigger mills it’s difficult to know when or where it’s from.

“Most mills have a scientist on staff. In a big mill they don’t always have the same wheat, so [that scientist] has to make his or her brand name all the same all the time, and he’s mixing winter wheat from Montana with summer wheat from God-knows-where. What’s special about [the wheat in Upper Crust’s bread] is that it’s all locally grown, and it’s absolutely the best wheat I’ve ever used,” Kalisky said.

On Saturdays, Upper Crust has booths at eight different farmers markets between San Francisco and Rocklin, but Kalisky is always at the Davis table.

“This is my home base,” Kalisky said. “Everybody in town knows me, and [the Farmers Market] is important to me. I think a lot of people trust me because I’m here all the time and I know what I’m talking about.”

Ron Toppi farms for Massa Organics, which has been selling at the Davis Farmers Market on and off for the past four years. Massa Organics is a small family-owned farm located near Chico along the Sacramento River. Greg Massa and Rachel Krach started the company in order to find ecologically sustainable ways to grow rice. Since 2004 they’ve expanded their produce to include almonds and wheat, and begun raising livestock such as sheep and pigs.

“We don’t do any of the spraying that conventional growers do,” Toppi said. “Sometimes in the early spring just before the [almond] bloom we’ll use organic sulfur for a fungus, but this year we didn’t have to. Our orchard is dual-purpose so we raise sheep in there. We don’t really have to do a lot of mowing or fertilizing because the sheep do all that work for us.”

“When we do water, the moisture retention is much better than [it is for conventional growers]. That cuts down on the amount of water you’re going to need because the ground doesn’t dry out as quick,” Toppi said.

In their rice and wheat fields, they rotate in safflower, a flowering plant which has  seeds that produce a vegetable oil. Massa converts the oil into biodiesel, which they then use to power their equipment. This crop rotation process also prevents weeds from settling in.

Recently, a statistic highlighting almond production as a major water user has been gaining attention. According to a 2011 study conducted by the United Nations Educational, Scientific, and Cultural Organization Institute for Water Education, it takes approximately one gallon of water to produce a single almond. Toppi believes that the representation has been given a disproportionate amount of attention when considering farming methods.

Toppi said he believes the statistic is helpful in understanding water use.

“I think it’s a good number to put out there because when you look at the bigger picture and you look at the big industrial agricultural system that’s out there, [growers in that system] do use a lot of water,” Toppi said. “Way more than is necessary to grow good, healthy food for people.”

Lloyd Johnson has been selling his produce at the Davis market for 19 years. He’s known for his overwintered onions, but his cash crop is tomatoes, which he grows on his farm just 18 miles away in Winters.

“[My wife and I] live in Davis, I lease the farm, and I’ve been on the same property for 19 years,” Johnson said. “It’s five acres. It’s just gardening paradise here. There’s 10 feet of topsoil, without a rock, and we have a well. With this climate you can grow anything. It’s really amazing.”

But Johnson is still weary of the drought and possible water restrictions.

“Do I want a shower or a handful of almonds?” he joked.

His crops have yet to make him face that choice.

“The reality is that drought years are easier for a vegetable farmer, and the tougher years are when you get the real wet rain here, because it’s hard to get things planted,” Johnson said. “The soil’s got to dry up before you can get the tractor in. And then we’ve had cold wet years where the tomatoes don’t ripen until a month later, or we weren’t able to plant them because it was too muddy. So [during] droughts, as long as I can turn on the well and get water, it does sort of make my job easier.”

Johnson still thinks there are ways to cut down on water use.

“I don’t consider [growing food] wasting water, it’s just using it, although it does need to be used wisely. People have to realize the value of water, and pay more for it, and then [they] will use it wisely. When they’re getting it for almost free, it’s a waste of resources if you’re not having to pay the cost of it.”

The Davis Farmers Market is located at Central Park on Fourth and C streets, Saturdays from 8 a.m. to 1 p.m. and Wednesdays from 2 to 6 p.m.