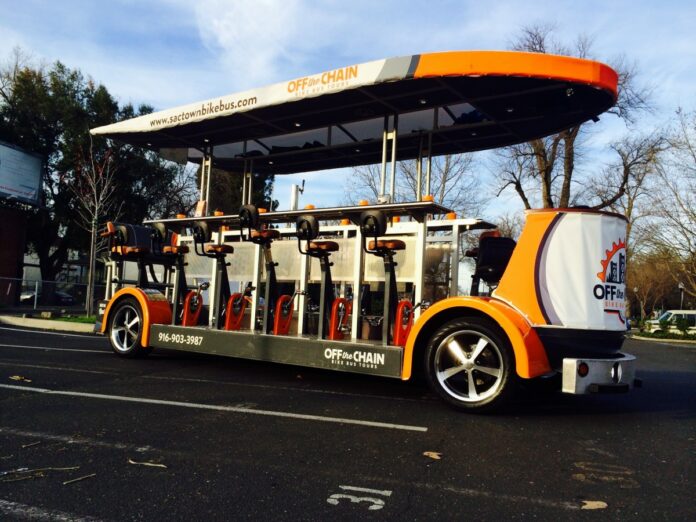 People might soon be able to drink alcohol while biking around Sacramento, or at least while having the option to pedal, as they occupy one of 15 seats in a ‘bike bus’ that is steered by a sober chauffeur.

According to Off the Chain Bike Bus Tours’ website, these ‘bike buses,’ or quadricycle vehicles, average about 6 mph as they travel the streets, making stops between various pre- or customer-selected destinations around the city. These stops often include restaurants, bars and breweries. However, due to current California state laws, alcohol consumption on board is not permitted. This could change with the passage of Senate Bill 530.

Sponsored by State Senator Richard Pan (D) District 6, Sacramento, the bill cleared its first committee with a 10-1 vote on April 29.

According to Sen. Pan’s website, “[Senate Bill 530] will create standards for inspection and safety measures for pedal-powered quadricycle operations, or ‘beer bikes’ and prohibit the consumption of an alcoholic beverage on the bike unless the local jurisdiction authorizes consumption giving power to local government.”

If it becomes a law, cities like Sacramento will have to decide whether or not to allow bike bus businesses to serve alcohol while touring their streets.

According to Linda Tucker, media and communications manager for the City of Sacramento, the city is reviewing the bill to determine if it will take a position.

“Currently, [the city] does not regulate beer bikes,” Tucker said in an email.

Off the Chain co-founder, Todd Sebastian, says his business has customized a trailer that allows them to transport the bike bus to locations outside of downtown Sacramento. Davis residents could also envision the bike buses on their own streets.

“[Hopefully the city of Sacramento] continues to be as supportive [of Off the Chain] as it has. I would like to hope that it becomes a reality,” Sebastian said.

“If it is considered, we’d have to look at the public safety issues that might be raised by the city’s Police Department and Public Works Department, as well as concerns, if any, from the general public,” Lee said in an email.

Sacramento resident Jon Miles went on a bar hopping tour with Sac Brew Bike in November. He speculated about how his experience would have been different if his group could have consumed alcohol on the bike.

“It probably would have been a more private event because we never would have had to get off the bike,” Miles said. “That would be great if you are just looking to hang out with your friends and not fight the bar crowd in Midtown.”