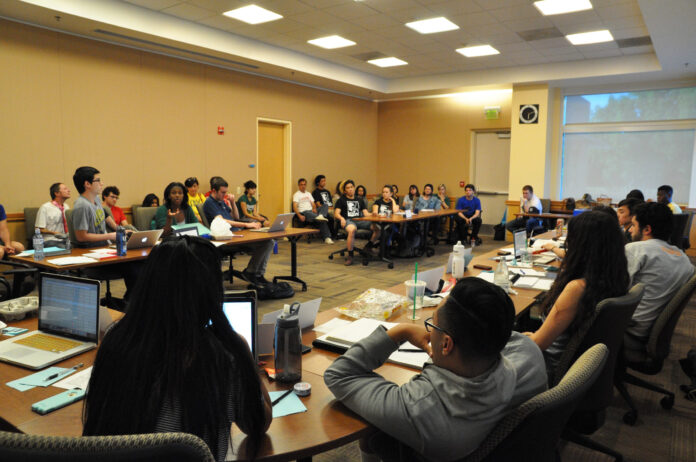 Close to 80 KDVS staff members showed up to the unit’s ASUCD senate budget hearing today in protest of proposed cuts.

“The association is in a lot of debt and needed to make cuts, and every time these cuts happen, the media takes a hit. I informed my network, the community that is KDVS and said we need to show that we’re still valid, important, valuable to this community and won’t take being bullied,” said KDVS General Manager Ashley Hanson. “Rather than giving my staff a retelling of what goes on in there, I invited them to come see for themselves. We are here to put on our best faces and show why we deserve to be supported.”

Hanson’s originally proposed budget planned for a $35,225 ASUCD subsidy, but the executive team cut the number to $25,180. Since KDVS is a media unit and falls under Campus Media Board budget guidelines, ASUCD senators only have control over the association’s subsidy to the unit and cannot change other line items.

“We’ve become very fixed with the things we identify with. These are the things that we are do and to think that we aren’t going to do them anymore is reconsidering who we are,” Hanson said. “We are starting to lose limbs rather than grow, which is sad.”

KDVS staff members rotated in groups in and out of ARC Meeting Room 1, where the budget hearing took place, because of a maximum capacity of 68 people.

As a unit, KDVS has cut its record label and seven paid positions this year, instead offering internship credit for the same roles.

According to ASUCD President Mariah Watson, the association as a whole plans to cut a total of $240,000 across all 26 units this year.

Ritika Iyer can be reached at campus@theaggie.org.