How food trucks are revolutionizing Davis, one wheel at a time 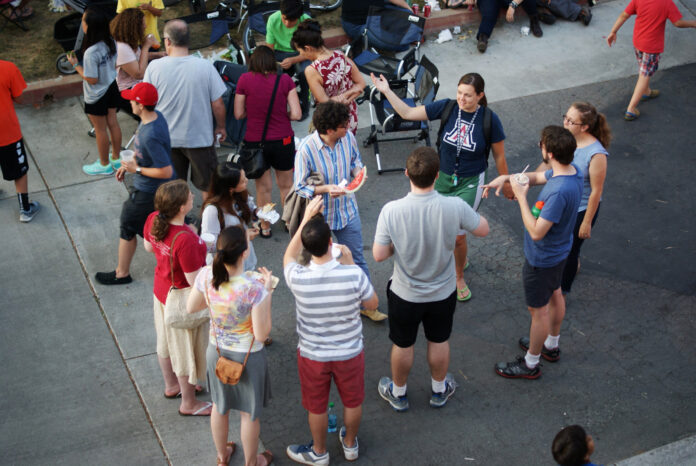 Last Friday, the food trucks came to town once again.

Hosted by the Davis Dirt, the Street Food Rodeo is a biannual event that brings locals together for the sake of community, entertainment and gourmet street food.

Annie Meckstroth helped organize the event, which celebrated its sixth appearance since 2012. As co-editor and owner of the Davis Dirt, Meckstroth hoped to provide the community with an evening of fun for the whole family, in a location that is accessible on a late Friday afternoon.

“This is the sixth Rodeo we’ve done, so we’ve tried to use [food trucks] that we know have good food,” Meckstroth said. “We [personally] select who we want, from [responses] we’ve heard in the past.”

With so many options available for the public, a variety of taste palettes could be satisfied at the event. Terry Jeski, owner of the little red truck for Volks Waffle, has been catering and selling his Belgian waffles since 1989 and since about 2005 in his truck at events like the Street Food Rodeo. This is his first year selling “Liège Dough Waffles,” a treat smothered in ice cream and chocolate, at the Rodeo.

“I’ve been doing this before anyone else,” Jeski said, “[My food is] different, [because] you can only take so much pizza!” Jeski said.

Miles Matsuoka, from the Slightly Skewed  truck, has sold grilled Asian-style skewers at the Street Food Rodeo three times since its inception, and has watched the Davis food scene grow over time.

“It’s like an outdoor food court but you are expecting a little higher quality stuff,” Matsuoka said.

The Street Food Rodeo gives Davis residents the opportunity to try items that they otherwise would not have sought out on thier own.

“I’m sure a lot of people haven’t heard of the stuff on our menu, there’s a bunch of food people haven’t tried that you may not order at a restaurant,” Matsuoka said. “But you come out here, you’re more inclined to try a bunch of stuff, so that’s kind of cool.”

Paul Grant, from Addy’s Paella, agrees with both Jeski and Matsuoka. Though his festival style tent is not a food truck, his experience as a vendor is not diminished.

“It’s interesting being a tent in a world of trucks, but it has its advantages,” Grant said. “We’re mobile in a different way and we’re really very nimble, and that allows us to take the jobs that sound good, that sound fun, and that way we get the greatest appreciation out of everything that we do.”

The Rodeo is unique because it serves quick, but gourmet mobile food.

“People want fast food, but restaurants are a commitment,” Grant said. “You can come here and try everything, and that is huge.”

The diversity of a food truck event is what carries the spirit of the Rodeo, as well as the SactoMoFo in Sacramento and Off the Grid in the Bay Area.

“You can get one of these and one of those; everybody tries what they like.” Grant said. “You can get a little bit on sensory overload here too, and that can be fun too. There are so  many things to try that it’s hard to pick.”

When it comes to the business behind the high windows, or under the awnings, Grant understands that his work does not go unappreciated.

“Everyone out here is here because they love food, not because they’re just trying to turn a dollar,” Grant said, “We love gourmet food as much as anyone who’s going to stand in line tonight. [Visitors are] happy to have all those choices, and really appreciate that and the work that goes into the food.”

The vendors are not the only ones who benefit from the Rodeo. Hundreds of people filed in line and waited patiently for the trucks to open long before the event even began, in anticipation for the taste, sounds and smells of a community event. When asked how the community responds to the Street Food Rodeo, Meckstroth explained that it’s all about the people.

“The best part for us is that it’s fun to hold a community event. It’s fun to bring people together that wouldn’t necessarily [come together], and it’s a part of their community,” Meckstroth said.

Grant grew up locally, and knows that Davis is the perfect place for food trucks to park and serve.

“This is a whole different community, and we’re certainly proud to be a part of it, because we believe in it and that’s why we got started,” Grant said. “This is a town that can really appreciate what the vendors are doing and put into it.”