Women’s Team of the Year: Golf 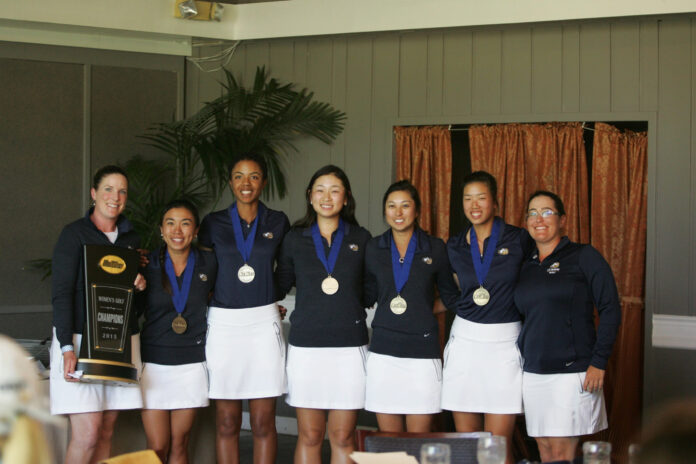 After an outstanding year, which culminated in an 11th place finish in the NCAA Finals, UC Davis women’s golf has been named the Aggie Women’s Team of the Year.

The Aggies started their year off with phenomenal play, taking third, second and third in their first three tournaments. The team scored several early individual wins as well, with junior Andrea Wong finishing in first for stroke play at the East & West Match Play Challenge and sophomore Paige Lee and senior Blair Lewis tying for fourth at the Edean Ihlanfeldt Invitational. Still, the team stumbled into their mid-season break at the Stanford Intercollegiate, finishing No. 13 out of 17. This was an early test against some of the best in the country, with athletes from USC and University of Washington competing.

After their trying trip to Palo Alto, UC Davis entered the spring season ranked No. 30 in the country, ready for another trip to face off against Stanford. The Aggies bounced back nicely in their return, finishing in second place just three strokes behind University of Oregon. Lee ended play on top of the leaderboards, her first individual victory as a collegiate player.

With Stanford behind them, the Aggies quickly took seventh in the UC Irvine Invitational before ripping off a stretch of four straight top three finishes, including a dominant victory at the Big West Championships. Their championship marked the sixth straight year that the Aggies have won. Four UC Davis players finished within the top five individually.

The stretch of high finishes moved UC Davis to a No. 20 ranking nationally and rewarded them with a trip to the NCAA Regionals in South Bend, Ind. The Aggies finished fourth at the Regionals behind a fifth place individual finish from Lewis. Lee also made her way into the top fifteen, helping UC Davis earn a spot in the NCAA Finals.

The Aggies fought valiantly at the finals, making the cut after the third round before being eliminated. UC Davis fell four strokes short of advancing into the top eight, a spot that the team hovered near through the entirety of the tournament. With that, the Aggies finished their season ranked No. 20 nationally.

Additionally, members of the team found significant success individually. Lee is currently ranked No. 41 in the country, while Wong is right behind at No. 50. She was also named a 2014-15 All-American honorable mention by the Women’s Golf Coaches Association, the third All-American in program history. Lee was a big part of another successful season for the consistently excellent UC Davis women’s golf team.