Male Team of the Year: Basketball 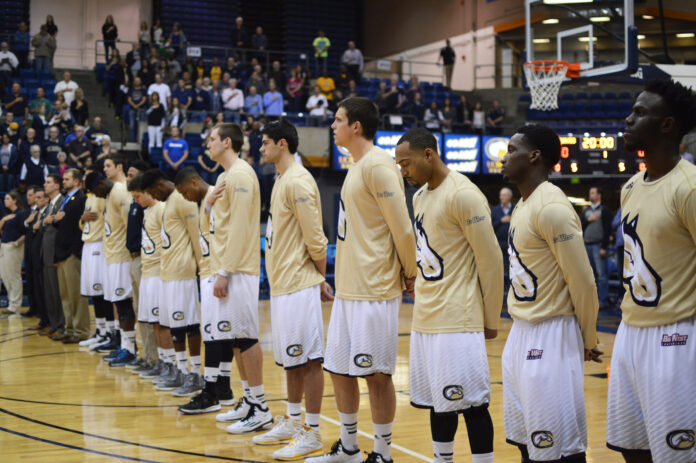 A Big West regular season title and a perfect home record of 14-0 at the Pavilion are just some of the evidence for why UC Davis men’s basketball has been named The Aggie’s Men’s Team of the Year.

UC Davis started its season with outstanding play both in the Pavilion and on the road.  Combining incredible passing with several outstanding shooters from beyond the arc, the team found the winning formula.

The Pavilion was a house of perfection as the Aggies finished the season with zero losses at home.  Fans were gifted with heart-stoppers and clutch plays during the season as the resilient team pulled out win after win on home territory.

Head coach Jim Les proved to everybody that he could helm a winning team with so many tough competitors in the league.  Leading the Aggies to their first conference championship and a Division I postseason appearance, Les made sure his team made a mark in the realm of college basketball.

Les, a good shooter in his playing days, instilled a game plan that involved plentiful passing and three-point shooting, eventually leading to the Big West Regular Season Championship.  For those who fear the Aggies will lose Les after his success, worry not.  After the season ended, Les signed a contract ensuring he will be with UC Davis through the 2020-2021 school year.

Senior guard Corey Hawkins exemplified dominance, poise and leadership on the court. He was the go-to player and could always be counted on to make the big play or change the momentum of a game.  With an unbelievable .503 shooting percentage from three-point land and a team high 39 steals, Hawkins has clearly made an impact on the court.

The Aggies, however, have also proven that they are not a one-man team.  A plethora of play-makers were on this season’s team, with each one adding to overall success during the season.  Senior guard Tyler Les made several clutch threes throughout the season while senior center Josh Ritchart provided size in the paint as well as a steady hand from beyond the arc.  A combination of steady role players like these led to successful passing, wide open shots and inevitable victories during the season.

Although the aforementioned seniors will not be with the team next year, many younger players have proven that they are capable of stepping up. Junior forward Josh Fox and sophomore point guard Darius Graham have shown the Aggies that they are willing and able to lead the team to further success in the upcoming years.  Fox and Graham’s momentum-changing and aggressive playing abilities have given the team and fans an offense power to look forward to.

Throughout the season, the Big West standings showed an incredibly tight race.  Despite UC Irvine’s stubborn presence in second place, the Aggies maintained their force and finished the year with the prized Big West title.

Entering the postseason, the team was in a brand new territory.  Post season basketball being a completely different experience compared with regular season play, The Aggies’ nerves appeared rattled.  The team pulled out a win in the quarterfinals against CSU Northridge which propelled them to the second round where they faced Hawaii.  Despite putting up a fight and a late game comeback, the Aggies fell to Hawaii.  It was a heartbreaking loss for the Aggies, but the team stood tall.

This was not the end of the road for the Aggies as their Big West Regular Season Championship had granted them an immediate spot in the National Invitational Tournament, but unfortunately for UC Davis fans, a first-round loss to Stanford was the only thing that came from it.

UC Davis men’s basketball was a beacon for success this year; they proved to the school, the fans and their opponents that UC Davis is a force to be reckoned with.