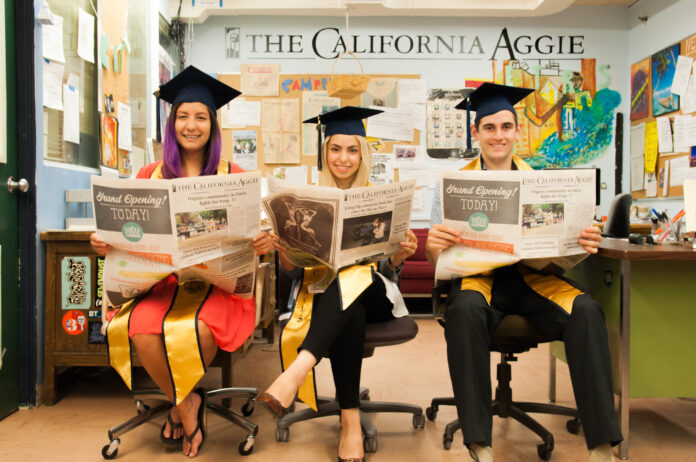 The Editorial Board says Goodbye

By MUNA SADEK
Editor in Chief

In my final weeks at the newsroom, even the things that were once so off-putting have begun to make it increasingly difficult to say goodbye. The windowless walls which occasionally dulled my spirits have become endearing; The tattered office chairs and couches, in my eyes, have become prized relics; The once reprehensible Justin Bieber poster that hangs above the sports desk is now “eclectic” and an homage to contemporary popular culture.

The start to this year was undoubtedly challenging for Aggie staffers. In the fall, the campus had become home to an entirely new class of students who had never seen a fully-stocked Aggie newsstand, and reporters and editors returned to a newly out of print paper on a completely volunteer basis.

They accepted the challenge. Editors worked unforgiving hours of the day to ensure that what was published was top-notch. They thought out-of-the-box to increase readership which had shifted to entirely online. They became cheerleaders, salesman, spokespeople, in addition to journalists, to pave an entirely new course of action to secure the paper’s continuation.

It earned the approval of our 2015-16 budget by the ASUCD Senate. The budget seeks to support a resurgence of three printed issues per quarter – roughly nine issues a year. Their unwavering dedication to The Aggie’s survival is only a testament to the impact it has and will continue to have on its staff and readers. It’s quite possibly the start to a new beginning.

Below, outgoing and incoming editors bid adieu to The Aggie’s graduating editors.

While he may at first seem intimidating with his over 6′ height and his constant talk of sports, spending a few minutes with Ryan will show that he’s really just a funny guy with a love for sweets and video games. Ryan has worked tirelessly for The Aggie these past two years, first as a reporter for the sports desk and this past year as the desk’s editor. He’s followed every game, enthusiastically contributed to editorial board meetings and taught his writers how to use their skills to report on matches, tournaments and post-game interviews. Along with that, he is also the friend that reminds people to breathe during stressful situations. Ryan will be following his dream of moving across the country when he starts school in August at Georgetown Law. While we are looking forward to see what he will do with his very bright future, we will miss his humor, his sports talk and his friendly face.

Who gives a f*#k about an oxford comma? Elise Nicolas, our Copy Chief sure does! Elise has been an incredible asset to the California Aggie for the past year. She’s spent hours on end each production night directing her team in perfecting news articles for publishing. Working at the Aggie around individuals with many of the same motivations and goals as her, she says, has been an experience she will never forget. Next year Elise plans on getting her teaching credential in hopes of pursuing her dream of becoming a high school English literature teacher. Though we are sad to see her go, we know she will excel wherever life takes her next.

The Arts Editor with the Ever Changing Hair, Akira Olivia Kumamoto

It’s the rare person who is able to juggle writing two honors theses, an editor position at the Aggie, an internship, a job at the library, and performing in an a cappella group – all while taking a full load of classes each quarter. Akira Olivia Kumamoto is one such person. But the best thing about Akira is not all of the wonderful things she has accomplished during her three short years here at Davis, but the sense of compassion and warmth that she brings to all that she does. She makes herself available to her writers, is kind and generous when the inevitable missed deadline occurs, and encourages derpiness and laughs from the group of [f]arts writers that she manages.

This fall, Akira will be taking her talents to journalism school at Berkeley. She will be sorely missed but she will leave behind the derpy group of arts writers she has trained, and (hopefully) the really awesome picture of Sam Weir from Freaks and Geeks that hangs above her desk. She will also no doubt have the time of her life studying something she is incredibly passionate about.

Whether it’s a perfectly crafted yet highly practical rainy day outfit or an extremely well-executed infographic about Yolo County health initiatives, Jennifer Wu never fails to impress. A graduating design student, Jenn has led The Aggie’s Art and Design team to extraordinary excellence this year. Her unique knack for creating beautiful visual representations of a wide variety of topics has made every accompanying newspaper article that much cooler. From managing tight deadlines for her desk to championing last minute graphic requests from us desk editors, Jenn really has made an amazing contribution to our staff and publication.

The Editorial Board will miss Jenn’s personality and talents greatly next year, but know she’s onto bigger and better things and we wish her the best. First up, a cross-country road trip. We have no doubt that Jenn’s creative juices will begin flowing on her trip and the cities of America will serve up some great inspiration for her upcoming artistic designs.

Muna spends a lot of time telling us editors and writers how much she appreciates us and how lucky she is to associate herself with all of us, but Muna, Muna, Muna, we, dear, are the lucky ones. Not only is Ms. Sadek just about the hardest-working, most passionate journalist and editor I – and anyone really – has ever met, but she is kind, considerate and somehow, extremely level-headed, even in the most difficult situations. This school year at The Aggie was a whirlwind of economic and emotional trials and Muna lead us through it all without ever breaking a sweat (not to mention her outfits were always on point?!). She is truly the definition of the just and compassionate leader.

Having just graduated, Muna will be interning at different media outlets this upcoming year. Her welcoming personality and unconditional understanding and love will be missed at The Aggie, but we cannot wait to see how far she will soar in her journalistic pursuits; love you Muna.