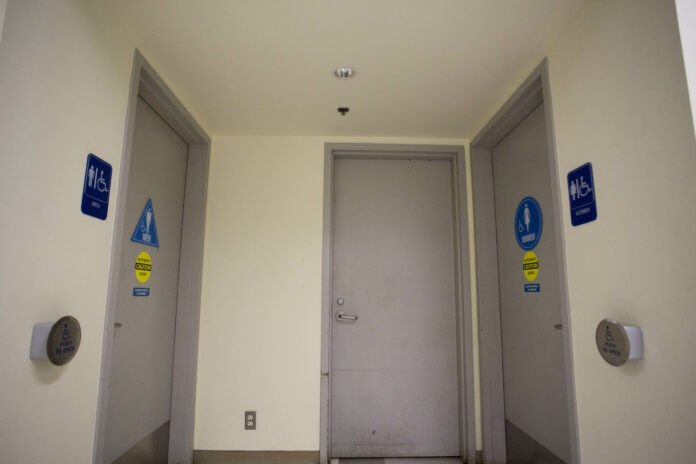 For thousands of transgender students across the country, a trip to the restroom is a far more difficult task than most of their cisgender peers could ever imagine. Apprehension over this topic can lead to anxiety, dysphoria and in extreme cases, serious problems with mental and physical health for many of those students.

In June, the U.S. Department of Justice expressed that denying him access to the restroom violated Title IX, a federal law that prohibits discrimination on the basis of sex in any federally funded education program or activity. With this, the Department of Justice officially affirmed that Title IX protects a student’s right to use the restroom that matches their gender identity.

“With my identity as a genderqueer person, I don’t feel comfortable using a women’s restroom. There’s a lot of anxiety for me surrounding that,” said Ruby Curiel, a LGBTQIA Center community intern and fourth-year sociology and Chicano/Chicana studies double major. “In this whole campus there are only two bathrooms I feel comfortable going in.”

These two bathrooms are the ones located in the Student Community Center (SCC) and the Women’s Resources and Research Center (WRRC) – both of which are gender-neutral. Restrooms designated only as male or female can become violent spaces for individuals who prefer to self-identify outside the binary.

For this reason, University of California (UC) President Janet Napolitano appointed a task force to closely examine the issue of equal access to restrooms across the UC system earlier this year. Napolitano also issued a directive on June 10 (which came into effect on July 1) requiring inventory of all single-stall restrooms on every UC campus and the conversion of these restrooms to gender-neutral ones by Feb. 28, 2016.

Curiel – who was considered a female at birth but now adopts “a more masculine presence” – has had unwelcoming experiences in restroom settings due to their identity.

“I was at a mall, and this lady was in the women’s restroom with her child,” Curiel said. “She just gave me a really horrified look. She was horrified I was there and quickly snatched away her child. It affected me because I’m not a bad person, but the way that she acted me made it seem like I was going to do something terrible.”

Curiel said people without similar kinds of experiences may be unable to understand that visiting the bathroom can be an intensely emotional and stressful experience. For Curiel, the Chicano/Chicana and LGBTQIA communities on campus are where they feel most comfortable. Outside of these spaces, they do not feel entirely safe, supported or even welcome.

The Harassment and Discrimination Assistance and Prevention Program (HDAPP), which seeks to prevent issues that violate Title IX protections, is actively working to address this safety concern and the courses of action outlined President Napolitano’s directive.

“We have already completed our inventory of all the single-stall and we are developing a new plan for integrating gender-neutral restrooms,” said Lisa Brodkey, the HDAPP director. “And the next phase would be to make a plan for converting multi-stall restrooms. The idea is that no one is more than a two-minute walk away from a restroom that meets their needs.”

Brodkey also belongs to a work group involving the directors of the LGBTQIA Center, WRRC and other campus organizations. The group, chaired by Assistant Vice Chancellor Allen Tollefson, works in tandem with various construction, office and event planning committees. According to Brodkey, many planners booking events at the ARC and Mondavi Center have expressed an interest in providing gender-inclusive facilities for their attendees, and a commitment is already in place to ensure that any new buildings on campus will be designed with gender-neutral restrooms.

These major changes will require an announcement and effort to inform the larger UC Davis community about Title IX protections and subsequent actions.

“I think it’s Allen Tollefson’s intent to work with Strategic Communications to help people understand what the need is, what President Napolitano’s directive is and why we’re doing what we’re doing,” Brodkey said. “I do think there are some individual units on campus who are engaged in the work that we do. In a broader perspective though, it’s going to take a lot of people to collaborate with us and educate them on this issue.”

On a national level, the education effort is spearheaded by Asaf Orr, the Transgender Youth Project Staff Attorney at the National Center for Lesbian Rights.     Orr co-authored Schools in Transition, which provides information about how to support transgender individuals. In the publication, Orr also acknowledges the importance of supporting school administrators, as they often receive backlash from the surrounding community when attempting to integrate more inclusive policies. He believes that the concerns do not come from a place of understanding but rather misinformation, and that schools can be better prepared to inform the community at large about the needs of transgender students.

Orr also stressed that allies of the LGBTQIA community can participate in the effort to make this Title IX protection more visible and pervasive.

“Allies shouldn’t assume that a space on campus is safe. They should really reach out to trans and gender nonconforming friends and find out what more they can do,” Orr said. “In schools where there’s this negative response to what has happened, allies should attend board meetings and speak out publicly. They can say, ‘I’m non-genderqueer or non-trans but I still find this issue important.’”

At UC Davis, allies can participate in foundation training at the LGBTQIA center, which educates administrators, students and faculty about the significance of being an ally and issues like privilege, identity, oppression and social justice issues—including equal access to restrooms. Curiel assists allyship training and is passionate about deconstructing the concept of gender.

“It’s very upsetting to see that a school can shape the way people grow up and contribute to an oppressive society,” Curiel said. “I think the way we as a society enforce gender upon children is in itself really harmful and restrictive. It’s important to educate youth how gender is a social construct and it’s not inherently natural.”

However, as sex-discrimination cases nationwide demonstrate, it appears that education is only one step towards progress. Litigation is often necessary to create fully gender-inclusive policies in schools and universities.

“That’s where the promise of Title IX comes in,” Orr said. “With Title IX, we can create environments where students can feel comfortable expressing their identity in whatever way they see fit.”