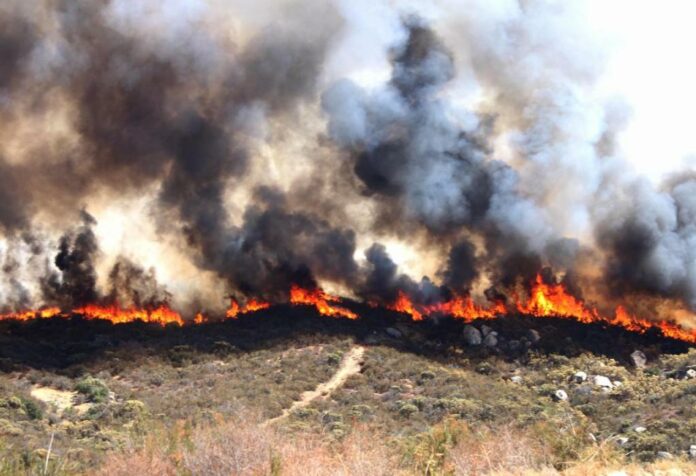 Smoke from fires in Northern California effect air quality in nearby counties.

The Butte and Valley fires, which began on Sept. 9 and 12 respectively, have recently spread smoke and ash throughout Yolo County.

Since the Wragg fire broke out on July 22 near Lake Berryessa, Northern California has been plagued with a series of wildfires, many of which are still burning. As particulate matter from the fires get into the air, health advisories have been sent out when air quality becomes threatening to health.

“We have had four major fires that have impacted our area going all the way back to late July with the Wragg Fire here at Lake Berryessa,” said Tom Hall, Public Information Officer at the Yolo-Solano Air Quality Management District.

Hall explains that a very small amount of particulate matter present in air can be considered dangerous. He adds that, according to the Environmental Protection Agency (EPA), a concentration of 35 micrograms per cubic meter can be considered unhealthy over a 24 hour time period.

“It’s a remarkably small concentration but even scientific studies have proven that that can impair lung function and impact cardiovascular performance as well,” Hall said.

Hall said Yolo County has been fortunate this summer in only having a few days where air quality was considered unhealthy for 24 hours and a few instances where it was unhealthy for a few hours. He adds that the smoke would only drastically impact health if exposure was prolonged or if air quality was worse.

Yolo County Health Officer Dr. Constance Caldwell explains that most of the air quality advisories in Yolo County were for air that was unhealthy for sensitive groups.

“Mostly, the sensitive groups who should be careful are those with any sort of lung disease, although also folks with serious heart disease should also be careful. Mostly what they will experience would be shortness of breath, coughing and chest pain. If they are prone to any sort of respiratory exacerbations like asthma attacks, the smoke could bring that on, particularly if they are trying to exercise out of doors on those days,” Caldwell said.

In addition to people with lung disease, heart disease and asthma, infants and young children should take the same precautions as those in the sensitive group.