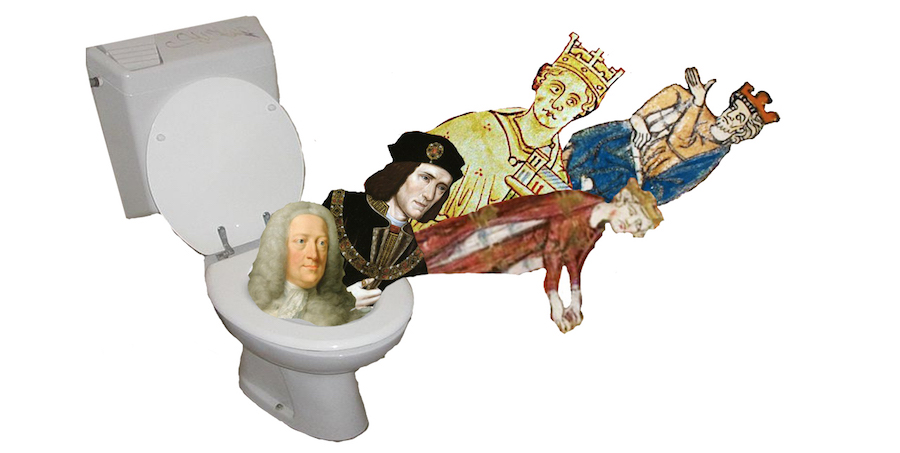 Unless you’re a buff or nerd, history may be a boring subject. One UC Davis professor by the name of Andrea Lorraine felt that this was an important challenge, and decided she would make the first day of history class a day to remember for her students. She thought that if she focused on the more bizarre facts, she could get her students more interested in research. That’s why her first lecture was titled “Five Kings Who Died Via Butt.” The topic, which gave an interesting perspective on how the royal jewels have gotten more protection than the royal derriere, got an instant response.

Here are the stories Professor Lorraine discussed in class:

This Saxon King died on Nov. 30,1016, 50 years before the Normans invaded. Edmund was only king for eight months, and spent most of his reign fighting Danish Vikings that tried to invade and take over the country. Although he failed to keep England safe, he did give historians some fun reading. According to legend, Edmund II was going to the privy (a.k.a. bathroom, a.k.a. a giant hole in the ground to poop in) when he was fatally stabbed by a Viking hiding below. Granted it’s a weird story, and there is little evidence to back it up, but it’s one of those historical moments that people love to think is true.

John I — Im-peach-ing a King

King John is possibly the least favorite of all the monarchs in English history. He’s the kind of monarch that would appear at a WWE wrestling match with an antagonist persona. He earned the ire of France, his allies, his barons, his own family and he might as well have also pissed off his own mirror reflection. You’d think he would have died by an assassin, or executed by angry lords. Nope. He died in 1216 from dysentery after eating too many peaches (side effects include apocalyptic diarrhea).

Where John may have the victim of bad historical press and a few bad peaches, Edward II might have even less to show for his time as king. Reigning from 1307-1327, his allegedly weak reign was so unpopular that he was overthrown by barons led by his own wife (marriage counselors had not been invented yet). While in captivity, Edward died under suspicious circumstances that have led to multiple conspiracy theories. One particularly gruesome theory was that he was tortured to death with a red hot poker, and since this column is about butt-related deaths, you’ll forgive me if I stop describing any more details. Sorry Ed.

While some kings get famous for their positive examples, Richard III seems to get amazing press for being the bad boy of English monarchs. He inspired the Shakespeare play that takes his name, the character of Frank Underwood from “House of Cards” and even Benedict Cumberbatch, who, after nearly six centuries, delivered his eulogy (I smell an Oscar). Richard died in the battle of Bosworth field in 1485, making him the last king to die in battle (sweet title). What wasn’t so sweet was that after he was killed, his naked body was allegedly paraded past the victorious troops who possibly celebrated by stabbing his corpse. One of them decided to stab him in the butt (not cool, dude). Although Richard III got the short end of the stick in his day, he still gets a great deal of publicity compared to the last king on our list.

At the height of his power and prestige, George II’s empire reached across the planet. He beat back rebellions, won multiple wars against the French and lived a longer and more lavish life than any of his predecessors. Unfortunately, his death was far less compelling than most royal deaths. On the morning of Oct. 25, 1760, George II drank some hot cocoa, went to the bathroom, and died of a ruptured heart valve at the age of 77. Not so much of a “You can take this throne over my cold dead butt,” but more of a “Help, I’ve fallen and I can’t get up” type of death.

Since starting off her lectures with the provocative material, Professor Lorraine has faced little to no scrutiny from peers and students. She even gave extra credit opportunities to anyone who could find more interesting and surprisingly true stories from Western history. So far, students have submitted papers such as “Egyptian mummies being turned into powder for medical uses,” “the history of chocolate” and “Modena versus Bologna: The War of the Bucket” (no seriously, there was a war over a bucket).