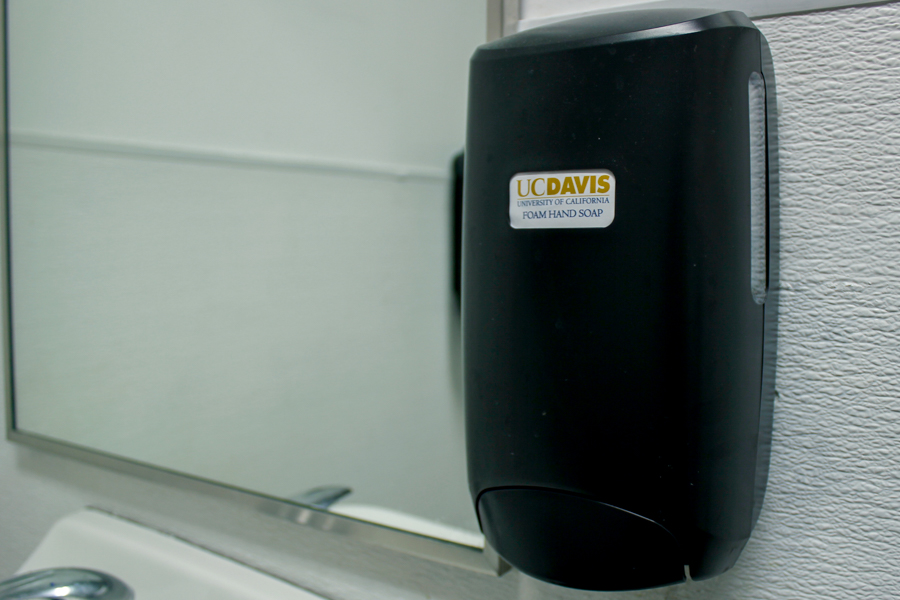 In a poll released by The Aggie, the bathroom soap dispensers were voted the least aesthetically pleasing items, both big and small, on campus. Driving this result were the plaques on the dispensers that read “UC Davis” in bright yellow. They beat out Olson Hall in its entirety, Social Science’s enormous staircase, the first floor men’s bathroom in Shields Library and the very small roundabout near Rock Hall that serves no function.

The soap dispensers, the smallest item on the list of finalists, come in the biggest numbers as they exist in every bathroom. Students and faculty members are confused as to why they are even around. Many even suggest that the removal of the plaque from the dispensers would be the best option.

“I have been told that I need to specifically polish the plaques on the dispensers,” said Ron Beckett, a janitor at Shields Library. “I hate going into the first floor men’s room. It’s so ugly, and I hate polishing something so stupid and small. It makes me sick.”

Other students are fans of this look, but feel as though the plaques could be a little bit nicer in their general aesthetics.

“Honestly, I like that the soap dispensers are particular to Davis, I just wish that there wasn’t so much blank space on the plaques,” said Peter Lang, a fifth-year economics major. “I’d like to see less white and some more navy.”

The plaques’ 50-point landslide victory in defeating the rest of the least aesthetically pleasing candidates shows that students have strong opinions toward the emblems. Olson Hall looks like nothing more than a large piece of cement. The stairs at Social Sciences look like they were built for the Big Friendly Giant. The bathroom at Shields has ugly tiling and the stall doors are falling off. The roundabout near Rock doesn’t even exist: it’s about six feet in diameter, has yellow barricades that are far too bright and don’t match Aggie Gold and has zero purpose. None of these, however, hold the same combination of both lack of practicality and ugliness as the bathroom plaques. The font is just slightly off, and so are the colors.

The school has yet to decide if they want to change the plaque design, whether through color changes or complete removal. UC Davis administration has announced that something will differ by the start of the 2020 school year, but is waiting on research results on the subject.

You can reach ETHAN VICTOR at ejvictor@ucdavis.edu or read the nonsense he posts in the Twittersphere @thejvictor