Since its inception in Southern California, Insomniac Events relaunched Audiotistic after a six year hiatus. The one-day event was brought to the San Francisco Bay Area and aimed to blend rap and dance music harmoniously. After hosting the marvelous cosmicMEADOW stage at Electric Daisy Carnival Las Vegas, without a doubt the Audiotistic brand came to entertain fans with two magnificent stages at the Shoreline Amphitheater and Grounds.

As with most Insomniac events, entering the venue went smoothly, as the event promoter aspires to make the experience memorable from start to finish. There were multiple lines for identification check and ticket scanning making entry a breeze for attendees and myself. As I roamed around the festival, food trucks and concession stands were scattered across the venue giving festival-goers multiple food options. I walked around some more and could see Insomniac’s dedication to health and wellness. Two water stations provided free water to guests to keep themselves hydrated. Positive-minded individuals with purple shirts or tanks could also be seen wandering around the venue with their backpacks packed to brim with essentials and water. They’re called “Ground Control” and they’re job is to make Audiotistic fun and safe for everyone who attends by seeking those who may be in need of medical or emotional support.

Two extraordinary outdoor stages adorned the grounds—the bigger one called “Frequency 1.1” and the smaller one dubbed “Frequency 2.2.” With Habstrakt’s recent collaboration with Skrillex, I started my day off with some “Chicken Soup” at Frequency 1.1.  Habstrakt was a transition master filled with heavy bass riffs that made the crowd dance. Up next, Ghastly made his way to the stage and made the crowd headbang with authority. Afterward, NGHTMRE made his way to the stage with producer-duo Slander meaning it was for the trio to bring “Gud Vibrations” to the Bay Area—a surprise to many. Because Slander were slated to play from 6-7p.m. and NGHTMRE, for one hour after, their time on stage turned into a two hour megaset. 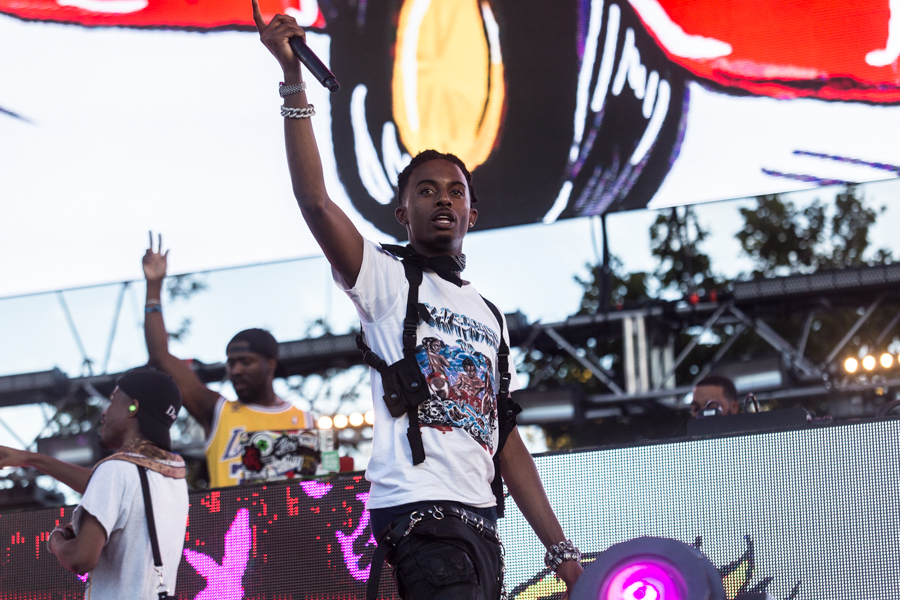 Insomniac didn’t stop with the surprises because Playboi Carti and Lil Uzi Vert played a one hour superset at Frequency 1.1. Both artists took command of the stage with their own hit songs, and then, of course, with the duo’s hit single “Woke Up Like This.” Point Point extended their set until to 7:45, so I bounced on over to Frequency 2.2 to see them. Their unique sound filled the set with joyous positive melodies and remixes.

I made my way back to Frequency 1.1 to catch Flosstradamus, which is now spearheaded by Curt Cameruci since Josh Young departed to work on a solo career. His set started off strong and kept the energy going with seamless transitions that kept the crowd on their feet. Finally, Marshmello donned the stage equipped with his signature LED helmet to keep his identity a “secret.” Highlights of his set included various throwbacks to 90s alternative rock and his hits, such as “Ritual” and “Summer.” Overall, Insomniac’s reincarnation of Audiotistic was a dream for all “Headliners” — Insomniac’s word for attendees. Pasquale Rotella, Insomniac’s CEO and found, previously announced that Beyond Wonderland wasn’t coming back to the Bay Area, so Audiotistic gave us something to look forward to—especially for those of us that couldn’t make the trip to Electric Daisy Carnival Las Vegas. Hopefully, the event comes back next year, bolder and bigger than ever.