Humor: Argue basketball with me and I’ll fall in love 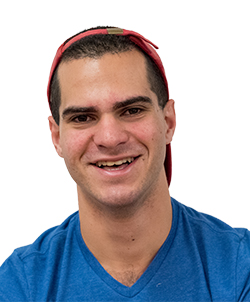 Looking at common interests in relationships

I visited my housemate in Colombia over Winter Break.

We went to the coast to celebrate New Year’s with his sister and her boyfriend, and we met his sister’s friends, a newlywed couple from Mexico City. They were living proof of the idiom “opposites attract.” The wife was lively, energetic, outspoken, assertive. She demanded that techno music be played at their wedding; she knew all the best clubs in Barcelona, and she was the first to hit the dance floor when we got to the club to celebrate the new year.

Her husband, on the other hand, didn’t say much when we first met him, but he was nice enough. His wife did most of the talking, and he seemed content to just observe. I asked him some questions, and once I hit something he was passionate about, be it European health policy or the state of modern rock music, his eyes would light up and he’d rattle off eight different thoughts in five sentences. His party happened in the club hallways, where he would chat with a beer in his hand. He was a classic introvert, and she a classic extrovert.

Two completely different people. One took charge of every room she entered, the other absorbed her energy and internalized it. I was able to have one conversation with her and a totally different one with him. Even though we were all speaking English (and the occasional “mas aguardiente” from the token American), they each seemed to have their own separate language. It was a miracle they understood each other.

Only when I asked them the most mundane, boring question in the world did I find out how they made their marriage work.

“What do you do for a living?”

He’s getting his master’s in public policy. She’s working for the United Nations, helping resettle refugees from Venezuela and Colombia.

I’ve heard two ideas about the role of common interests in relationships. The obvious one is that common interests matter. What we enjoy doing, what we associate ourselves with, what we spend our precious little free time doing definitely matters when finding our partners. For some, two people with lots in common is exactly what a partnership should look like. That is part of the definition of a relationship to them: two people that trust each other and want to spend time together and have physical chemistry — and also have a lot in common. And I understand this point.

A girl that can argue basketball with me? You’re goddamn right I’ll respond to those texts.

On the other hand, one of my older friends once told me that she thinks it’s narcissistic to expect your partner to like the same things you do. In placing a premium on someone liking the same music as you, you’re only doing it so that you can listen to your own music while spending “quality time” with your boo. I see this point, too. I had an ex-girlfriend that only liked the shows I hated, and hated the shows I was obsessed with. Seeing her made me happy. Watching TV with her made me wonder if robots could ever be realistic enough to pass for humans so that they could be suitable spouses. But we shared enough of the same values that it didn’t matter to me that she liked country music and wanted to see the same Grey’s Anatomy episode again (all they do is have sex and die in horrific freak accidents — I still don’t get the point). We weren’t really able to talk about music, but talked about our hopes, our dreams, our fears and what our next meal would be because damn, did we love food.

That Mexican couple doesn’t have the same go-to playlists on Spotify, but they live, breathe and eat politics. They know what they want to dedicate their lives to — what they want to spend their working hours, their social hours, their waking hours thinking and talking about. They share incredible meaning and pleasure in something that’s both extraneous and deeply a part of them.

It’s not just things as significant as a life path or career. Sometimes we like what we like for the pleasure of it. I like plantains because they’re delicious. No backstory there. I love coffee because it reminds me of my mom and dad serving cappuccinos after hosting dinner parties, as Israelis customarily do — coffee was usually around when their guests would turn and welcomed me into their conversations. I love coffee because I feel like myself when I’m sipping an espresso while hammering away at my keyboard in a coffee shop. So whenever I drink it anywhere else, I’m reminded of how I see myself as a creative person. I have reasons for coffee.

Meeting someone who has her reasons for enjoying coffee isn’t about drinking some dank, overpriced coffee at my favorite espresso bar in San Francisco or her favorite coffee shop in Brooklyn. What matters is that we have a shared meaning for a part of our lives that we enjoy together. A strong, healthy relationship isn’t just about two people enjoying each other, physically or emotionally. You can physically enjoy many people (as seen in hook-ups) and you can emotionally enjoy many other people (such as your friends).

It’s about two people who are able to connect the dots on what they enjoy, to what they value, to who they are.