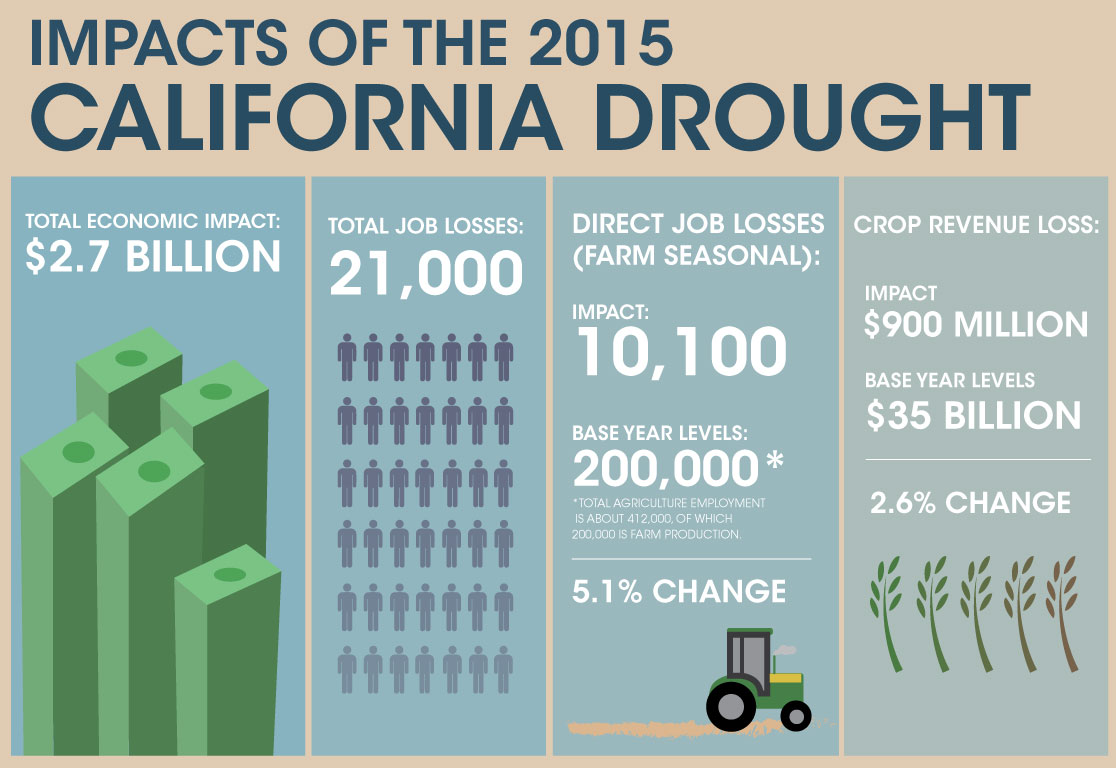 Despite popular belief, recent rains may not be enough to pull California out of aquatic state of emergency

In January 2014, Governor Jerry Brown declared a drought state of emergency in California due to record-breaking dry conditions that began in 2011 and have affected areas from San Diego to Modoc Counties. Despite stereotypes of Californians’ hatred for all things rain, winter storms over the past month have blessed the state with hopeful feelings of a farewell to the drought. While the arid and dusty vegetation needs it, this increase in precipitation may not sufficiently pull California out of its ecological state of emergency just yet.

“The water system in California is very articulated and the main source of water is the snowpack in the Sierra Nevada,” said Daniele Zaccaria, the assistant cooperative extension specialist at the UC Davis Department of Land, Air and Water Resources. “Snow melt fills the reservoir in the bottom of the mountains, and the water moves into different areas of the state based on needs. Not all of the state is connected to this supply grid because some coastal areas rely on groundwater.”

The drought conditions of the past five years have been so demanding that the state has had to rely more on its groundwater supply, which has seen drastic depletion. Groundwater is located in an aquifer underneath the earth’s surface and must be extracted using a well or drill.

“The drought impacted much of California’s groundwater because there was so much overdraft, especially in the San Joaquin Valley in central California,” Zaccaria said. “The groundwater there will be recharged very slowly over the years and will take many years to get the water to the level it was before the drought.”

Another main source of California’s water supply is its surface water, found on the earth’s surface in creeks, lakes or streams. According to Zaccaria, surface water supply is much more reliable than groundwater because if farmers use surface water, they do not have to spend energy and money to pump water from aquifers. This would create positive consequences down the line because farmers could theoretically cease drilling into the earth, which is expensive and harmful to the environment. Zaccaria said that recent increases in precipitation are a promising light at the end of the drought tunnel.

In terms of drought relief, Zaccaria said that conditions are much better than they have been in previous years. However, a lot of this precipitation is coming down as rainfall instead of snow because of global temperatures rising. This is unfortunate because the majority of this rain will run off the surface of the earth into the ocean, causing landslides and nutrient depletion.

“A really wet winter is great, it doesn’t necessarily mean that the drought is over,” said Elise Gornish, a cooperative extension specialist in Restoration Plant Sciences at UC Davis. “Many of our water sources are being replenished but unfortunately since we’ve had drought for so long, vegetation has died in many areas and the rain is actually enhancing erosion.”

Gornish believes the climate is changing in a way that will increase and intensify instances of drought. In addition, the long-term conversion of perennial farmland, like the almond orchards in the Davis area, will change the way the state is now using water. This will become an even greater problem in the future if drought conditions prevail.

“The earth becomes so dry that the topsoil and nutrients wash away, and if there aren’t any plants to anchor the soil, this leads to immense erosion problems,” Gornish said. “If the soil becomes too dry, you lose a lot of the microbial communities that you need to maintain healthy soils which feeds the downward spiral. Long periods of drought can create a change that is so drastic […] to the point where you can’t actually get back to a healthy ecosystem even with a [large surplus of water].”

California’s Mediterranean climate makes it a drought-prone area, so the state is likely to see fluctuations between dry and and wet years. Due to this, Zaccaria explained that it does not make sense to consider the state of the drought an emergency since there have been fluctuations between bad times and good within the last 60 to 100 years. However, the ecosystem is not the only thing that must adapt to the oscillating cycles of drought in the California climate. Humans must adapt and make necessary changes as well.

“Any time you have instances of rain, even after four-year aggravated drought, it lulls people into a false sense of security so that they relapse into their unsustainable behavior of water use,” Gornish said. “We need to start changing the way we think about about water. There are cities in California that need their water brought in every day, which just blows my mind. I think there will be long-term consequences that may not be solvable with our current behavior and policies.”

Zaccaria agreed that residents of California must be conscientious of their water habits and usage no matter what part of the state they live in. He explained that the argument that Northern California, with its agriculture presence, is to blame for the drought is nonsensical. The California water system was created to support agricultural development, which now is so prominent that the state produces the majority of food for internal and external consumption.

Austin Jelinski, a second-year environmental science and management major, is a Southern California native who recently noticed the divide in northern versus southern attitudes regarding the water controversy. Jelinski hypothesizes that Southern Californians may not acknowledge or take seriously the drought simply because they have not been educated on the severity of it.

“In a metropolitan area such as Los Angeles where you get your water fast, it can be easy to take it for granted [because] you’re removed from the issue of water conservation,” Jelinski said. “It is hard to hold people accountable for their actions if they do not know [the] consequences.”

Studying environmental science at UC Davis will allow Jelinski to apply his passion for science to the public sector by solving environmental solutions and making improvements in how humans use natural resources.

“Everyone has that one environmental issue that speaks to them individually as the root of all problems, and for [me] that problem is water,” Jelinski said. “The question is, are we going to be forced to make the change, or are we going to make the change before it hits us? We should be conserving water but also realizing that we need a bridge between science and policy in order to do so.”
Written by: Gillian Allen — features@theaggie.org