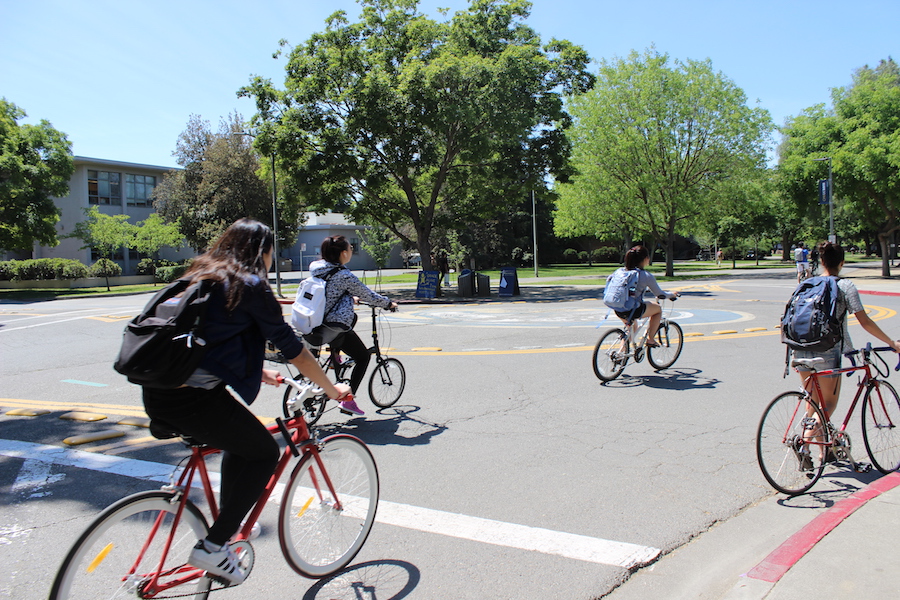 This May is bike month in the Sacramento region, meaning transit agencies and air quality organizations will be encouraging people to ride their bikes all throughout the month and on. UC Davis will be partaking in bike month as “the bike capital of America,” according to The Guardian.

UC Davis has many bike related events lined up for the month of May. One event is the Helmet Hair Don’t Care (HHDC) Bike Helmets and Bagels, which will take place on May 23 at 10 a.m. in the Bike Barn. This event is recruiting students, staff and faculty for a photo to be used as part of the 2017-2018 HHDC campaign material. Free bagels and Aggies Ride shirts will be available and funded through Transportation and Parking Services (TAPS).

“We are hoping to get a large gathering of the campus community wearing bike helmets to show that bike safety is a community wide effort,” said Shantille Connolly, a UC Davis wellness educator and creator of HHDC, via email.

Connolly started the HHDC campaign last fall in order to increase bike helmet access at UC Davis. HHDC allows students to receive a free helmet from the Bike Barn if they sign a pledge to wear a helmet while biking.

“Student Health and Counseling Services began focusing on bike helmets, because our ACHA-NCHA data from Spring 2015 showed that only 7.9% of students usually or always wear bike helmets,” Connolly said via email. “The national average for college campuses is around 39%.This huge gap represented a need for bike helmet promotion at UC Davis. Given the number of bikes on our campus on a daily basis, bike helmets are essential for unintentional injury prevention. Students are here to learn and expand their knowledge, but one bad accident can have deleterious effects to their academic success.”

The HHDC is also hosting a Bike Helmet Crafternoon at the LGBTQIA Resource Center on May 5 from 12:30 to 2 p.m. There will be glow in the dark puff paint, glow in the dark stars, decals and reflective tape available for decorating purposes. Students can receive a free helmet at Crafternoon.

One of two annual UC Davis bike auctions will be held on May 6 in the UC Davis Pavilion Parking Structure. The bicycles can be viewed from 7:30 to 9 a.m. with bidding beginning at 9 a.m. until all bikes are sold. TAPS disposes of abandoned, unclaimed bicycles at these publicly-held bike auctions. Over 400 bikes will be available for sale to the highest bidder.

“The auctions provide a way for Transportation Services (TAPS) to return abandoned, unclaimed bicycles to the community,” said Leslie Mancebo, the TAPS transportation demand and marketing coordinator, via email. “285 bidders participated in the Fall 2016 auction where we sold 422 bicycles. The average price per bike was $43.44.”

“I know many don’t consider it fashionable but it could mean the difference between having just a dented helmet or traumatic brain injury,” Bergstrom said via email.

“[Not signaling] is the number 1 cause of crashes on campus,” Bergstrom said via email. “I’ve watched a group of friends take each other out in a bike circle because each one was trying to go in a different direction […] I can’t stress this enough, no one likes the [unpredictable] person that thinks it’s a good idea to make a sudden left turn from the far right hand side of the bike path during rush hour.”