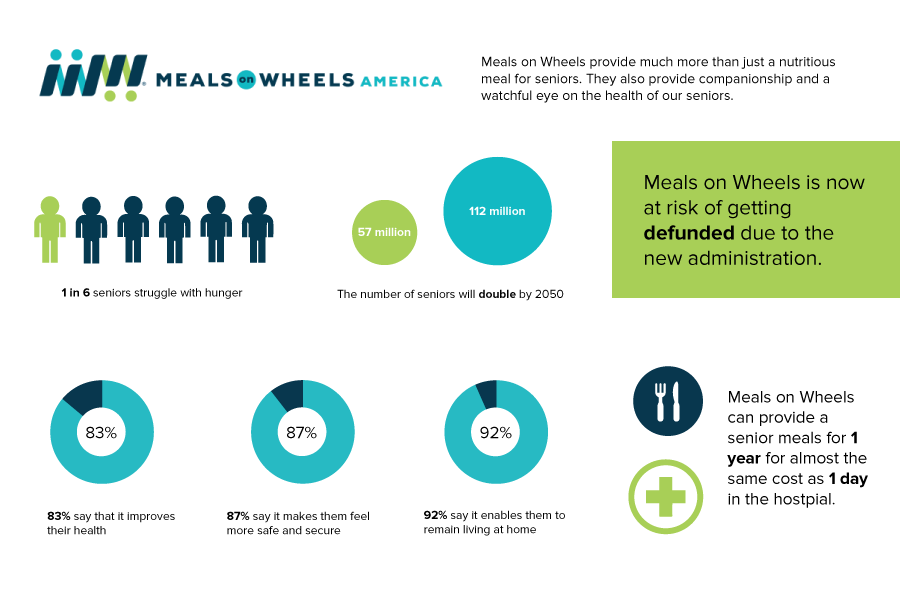 Senior citizens among many community members to possibly lose meals

A variety of programs are facing the potential of funding cuts, including the Meals on Wheels Association of America, due to the Trump administration’s plans to cut the federal budget in an attempt to bring an end to the nation’s never-ending budget deficit.

This program, created in order to help those struggling to find meals on a day-to-day basis, has become an important source of food for millions of senior citizens across the country, according to the Meals on Wheels website.

On the homepage, the association explains that “Meals on Wheels services are provided directly to seniors by a nationwide network of 5,000 local community-run programs.”

Within Sacramento and West Placer County, about 2,300 seniors receive the services provided by Meals on Wheels.

The local website for the association goes on to states that “Meals on Wheels helps keep seniors in their homes and communities by providing nutritious meals, safety net services, social contact, community resource information and much more. On average over 2,000 seniors participate in our programs in each weekday.”

However, this might not be the case if the push for cutting the budget successfully is enacted.

According to an article in The Davis Enterprise addressing the government’s focus on programs such as Meals on Wheels, “most of the nation’s 5,000 meal programs also rely on money from the Older Americans Act passed in 1965 to fund about 35 percent of the cost of the meals they serve […] The budget blueprint calls for an 18 percent cut to the budget of the Department of Health and Human Services, which administers the Act, and programs are bracing for more cuts.”

Essentially, the one program would lose about half of its federal funds. The article goes on to explain that Meals on Wheels is not the only program that might suffer if funds are cut drastically.

“Nursing home funding from Medicaid may be in trouble, too, if Congress cuts more than $800 billion out of the Medicaid over the next 10 years, which has been proposed,” the article reads.

While certain cities will see little effect in the wake of the new budget due to the larger percentage of income through personal donations, other cities that rely on federal money could see an increase in people going hungry.

The coordinator of Woodland Senior Center Bridget Luna explained that the Yolo County center provides meals for senior citizens through Meals on Wheels throughout the weekday.

“I think it will have a direct impact on the seniors here. If you take that [Meals on Wheels] away, they may not have any food.” Luna said. “They also come here to the senior center to eat their meals and experience socialization. If theirs is no café, they may not come here and socialize with people.”

This potential budget change raises some red flags not only for people relying on federal money but also for those witnessing the changes occurring to loved ones who might rely on programs like Meals on Wheels.