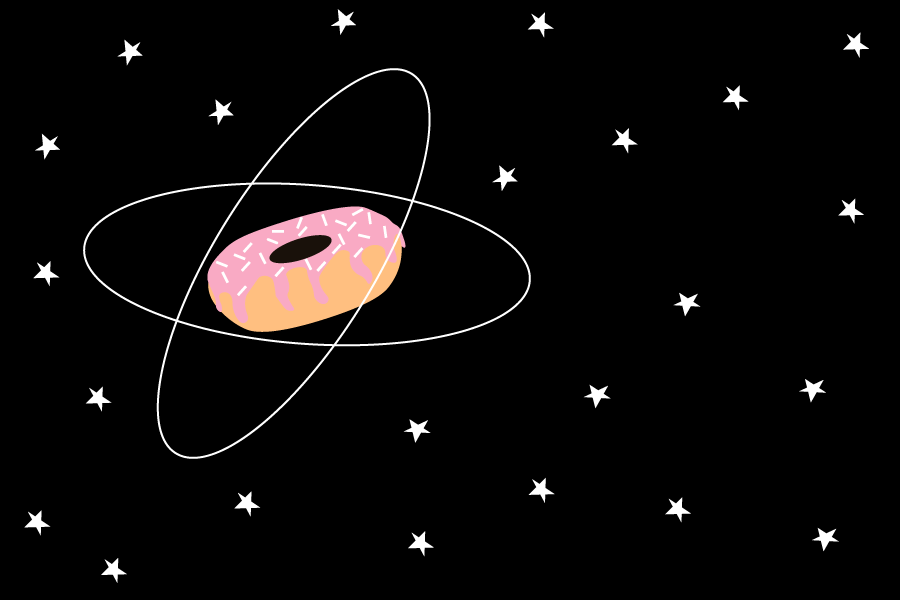 The giant-impact hypothesis is the most popular in explaining the moon’s origins and  matches up with the prominent theories of the solar system’s formation. But there are still many mysteries that have yet to be solved — and the research team of a Harvard graduate student and a UC Davis professor may have figured out part of the mystery.

Simon Lock, a graduate student at Harvard University, has suggested a piece of the puzzle in his article about the discovery of a new planetary object: the synestia.

The term “synestia” is derived from the prefix “syn-”, meaning “together”, and “Hestia”, the Greek goddess of the hearth and architecture. After the initial press release, the internet dubbed this object a “hot vaporized space donut”.

However, Sarah T. Stewart, an earth and planetary sciences professor at UC Davis and the co-author of Lock’s paper, doesn’t think that the description of “space donut” is entirely accurate. Stewart was a professor at Harvard for 11 years and continued to work with Lock even after her move to Davis in 2014.

A synestia is a biconcave disk, comparable to the shape of a red blood cell, and is mainly vaporized rock. When two planet-sized rotating objects collide with high enough temperature and angular momentum to pass the corotational limit, a synestia is formed.

The corotational limit refers to the point when the disk’s energy and mass can still be taken back into the planet and rotate as a single body. However, beyond this limit, the planet physically cannot be a normal spheroidal planet.

“Collisions between planets are incredibly energetic,” Lock said. “Two planet-sized bodies are coming together and colliding at tens of kilometers per second. So, many times the speed of sound. That dumps a lot of energy into both impacting bodies. Impacts in near-Earth mass bodies tend to vaporize a few to 10 percent of the body and melt the rest.”

A rotating object is explained easiest with the analogy of an ice skater moving their arms in or out to change the rate of spin, while conserving angular momentum.

Another example is an amusement park swing ride. As the rider is lifted into the air and accelerates, the rider spins at an angle, and they are pushed out at a larger radius than when the ride is stopped. If there was no chain to limit the angle, the rider would “expand” farther.

This is how a synestia works: its mass expands to its outer edges by moving slowly outward, creating the disk-like shape.

“These bodies were rotating faster than the corotational limit, so, even if you tried, you could not squish all of their mass and angular momentum into one body,” Lock said. “You have to have some part of the body in what’s called the disk-like region.”

After the object’s mass spreads out into this biconcave shape, it cannot be compacted into a “normal” planet’s shape until it slows or cools down.

“Eventually, what happens is you lose enough energy from the synestia that you fall below the corotational limit, and the whole thing can collapse down to a single body,” Lock said. “That process for the Earth itself takes around 100 years or so. It cools, in geological terms, reasonably fast, down to a more corotating object. Other objects may last longer than that.”

The formation of the Earth and the moon is highly debated because of its irregularity. According to Stewart, the moon is expected to be chemically different than the Earth based on physics models, but it’s not. Their isotopes, or “chemical fingerprints,” are basically identical, which is not clearly explained by any hypothesis thus far.

“[Lock and Stewart’s work] allows a lot more mixing between the material which will eventually make up the moon and the earth, and could explain why they’re so similar,” said Jay Melosh, an earth, atmospheric, and planetary sciences professor at Purdue University. “Ideally, and this is surely what Lock and Stewart hope, this will be regarded as the solution to the formation of the moon.”

Lock and Stewart’s work is built upon years of investigation and research from other sources as well as their own observations. Both stated the synestia resulted from a completely different perspective of looking at planet formation, one which has not been thought about before.

“These synestias are objects that are always moving,” Stewart said. “That’s different from the way we think about planetary objects. We don’t think about their mass changing, or in this case, losing this mass to what would then become moons. That was our eureka moment. It was almost three years ago.”

That “eureka moment” led Stewart and Lock to play around with calculations, working to find out what the structure was and why no one had seen it before. According to Lock, Stewart was looking at the data from her models and thought it didn’t look right alongside the canonical model. In hindsight, Lock said that the canonical model and preconceptions of what a post-impact planet is supposed to look like limited them, as well as other researchers.

“It was that moment, from changing our world view and having to reform our opinions and having to rethink all of the things we thought we knew, which was a really exciting thing,” Lock said. “Stewart likes to call it the eureka moment, and I like to agree.”

The current moon formation model dates back to the ‘70s and continues to be a highly-debated topic as technological advances are made.

“10 years ago, we thought we had [the moon’s formation] nailed,” Melosh said. “And then the geochemists got better at measuring isotopes and it turned out that the isotopic composition of elements on the moon is, essentially, identical to the earth, and that did not agree with most of the scenarios of impact that we could think of.”

Both Lock and Stewart have expressed their excitement about the discovery of a new object and the implications it has for hypotheses on the moon formation.

“I expect it will take some number of years to shake it all out and define the new normal,” Stewart said. “We’re hoping we’ve found the right path to the new textbook answer because we think the current textbook answer is not quite right. How long it takes until we call it a consensus answer is yet to be seen.”

Among Stewart’s future research plans are the evolution of the Earth’s surface and the magma ocean. Lock wants to take the synestia and learn if non-terrestrial planets, like a super-Earth or a Jupiter-sized planet, could form one in their lifetime.

“There are still things about our universe that we don’t understand,” Lock said. “There’s just infinite fascination in our universe. We’re in the 21st century, and still there are whole new concepts that have never been thought about. There’s an endless possibility to the things we can see in our universe and have yet to be discovered.”

Lock and Stewart’s next paper is currently in review and will cover their explanation of the moon’s formation using the research on the synestia.

More information about the synestia and moon formation can be found on Professor Stewart’s website and Simon Lock’s website.