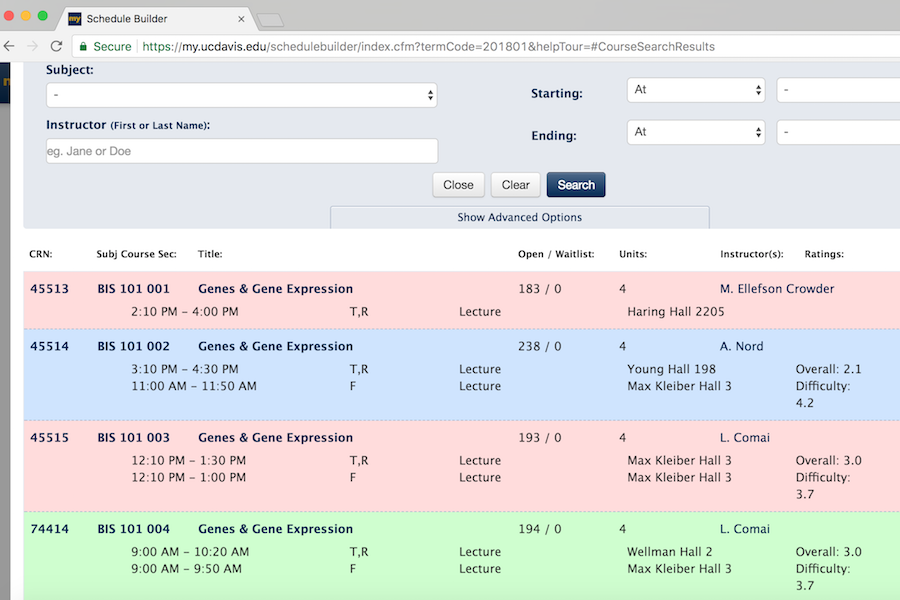 With the extension, when a student searches for courses on Schedule Builder, different colors will indicate whether a course conflicts with other classes in the student’s schedule, whether a class is full and whether the student has already selected that course. Additionally, the extension takes data from the website Rate My Professors and integrates it directly into Schedule Builder.

When asked how they got the idea to create the extension, Acevedo said that he was in his dorm room one day last spring when Chestakov came in saying, “Wouldn’t it be cool if there was this Chrome extension that would automatically tell you if [a] class is conflicting?”

According to Chestakov, he found the process of building a schedule tedious, specifically because he had to first save the course into his schedule and then see if it conflicted with other classes.

According to Chestakov, the hardest part of the process was learning new skills and technology as they went along.

“I think the extension is really helpful for making a schedule without having to go back and forth between the search and the current classes as well as going between Schedule Builder and Rate My Professors,” said second-year statistics major Jacob Fraysher.

According to Acevedo, the pair actually completed the project before Fall Quarter started, but they didn’t release the extension until just a few weeks ago because they wanted to release it near pass time. The whole project took them between two and three weeks.

Currently, Schedule Helper has reached almost 1,000 downloads. Students can download the extension for free at https://getschedulehelper.com

“I just wanted to create a tool that will save students time and make the process of picking classes a lot easier,” Chestakov said. “If it saves all the students that downloaded it one hour, I’ll be happy.”