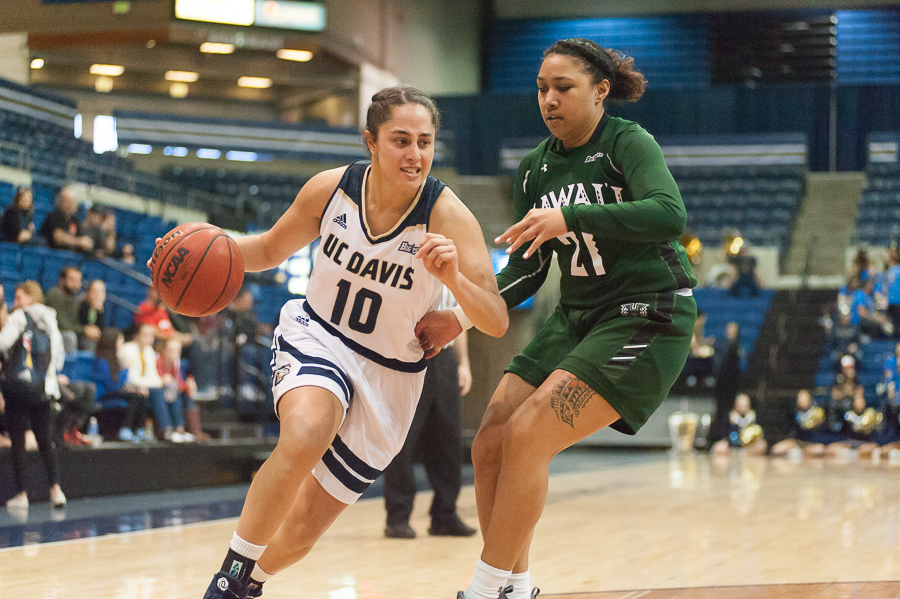 Bertsch, Anderson prove too much for Hawaii lineup

After beginning conference play with valuable a win against Irvine, the UC Davis women’s basketball team headed into its second conference game hoping to build off of the much-needed victory. With Hawai’i coming in having lost four of its last six games, the Aggies needed to take advantage of their opponent’s weaknesses as they fought to correct some of their own. The team responded well to the challenge, and the result was a 76-52 win that extended the Aggies’ conference record to 2-0.

While conference play is what matters most in terms of winning championships, losing three of the previous four games heading into the heart of the season was not the ideal way to wrap up the preseason. But according to junior forward Morgan Bertsch, it was up to the team to put the losses behind it and learn from every hiccup along the way keeping the end goal in mind.

“I think we’ve come to realize that conference is a whole different ballgame,” Bertsch said. “A lot of times during the preseason, people don’t know who you are. […] And when you come to conference, everyone knows who you are and everyone knows all your plays.”

“I thought we came out just a touch sluggish in the first half,” said head coach Jennifer Gross. “We talked at halftime about really needing to have great urgency and energy in the second half and I thought our team really responded.” 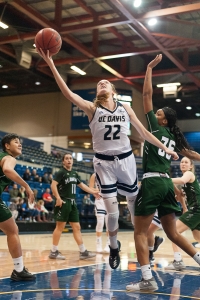 It was a balanced effort from the Aggie players, with valuable production coming from a variety of different places. Bertsch found her offensive groove early and kept on rolling, leading the Aggies with 26 points and six rebounds. It was Bertsch’s time on the court with redshirt senior center Marly Anderson that helped the Aggies break out in front of Hawai’i when the game was still close. Anderson finished the game with 13 points on a 6-6 from the field to go with nine rebounds and two blocks.

“We’ve been kind of trying to find more and more opportunities to use that combination,” Gross said. “With Hawai’i’s size, it worked for us today, and today it put the opponents in a tough spot, because we have two big scorers inside and we can kind of look for the right matchups, so we’d like to try to find more time for them to get to play together.”

Anderson echoed Gross’s analysis of the duo, acknowledging that it helps not only the team, but she and Bertsch as well and opens the floor up for each of them to play to their strengths.

“It makes it hard for the other team,” Anderson said. “They have to play two posts against us, and that’s not the usual lineup, so I think it messes up their lineup a little bit.”

It was not, however, a two-person game. Bertsch and Anderson got lots of help from their teammates, as the rest of the roster chipped in where they were needed. Senior forward Pele Gianotti and first year forward Cierra Hall each chipped in 10 points. The rest of the team added to the scoreboard at critical moments and kept the crowd in the game. Notably, a late game trey by junior guard Karley Eaton to give the team its 76th point sent the crowd into a frenzy as the promise of free pizza was announced over the speakers.

The Aggies will next take the court at UC Riverside at 7 p.m. on Thursday, Jan. 18.