On the Road with UC Davis Police 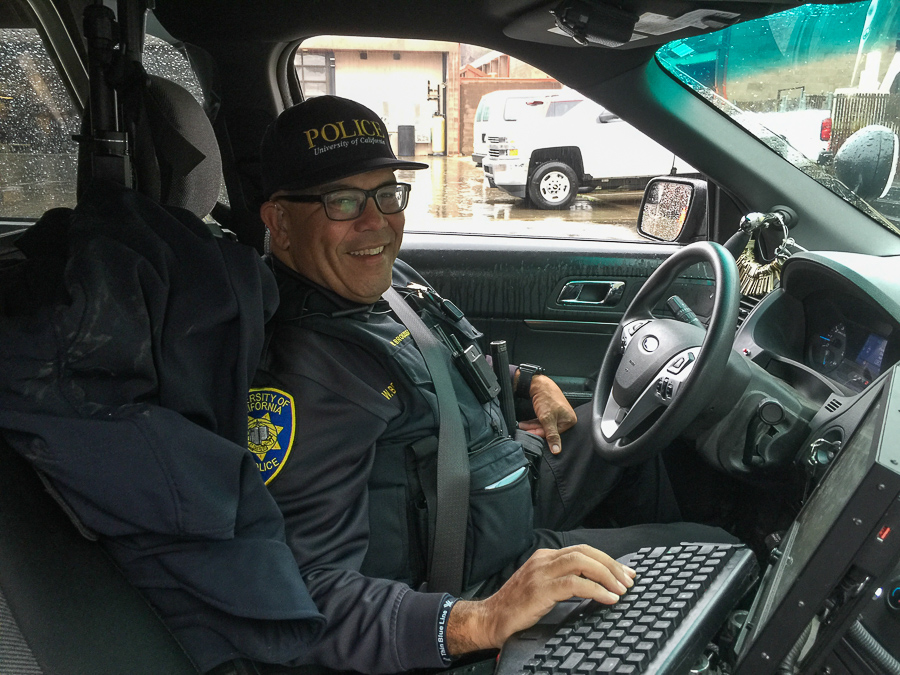 The goal of the Ride-Along program is to bring together students and officers. It allows students to learn about police work by talking with officers and observing police calls. A side benefit of the ride is visiting less-populated parts of the campus that a student might not usually see.

Captain Jennifer Garcia of the UC Davis Police Department expanded on the work done by the Ride-Along Program.

“We have always allowed ride-alongs,” Garcia said. “We promoted them more — probably about five or six years ago — […and] made it easier for people to schedule, because they can just go online and schedule ride-alongs. People from all over want to understand what police do, and it gives opportunity for people to come and talk to a police officer in a no-stress situation and get to know us a little bit personally.”

Broussard, a 20-year veteran of the UC Davis Police Department, shared stories of his time in the department and also took pride in showing the sprawling properties within the campus.

Broussard drove to the outer corners of UC Davis and stopped at the Russell Ranch Sustainable Agriculture Facility. He spoke enthusiastically about the property.

“They actually [conduct] research out here with the crops and on the other side where the tree line is [there] is a raptor protection area,” Broussard said. “There used to be a lot of farming out there. They used to have kiwis, pistachios, pomegranates; there was every known fruit out here known to mankind. And they tore it all out. There were 25-year-old kiwi plants out here. You can come out here and pick a kiwi and have a fresh kiwi for lunch. It is pretty neat.”

Kelsey McDonald, the student assistant to the Office of the Chief and a recent graduate of UC Davis, helps organize the ride-alongs.

“I do all of the scheduling for the ride-alongs,” McDonald said. “We have an online survey that people take […] and that is how you request a ride-along. I pick a date and time that I think will work best for our department and the person based on what they indicated on the survey, and I email them with the information.”

McDonald spoke about the uniqueness of the program.

“More than anything, I would say our officers are a super, super friendly police force,” McDonald said. “I love our ride-along program because our officers want to show [the] campus and not just answer questions. I know [when] I did my ride-along, we went out [to] the pastures, and baby sheep [had] just been born. I would have never known that — I did not know that we had sheep.”

During the ride-along, Officer Broussard later drove to the sheep facility on campus.

“Over here, they have the […] baby sheep,” Broussard said. “And these are the mommies with babies that can be out.”

Garcia spoke about the effectiveness of ride-alongs in building community and fostering  active police participation.

“It is good, because sometimes you make friends and you will maintain those friendships throughout the years,” Garcia said with regard to the Ride-Along program. “We tend to be more proactive instead of just reactive, so instead of just waiting for something to happen, we want to get out there in the community and know our community. We want to talk to the students.”