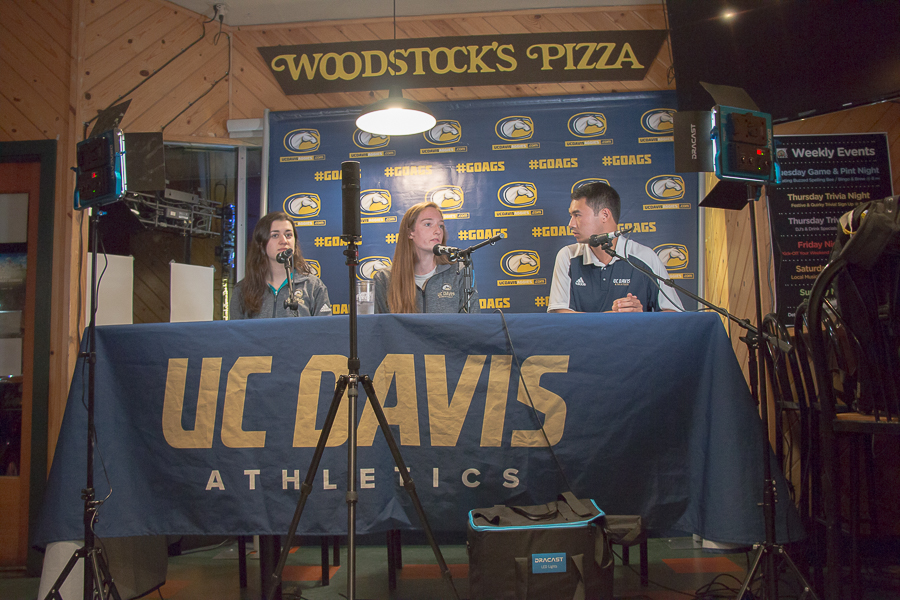 In its first installment of 2018, the UC Davis Coaches Show was hosted at the ever-popular downtown eatery Woodstock’s Pizza, where fans and members of the athletics community gathered last Tuesday evening to satisfy their cravings for pizza and for UC Davis sports.

This fun and insightful talk show is held regularly throughout each athletic season and features commentary from the university’s many student-athletes and coaches. This month’s show –– which was streamed live via the UC Davis Athletics Facebook page –– was broadcasted last Tuesday night amidst a jovial and familial atmosphere. Host Greg Wong sat down with members of the men’s basketball, women’s basketball and gymnastics teams.

Entering last Tuesday’s broadcast, the UC Davis men’s basketball team stood at 12-7 overall –– including 3-2 in conference –– and were fresh off an unsuccessful trip to the Hawai’ian islands where the team fell to the Hawai’i Rainbow Wahine 77-72. The first guest of the evening was Head Coach Jim Les, who expressed his thoughts about how his team is faring in his seventh season at the helm.

Les believes that there is “great parity” in the Big West Conference, with several teams suffering one or two losses and no single team dominating the competition. The Aggies share a two-loss conference record with three other Big West teams, which means that they are hitting a crucial point in their regular season schedule. With the potential to either pull ahead or fall flat in the standings, Les said that it was imperative for the team to keep “the integrity of our practices.”

“I feel like we haven’t scratched the surface in terms of our potential,” Les said during the show. “And that’s our goal, come late February and March, is to be playing our best basketball. I think this team, with their continued work ethic, is going to get there and be a force to be reckoned with.”

For now, the Aggies must work on battling through a tough pool of conference teams that are all out to play their best basketball against the defending conference champions. Les admitted that the Aggies are “getting everybody’s best shot,” which has translated into the team getting off to some slow starts in several games, especially on the road. If this UC Davis team wants to solidify a high seed going into the Big West tournament, it will have to learn to match the intensity of teams when playing away from the Pavilion.

Within the friendly confines of the Aggies’ home building, however, the Aggies have rarely stumbled. In fact, the team has rattled off 19 straight wins at the Pavilion, where the Aggies seem to play with a noticeably elevated level of aggressiveness. Even in games where the team has struggled, Les praised the fans for always bringing energy and enthusiasm that has given the Aggies the confidence to succeed. And speaking of Les’ players, junior guard TJ Shorts and junior forward AJ John joined the broadcast later in the evening and gave their opinions about the formidable win streak.

“It’s a different level of intensity,” Shorts said in the show. As the starting point guard who leads the team in assists and steals, Shorts also noted that the squad takes pride in defending the home court and making sure it gives each opposing team a “tough 40 minutes.”

“We don’t lose in those white jerseys,” John said. At his forward position, John plays key minutes for the Aggies off the bench and is second only to starting forward Chima Moneke in rebounds and blocks.

The home win streak certainly adds even more hype to this season of Aggie basketball. With a deep and talented roster committed to playing gritty defense and using its athleticism to its advantage, the Aggies are hoping that they end the season on par with their high expectations.

So far since the show, the Aggies have delivered. As mentioned earlier, the program’s home winning streak was stretched to 19 games when UC Davis ground out a victory against Cal State Northridge last Thursday night and then blew by Cal Poly on Saturday. With a 5-2 conference record, the Aggie men are now tied for second in the Big West.

The Aggie women, meanwhile, have a streak of their own. Head Coach Jennifer Gross’ team has not lost a single one of its seven conference games this season. The team has been on a tear, sporting a 17-3 overall record and averaging just under 74 points per game. Gross joined the broadcast and shared her observations on what has been a successful season to this point.

Even with all of the victories, Gross acknowledged that the scores of several of the conference games have been close down the stretch –– “dog fight[s],” as she called them in the broadcast. But with a team chock-full of veteran standouts, Gross retains a sense of calm knowing how poised and confident her squad is compared to most. And much like the men’s team, the women’s program is just as proud of its ability to defend.

“I’ve coached a lot of teams that get energy from [the] offense,” Gross said. “But this group has really bought into the defensive gameplan. We go into each game and we know, no matter what, we can always rely on our defense to get stops.”

Thanks to Gross’ system and defensive anchors like junior forward Morgan Bertsch, this Aggie team leads the conference in defensive field goal percentage and points allowed per game. Bertsch is the team leader in blocks and points per game, a dual-threat ballplayer who can get the job done on both sides of the floor. Bertsch, along with senior teammate Dani Nafekh, also made an appearance on the show.

“We’ve had such a culture at this program of family,” Bertsch said during the show. “This team as a whole has really accepted [that]. And that’s going to help us be really successful this year.”

Nafekh shared a similar feeling, expanding on the idea of family by highlighting how much “fun the team has together” and how that closeness off the court shows up in the form of being unselfish offensively. Nafekh, who is tied for the team lead in assists this season, certainly knows how to share the ball.

At the time of the broadcast, the men’s and women’s basketball teams were both set to compete on Saturday in a double-header game night at the Pavilion. Gross was reminded of the double-header games she used to participate in back in her playing days. One thing that has not changed since then: each UC Davis athletics team shows up to cheer each other on, like one big family.

Following last Tuesday’s show, the Aggie women took care of business at home last Wednesday night against Cal State Fullerton, and again on Saturday against a tough UC Santa Barbara outfit. These two additional wins have extended the Aggies’ undefeated streak to seven conference wins on the year, placing them in first place atop the Big West standings.

The final two guests of the broadcast belonged to the UC Davis gymnastics team: Head Coach John Lavallee and senior gymnast Amanda Presswood. Aggie gymnastics is coming off a pair of impressive performances in the team’s first meets of the season. In the Norcal Classic at Stanford on Jan. 8, the Aggies amassed a program record highest point total in a season-opening meet with a score of 194.400. The team followed up the historic start with a dual meet victory over Seattle Pacific University just four days later.

“We knew going into this season that we had a really talented team,” Lavallee explained during the show. “They showed up at Stanford, especially when you consider the fact that over half the spots in the lineup were freshman. That was really an amazing performance for them in their first meet.”

The youth of this team is indeed extraordinary; out of 18 roster spots, seven are true freshman and another three are redshirt freshman. On a team with so much inexperience at the college level, Lavallee praised his team’s senior leaders, like Presswood, who have helped the new faces acclimate to the team. Presswood explained that before graduating from high school, gymnast primarily compete individually. Once those athletes make it to a college program they often have to get used to the team environment.

“My very first college meet, I was first up on floor,” Presswood recalled during the program. “I fell […] I was so nervous. But after that I learned from it in the gym and feel what it felt like to be in a college meet and I’ve been fine ever since.”

Since that first meet, Presswood has shone as one of the best competitors on the squad. She is one of the best in the league in the floor routine and has been named an All-Mountain Pacific Sports Federation athlete twice, including first team honors in 2016.

As for Lavallee, he has been the head coach of the UC Davis gymnastics program for 12 seasons and is a six-time MPSF coach of the year honoree. Originally from the East Coast, Lavallee akins his journey to finding a coaching job at UC Davis to winning the lottery.

“I don’t have a job,” Lavallee chuckled to the host.

He considers his work as a coach something he is very lucky to do, especially when he has the opportunity to coach athletes who excel in all parts of life.

Looking ahead this season, the Aggie gymnastics team will host its next three meets in the Pavilion. The first of these was a meet against West Virginia and the University of Illinois at Chicago on Friday, where the special assistant coach for that evening was UC Davis football Head Coach Dan Hawkins. UC Davis placed second in the meet behind West Virginia and ahead of UIC with an overall score of 194.200.

Looking ahead, the Aggies will have home meets on each of the next two Fridays, including a meet tomorrow night against San Jose State and Seattle Pacific starting at 7 p.m. Lavallee, Presswood and the entire team encourage everyone to come out to any one of the competitions to take part in the fun and positive atmosphere.