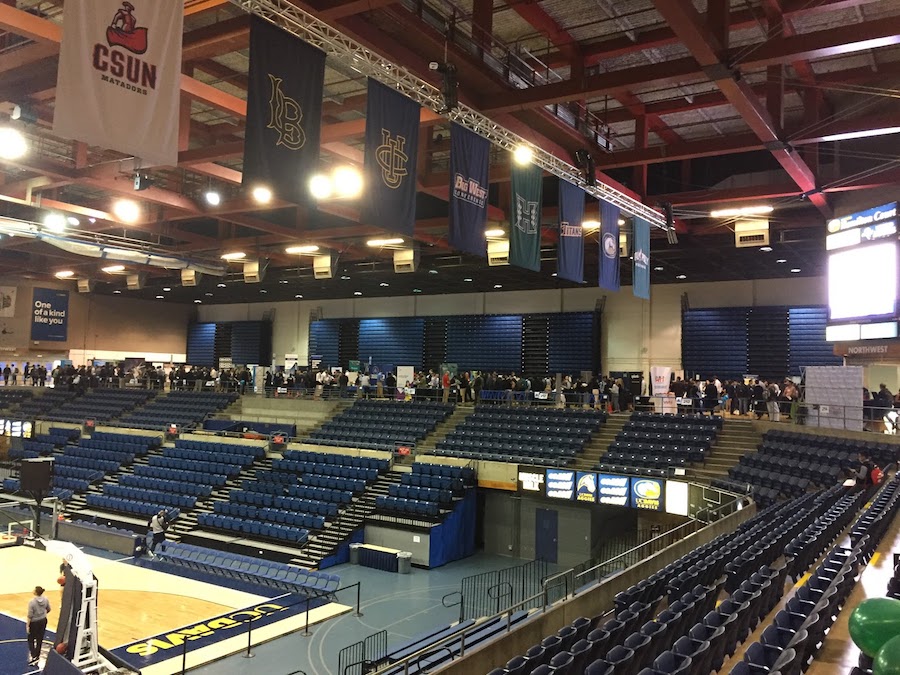 Aggies connected with potential employers including US Department of Veterans Affairs, CA Resource Board, Amazon

On Jan. 24, 144 companies attended this year’s Engineering and Physical Sciences Internship and Career fair at the UC Davis ARC Pavilion.

The Internship and Career Center hosted the event. Marci Holland, the executive director of the ICC, was excited to see Aggies making connections.

“I hope students gain confidence in their ability to speak with employers about the great assets that they have to offer,” Holland said. “And I hope that they make connections that result in internships and jobs.”

Noted on name tags was that some employers were UC Davis alumni or transfer student alumni who graduated as recently as 2016 and others from 2009 or prior. Many of the recruiters said that they obtained their jobs by speaking to company representatives at a career fairs years ago. Holland hoped the name tags would help students’ build their confidence.

“Knowing that the recruiter they are talking to is a UC Davis graduate [or] was a transfer student, gives them common ground which can open the door to more comfortable conversation,” Holland said. “It also helps transfer students see that they are not ‘behind’ and have great career prospects.”

The ICC hosts four career fairs each academic year, with the Engineering and Physical Sciences Internship and Career fair being the only career-specific event. Organizations from previous years returned, such as Advanced Semiconductors Materials Lithography, the California Energy Commission and ACCO Engineered Systems, Inc.

“I’m mostly looking for semiconductor jobs,” said Diana Mikhail, a third-year chemical engineering undergraduate. “I talked to ASML at the fall career fair.  It was cool to see them here again.”

Mikhail is hoping to find an internship before entering her fourth year at UC Davis.

The ICC introduced other companies to the career fair for the first time, including VVH Consulting Engineers and Condon-Johnson & Associates. The President of CJ & Associates, James Johnson, said he was excited to attend the fair and meet “the next generation of designers and builders.”

CJ & Associates is a specialty contractor focusing on geotechnical projects.

The company met a large number of candidates for both internships and full-time positions. Some companies were seeking to hire interns for their social media department.

While the Engineering and Physical Sciences Internship and Career Fair is tailored toward students in STEM, “it doesn’t mean that they are only hiring engineers,” Holland said. “They have accounting, human resources, sales departments to name a few. Firms are hiring for many tasks associated with business operations.”

For the first time, the career fair was located on the second tier of the ARC Pavilion instead of the ground floor where the basketball court is normally set.

“It has some definite benefits, though some parts are quite difficult to maneuver,”  Holland said. “We’re trying to get rid of the choke points.”

Staff at the ICC will be examining the advantages and drawbacks of the setup to analyze whether it will be an optimal configuration for the future.

The career fair is an opportunity for both undergraduate and graduate students to make connections. Arman Asrani, a master’s student in computer science who received his undergraduate degree in Mumbai, attended the event.

“The career fair seems less crowded than last year,” Arsani said. “I like the fact that it’s upstairs.”

Amazon was at the top of Arsani’s list. Arsani was one of the many students who stood in line to speak with representatives from Amazon at the fair.

Not only was Amazon the largest company at the career fair, but it also had the longest line — with about 30 minute wait times. But not all lines were this long. Some ranged for a few minutes while others were closer to 15.

In addition to bringing quarterly career fairs to campus, the ICC hosts information sessions and on-campus interviews, bringing work opportunities directly to students. Located in South Hall, the ICC provides career counseling, mock interviews and workshops for students interested in gaining early work experience in their respective field. About 80 percent of undergraduates participate in internships during their time at UC Davis. The ICC has aided this feat by facilitating over 10,000 internship opportunities each year.

The last two Internship and Career fairs for this academic year will be on Wednesday, Feb. 28 and Wednesday, April 18 from 10 a.m. until 2 p.m. at the ARC Pavilion. Over 150 companies are estimated to attend the upcoming general career fair in February.