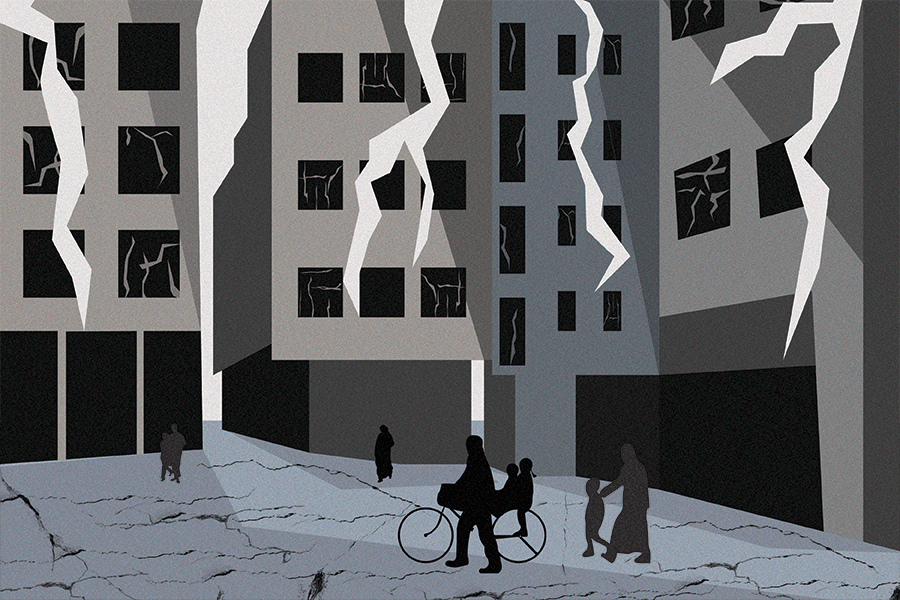 In 2011, Syrian protesters responding to the reverberations of the Arab Spring called for the overthrow of their government. President Bashar-al Assad ordered the military to violently silence opposition, giving way to a civil war that rages on today. At the end of February continuing into March, over 1,000 civilians died in Eastern Ghouta, a suburb of Damascus where rebel forces persist.

“Imagine if Trump had actually called the military to start shooting at people,” Radwan said. “When the military shoots at civilians of the same country, then this is the result that we have. It’s really atrocious.”

The seeming absurdity of this comparison is instructive as it informs the current violent crisis in Syria. It also allows Americans to relate to the political climate in Syria, which is often ignored. Radwan also spoke to this dissonance.

A challenge is thus presented to attract U.S. attention in the midst of a long, complicated and seemingly “alien” conflict. The crisis in Eastern Ghouta consists of consistent shelling by Syrian government and Russian forces. The area has been so aggressively bombarded because it is one of the remaining rebel-held enclaves. The Syrian government attacked Ghouta in 2013 with sarin gas.

Who is fighting this war? What are they fighting for? With these questions and more context in mind, are human rights or humanitarian laws being violated and if so, will the perpetrators ever see the inside of a filled courtroom? Martin Luther King Jr. Professor of Law William S. Dodge, who specializes in international law and court conflicts, spoke to the issue and its context.

“It’s a very complicated conflict because it has many more than two sides,” Dodge said. “The U.S. interests have been partly humanitarian, but primarily anti-terrorism. The Turkish involvement seems to be, worry about the conflict spilling over to Turkey but also anti-Kurd. Russia is mostly motivated, is partly motivated by the fact that Syria allows it access to naval facilities on the Mediterranean, but also by the desire to throw its weight around and be a player, particularly in opposition to the United States. And Iran would like to see, would like to increase its influence through the sort of Northern Middle East…and also make life difficult for the United States. And Hezbollah, which is an Iranian group, has been supporting the Assad regime.”

It seems unlikely, but ultimately impossible to guess at whether or not any party involved in the Syrian Civil War will be tried by an International Criminal Court. This court, assembled by an international treaty called the Rome Statute which was informed by the Geneva Conventions, tries criminals for serious crimes relevant to the international community.

“There are two principles that are commonly referred to [in international humanitarian law],” Dodge said. “The principle of distinction is that you have to distinguish between combatants and non-combatants. The principle of proportionality says that you have to use means that are proportional to the objective trying to be achieved. Violating those principles is a war crime and then you get into what are the possible remedies. And there’s the possibility of international mechanisms, like the International Criminal Court.”

Since Syria is not a member of the Rome Statute, the case would have to be referred by a member of the United Nations Security Council. Dodge doesn’t think it likely that the particular five members — France, Britain, the United States, Russia and China — would make this referral. Another option could be a domestic case, brought under civil, criminal or domestic law. A final and further extraneous solution would fall under the alien tort statute.

“The alien tort statute is a very old statute, it’s part of the first judiciary act of 1799 that set up the U.S. federal courts,” Dodge said. “Starting in 1980 in the case […] called Filartiga vs. Pena-Irala out of Paraguay […] The police inspector came to the United States so he was subject to personal jurisdiction here, so he was sued here, and the second circuit court of appeals held that the U.S. court had jurisdiction because torture is a tort and it’s in violation of customary law. And the plaintiffs were aliens, so it met the three requirements of the statute. And from then on human rights cases were brought in U.S. court.”

However, cases have been more and more difficult to bring under the alien tort statute. In this case, an American would have to be gravely injured or killed in order for them or their family to bring a case against a Syrian force in a U.S. court.

Human rights and grave human loss foreground the legal discourse around humanitarian law. The principles of proportionality and distinction could be interpreted as violated while the loss of life is certainly enormous. Charles Walker, a Latin American history professor, Macarthur Foundation Endowed Chair in International Human Rights and Director of the Hemispheric Institute of the Americas, impresses upon the importance of visibility for the loss of life.

“The regime has shown its absolute willingness to kill thousands of its own people to defeat the rebels,” Walker said. “I think what we need to do is adamantly stop the bombing of civilians.”

The question of U.S. intervention in a moment of such extreme crisis is a highly debated one. Dodge considers it through the eyes of the law.

“There are a number of people who make the claim that humanitarian intervention is an emerging norm of U.S., or of the international system,” Dodge said. “But at this point it’s a highly disputed point of international law.”

Interventionism is thus a questionable legal defense. For Professor Walker, a decision must be reached to protect civilians, one which does not necessarily include U.S. military intervention. He nods to the defense of state sovereignty.

“The regime would say, ‘this is Syria’s war, don’t get involved,’” Walker said. “That sounds just, but on the other hand if they are mustard gassing their people […] when do other groups get involved?”

Radwan believes that states must be allowed the opportunity for their own conflicts and is wary of the presence of the American military as conflict resolution.

“I actually have never been supportive of U.S. military intervention in any conflict in the Arab world,” Radwan said. “It is usually done for the wrong purposes, badly executed, and backfires. What the United States could possibly do is a political intervention, a strong stand against the Russian military intervention in Syria. We have to give every country its due sovereignty. But I am all for international organizations, the non-governmental communities.”

According to Radwan, much overlooked is the presence of foreign powers in the conflict. The discourse in the U.S., as pertaining to international law, has been staunchly anti-terrorist from Dodge’s perspective. This same point of view cannot comprehend the evolution of an Islamic government, which Radwan acknowledges as legitimate if requested by the people. According to Radwan, the U.S., which has funded some rebel factions, may not have the understanding or tools to productively approach the Syrian conflict, which rages on despite calls for ceasefire.

Editor’s note: A previous version of this article was published with the incorrect headline “Thousands benefit from user generated updates”. The correct headline is “Eastern Ghouta feels drastic civilian losses”. The article has been updated to reflect this change.