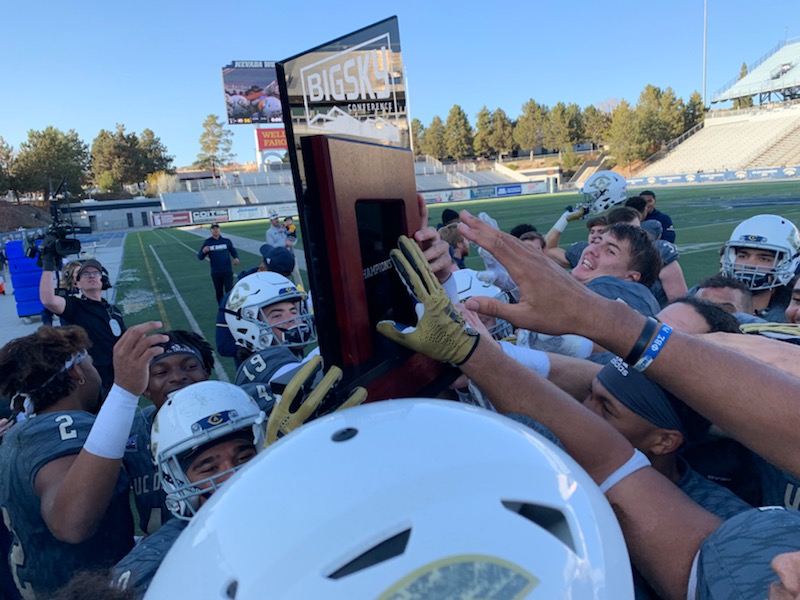 The UC Davis football team captured its first ever Big Sky conference title with a 56-13 victory over rival Sacramento State on Saturday afternoon’s 65th annual Causeway Classic. Then, on Sunday morning, the FCS Selection Committee announced that the Aggies were given the No. 6 seed in the upcoming FCS playoffs and a first-round bye.

UC Davis will host a second-round game at Aggie Stadium on Saturday Dec. 1 at 4 p.m., facing either Northern Iowa or Lamar.

“We are ready to go and it’s been a long time coming,” said senior wide receiver Keelan Doss. “These opportunities don’t come around too often so we’re ready to take advantage of that.”

Due to the unsafe air quality from the Camp Fire in Butte County, this year’s edition of the Causeway Classic was relocated to the Mackay Stadium at the University of Nevada, Reno campus. At the time of kickoff, the air quality index (AQI) back in Davis was at an unhealthy level of 206.

Despite the last-minute change of plans, almost 2,500 fans made the 150-mile trek up north and collectively raised $5,407 for the victims of the Camp Fire.

Overall, it was a glorious afternoon for the Aggies who truly overpowered their rivals in every possible manner. The team’s offensive superstars, Doss and junior quarterback Jake Maier, set new personal records, while the defense allowed its fewest number of yards in any game this season. The special teams unit also did its part, executing a fake punt that resulted in more points for the offense.

UC Davis jumped out to a 35-10 halftime lead and got the celebration started early as Head Coach Dan Hawkins received the honorary ice bath on the sideline as the final seconds ticked off the clock.

“I haven’t had one in a while, so it felt good,” Hawkins said.

The second-year head coach was quite emotional after the game as he reflected on the significance of this victory for the program. After seven years of playing in the Big Sky, the Aggies finally have a share of the conference title.

“It’s just all the sacrifice, all these guys have been through and everything that everybody puts into it,” Hawkins said. “To see them sacrifice and buy in and have a transcendent experience, this is what an Aggie is.”

Saturday’s victory was the pinnacle of a remarkable turnaround that Hawkins has led since the day he returned to his alma mater in late November of 2016.

“I don’t think you put a lid or timetable on it,” Hawkins said. “You get in here, work hard and try to get guys to buy into this vision of excellence with class and raising their standards. We’ve had so many guys sacrifice and do things above and beyond for our program. That’s why it happens.”

In the midst of celebration, Maier conceded his never-ending quest to play a flawless game and keep improving every week, something that he has referenced after every victory this season.

“Still to this day, we feel like we haven’t actually played a complete, perfect game of football and that’s always been our standard,” Maier said. “If I know this team well enough, these next few weeks of preparation coming into the playoffs are going to be the hardest this team has ever worked.”

Maier set a career-high with 478 passing yards on the afternoon and also scored two rushing touchdowns, which matches his career high.

Doss, last year’s Walter Payton Award finalist and the owner of the all-time records for catches and receiving yards in program history, expressed his satisfaction for staying at UC Davis for his senior season, instead of declaring for the NFL draft last winter.

“This definitely elevated my decision to come back,” Doss said. “I’m happy, and I can’t even put it into words right now.”

Hawkins agreed that Doss “started the whole thing when he stayed” and credited “his love for the University and football program, and finishing something he started.”

UC Davis received the opening kickoff and swiftly started the scoring after just four plays. Sophomore wide receiver Jared Harrell, running a deep post route over the middle, caught the ball in stride and streaked all the way down the sideline for a career-long 77-yard touchdown.

On the next Aggie drive, redshirt freshman running back Ulonzo Gilliam juked a couple defenders and carried the ball 34 yards into enemy territory. After a play-action fake and 19-yard completion to junior tight end Wesley Preece, Maier dashed into the endzone for a one-yard touchdown to make it 14-0.

Sacramento State started to find a rhythm on offense on its third possession, with two long completions through the air and a run of 11 yards. Nonetheless, the UC Davis defense held strong, with junior defensive lineman Jordan Franklin batting down a pass at the line of scrimmage on a key third down play.

After a lengthy drive of over four minutes, the Hornets settled for a 34-yard field goal to cut their deficit to 11 points.

On the next drive, Gilliam continued to exhibit his shiftiness in open space, slipping multiple tackles en route to a 23-yard run. Faced with a fourth-and-four play from the Hornet 44-yard line, the Aggies ran a fake punt with senior running back Ethan Hicks, the upback, taking the direct snap and sprinting 25 yards up the middle for the first down. Two plays later, Maier maneuvered around the pocket and decided to tuck the ball and scamper nine yards for the touchdown.

After a punt by Sacramento State, the UC Davis offense picked up right where it left off on the previous possession. The drive began with three straight pass completions, including two in the direction of Doss, to bring Maier’s completion streak to 13 straight throws to begin the game. Then, Doss came down with a spectacular 23-yard reception, turning his hips in the middle of the air and high-pointing the ball. Three plays later, Hicks cruised into the endzone from three yards out to push the lead to 28-3 with under ten minutes left in the half.

Sacramento State quickly answered with back-to-back completions of 34 and 14 yards to get into the red zone, before scoring on an 18-yard pass play.

The Aggies executed a two-minute drill at the end of the first half, on the strength of a 23-yard run by Gilliam and a tremendous effort by Doss, to stretch forward for a first down. With 10 seconds left, Doss took a short screen 13 yards to the house, extending the lead to 35-10.

The Hornets began the third quarter with a tedious 17-play drive of over seven minutes, but came away with just three points.

Toward the end of the quarter, the Aggie offense got rolling again with three completions to Doss, including a five-yard touchdown on a short crossing route over the middle.

It was the same story in the fourth quarter, as Doss hauled in a 43-yard fade and then made a tremendous running catch toward the sideline with a defender draped over him. Those plays set up a jump-ball catch by junior tight end Wesley Preece in the endzone to push the score to 49-13.

On the last UC Davis possession, Doss set a new personal record with his 16th catch of the afternoon. He fell just three yards shy of breaking his single-game record for receiving yards. A late four-yard run by senior running back Namane Modise capped the score at 56-13.

With two weeks to prepare for the FCS playoff battle, Hawkins expressed some satisfaction with the fact that the Aggies will be able to “get some wind underneath the sails” during the Thanksgiving bye week. Not one to look too far ahead, Hawkins did note that, if the Aggies do take care of business on Dec. 1, the looming possibility of a rematch against Big Sky rivals Eastern Washington in the following round is “interesting.”