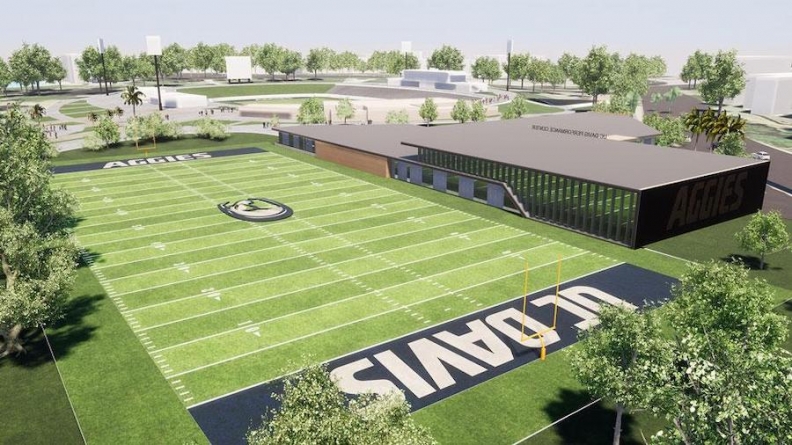 On Nov. 15, UC Davis announced its plans to continue campus and student resource expansion by teaming up with UC Davis Health to begin construction on a new student-athlete performance center. The new center will provide more spaces and services for the university’s intercollegiate athletics teams as well as other sports-related programs on campus.

On the day of the announcement, UC Davis Director of Athletics Kevin Blue discussed the program’s feelings toward UC Davis Health and the new project in a press conference.

“UC Davis Health is the top ranked health system in our region and is an extraordinary partner for our athletic programs in many ways. The health care provided to our student-athletes is world class,” Blue said. “We’re excited at UC Davis Athletics about this advanced partnership and thankful for the support of UC Davis Health.”

Estimated to be about 38,000 square feet, the new building will make its home right next to Aggie Stadium, on the corner of Hutchinson Drive and La Rue Road. An additional 16,000 square feet will go toward a renovation of the Bob Foster Team Center to the north of the stadium and a new practice field situated close by.

The new building and practice facility will be built upon what is now used as the designated tailgate area before UC Davis football games. For the time being, “several new options” for future tailgating are currently “being evaluated,” according to the university.

It was also announced that, going along with the athletics programs’ partnership with UC Davis Health, Aggie Stadium will be renamed “UC Davis Health Stadium” on Aug. 1. The name will stick for a set period of 20 years. Within the new performance center, UC Davis Health will also become the student athletes’ “exclusive provider of healthcare services.”

Around 90 percent of the funds for the $40 million project came from several sizeable donations from members of the UC Davis community and its alumni network, with the largest coming from Bruce and Diane Edwards.

Kevin Blue gave shoutouts to several specific donors, including the Edwards, and mentioned the gratitude the two programs felt toward the generous gifts.

“We’re deeply grateful for the contribution to this project by UC Davis Health and very importantly from our generous donors [… for] making this project a reality,” Blue said.

Dr. David Lubarsky, who was appointed vice chancellor of human health sciences and chief executive officer at UC Davis Health in May 2018 by Chancellor Gary May, commented on his excitement for the project and what it means to UC Davis Health.

“It is a great thing to be apart of something this exciting so early in my tenure. I’ve only been here a few months, [but] naming the stadium is just a small example […] of UC Davis Health’s commitment to serve this community,” Dr. Lubarsky said. “Every single person on this campus, and, really, every single person in Davis is a part of our family […] I think it’s really critically important that the health system do its best to serve all the people who want to access the best physicians around.”

The project is set to break ground in the early months of 2019.