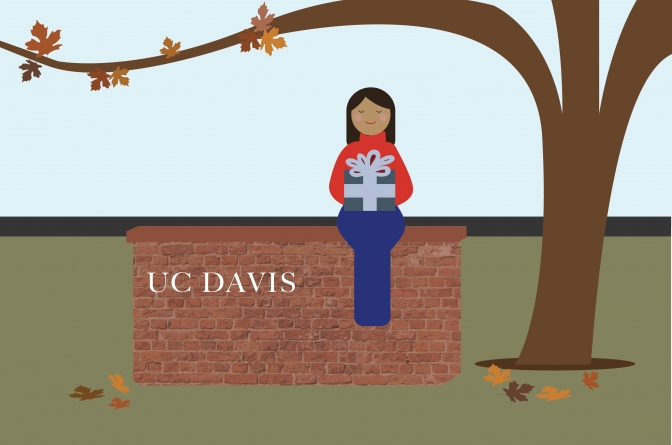 The end of the year is here, which means it’s time for school break and the holidays. While it is common for students to go back to their hometowns during this time, some end up celebrating the holiday season in Davis.

The most recent holiday was Thanksgiving, and due to the unforeseen campus closure, some students were not able to plan their trip home accordingly.

Second-year sociology major Catherine Amaya wanted to go back home to the San Fernando Valley for Thanksgiving break but ended up staying in Davis.

“The campus closing really messed up my schedule and confused me,” Amaya said. “I had to call and try to have them rearrange my flight plans but they couldn’t do it for me. In the end, it got so messed up that I decided to just stay in Davis for Thanksgiving.”

Amaya was disappointed that she couldn’t go home, but ended up using her time to catch up on studies and watch Christmas movies.

“It ended up being relaxing,” Amaya said. “I watched Christmas movies and ate mac and cheese, so it was pretty chill.”

“I stayed in Davis because I didn’t really have the funds to go home,” Garcia said. “Also, I live in Los Angeles, so it’s a really long drive to go and come back.”

Living with three roommates, Garcia stayed in Davis by himself since they left the day of Thanksgiving.

“I stayed here by myself,” Garcia said. “But we have a cat so I spent it with him.”

Rayven Hernandez, a third-year wildlife, fish and conservation biology major spent her Thanksgiving exercising and walking around the Arboretum.

“I didn’t go home because my family ended up going to a relative’s house that lived farther away than I’d be able to go,” Hernandez said. “I also had to work the whole week so it was easier just to stay.”

She said that she enjoyed runs around the arboretum more because it was so empty.

“It was a little eerie but I still enjoyed it,” Hernandez said.

As the quarter comes to an end, winter break will hopefully provide a longer and more adjustable period of time for students to go home and reunite with their friends and family. Garcia recommended that any student who stay home for the holidays reach out to friends who are also staying in Davis.

“There are definitely people who stay,” Garcia said.