The Grinch in Culture 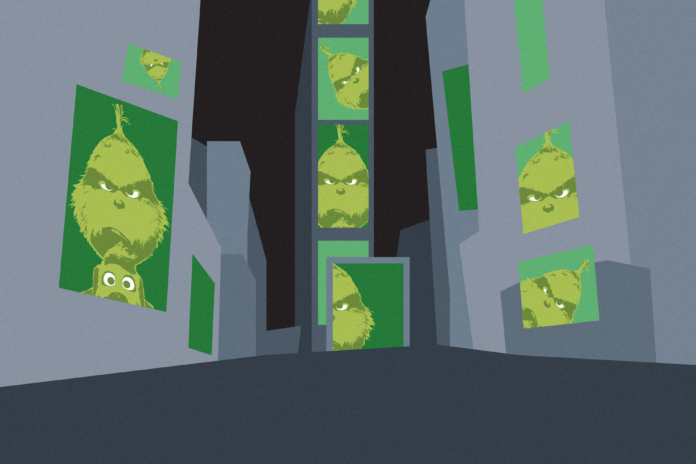 Saying goodbye to minions, welcoming in the Grinch

When “The Grinch” was released on Nov. 9, there was a lot of buzz surrounding it. Some of the buzz was due to the soundtrack that ranged in sounds, featuring rap artists like Tyler, the Creator and Run-DMC, while still containing other more “grinch-typical” Christmas songs from the Supremes and Nat King Cole. It’s often a comical combination when childhood remakes synthesize with more contemporary and relevant artists or pop culture symbols, such as the unique and radical sound of Tyler, the Creator as he raps about such a common and popular Christmas figure. For many college students, this juxtaposition is almost intriguing in its opposition, and because of that, an interest has intentionally been sparked in The Grinch.

While many would argue that the Grinch never left as a cultural celebrity and name in American culture, the publicity and advertisement for this new film was  promotionally similar to the way the minions from Illumination’s “Despicable Me” franchise took off as a cultural phenomenon.

For a film that has devoted $80 million to various promotion campaigns, the most recent Grinch movie has surpassed all other promotions for previous versions of the movie. In an article by Deadline titled “‘The Grinch’ Global Promo Campaign Grows Several Sizes from First Movie to $80M,” the various portrayals of the Grinch in advertisements are compared and expanded on in regards to past portrayals.

While IHOP focuses on Grinch-green colored pancakes and hot chocolate, Bloomingdale’s windows feature Grinch-themed decoration and decor, while Puffs has created holiday boxes that center around the Grinch and other Whoville characters.

How this promotional campaign differs is through its choice to appeal to a wider ranging audience, which can be seen in its soundtrack but also in its ad campaigns and partnerships with the NBA. In Ringer’s article, “The Story Behind ‘The Grinch’ and the Weirdest Marketing Campaign of the Year,” Illumination’s partnership with the Grinch is explored in great detail, questioning why a movie that is classically focused and geared towards a younger audience is attempting to attract a different age, specifically the age group of 18-34 year olds that most frequently watch NBA programming. In addition, the article explores various realms of social media that have been created as advertisement techniques to mimic the voice of the Grinch in a comical and mature (yet still appropriate) manner, as the Grinch tweeted on the turnout of a sports game.

The article ended reflecting on the current state of advertising and consumerism saying, “In an era of unceasing appetites and fleeting attention spans, perhaps a movie’s best bet is to throw everything at the wall and see what sticks, even if it happens to be at J.R. Smith’s expense.”

In addition, many of the Grinch billboards were specific to the cities they were placed in, with slogans that said “I could watch you crawl through traffic all day” and “Rent is so cheap here” along an all green billboard with the Grinch on it. These snarky billboards add to the comical persona that Universal and Illuminations helped craft of a 2018 Grinch that would say things such as “I put gluten in your smoothie” and other slogans that helped evoke the comical negativity of the Grinch.

While this push in advertising can be attributed to its goal of getting more people to go see “The Grinch” in theatres, it has kicked off a more cultural trend of Grinch costumes, funny Youtube makeup videos, and catchy music (including Tyler, the Creator’s album titled “Music Inspired by Illumination & Dr. Seuss’ The Grinch”). As the modern day Grinch has attempted to rebrand in matters that echoe the comical interests of millenials and young adults in advertising attempts, he still remains accessible for children to enjoy.

Many children’s films that have gained attention recently have been similar in that they are continuing the legacy of movies that ages 18-34 remembered as kids. Movies such as “Monsters University,” “Incredibles 2,” and the highly anticipated “Toy Story 4” have gained attention from and attracted an older audience because of the resonance and attachment that many had to these films as adults.

Although the Grinch is a character that everybody grew up with, this attention to advertising and creating a franchise among older people seemed to be echoing and attempting to invoke the same emotions that these other continuations and remakes have gained without holding the exact same level of endearment in terms of cultural importance. Partially, this disconnect seems to be in the difference between the Grinch as a character that has been created, and these other films as entire stories and worlds that were adored.

Nevertheless, this influx in promotion and advertisement has been exciting this holiday season as the snarky, negative Grinch has taken over and appealed to all ages, urging them to buy in (pun intended) to the new accessible version of the Grinch.