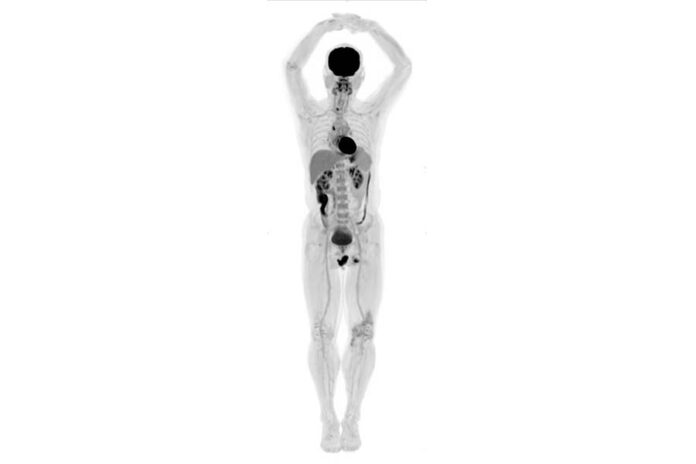 Researchers at UC Davis have developed an improved PET scanner, a machine that produces images that doctors use to treat cancer and heart disease. The machine produced its first images last month.

“We were blown away, we were so stunned by how good the images were. It was everything we hoped for,” said Simon Cherry one of the lead researchers on the project.

Positron Emission Tomography scanners are widely used in hospitals across the world and are a crucial clinical and research tool. To conduct a PET scan, doctors inject glucose molecules tagged with radioactive elements into a patient. The PET scanner tracks the tagged molecules with radioactive sensors to create an image. In addition to creating an image of the human body, the PET scan provides information about how different components of the body are functioning.

Dark areas on PET images indicate a part of the body that is using more glucose. This ability to provide metabolic information is what makes the PET scan unique. A CT scan, another popular imaging technology, can create a three-dimensional picture of the human body. While a CT scan could identify a tumor, a PET scan could show that tumor rapidly consuming glucose, indicating that the tumor is growing or aggressive.

Despite the technology’s strengths, current machines have limitations that scientists at UC Davis wanted to address. Current scanners are only about 20 centimeters wide and can only scan a small portion of the human body. It is possible to scan the full body but doctors have to carefully push the patient through the scanner. In addition, current PET scanners only capture a small percentage of the signal available. A PET scanner that could cover the entire body at once is the obvious solution to these problems.

According to UC Davis researchers, the full body PET scan could have been built many years ago.

“The first time this was proposed was a really long time ago, our friend and colleague Terry Jones proposed this in 1990,” said Ramsey Badawi, a researcher at UC Davis, “The technology was certainly there in 2004.”

Many scientists and businesses were not convinced, however, that the full body PET scan was worth the money. For 10 years the UC Davis team searched for funding, then in 2015 they received a grant from the National Institutes of Health to begin work on the project. After working through some of the details of the device they wanted to build, they found an industry partner called United Imaging, a Chinese company, that was willing to take a risk on the product. According to Simon Cherry, it took a public institution to champion the product because it was too big a risk for a private company to take.

“Industry was not going to do this themselves because this was such a bold leap, and it’s not clear at this point what the market is and whether the cost-benefit ratio is sufficiently good that people would actually buy these,” Cherry said. “We were able to de-risk the project for the company by bringing a lot of ‘know how’ and some money to the project.”

Once the funding was secured, the team began to work on the technical difficulties of scaling up the PET scan to cover the whole body. The researchers were expecting problems with heat generation and data processing, but several concurring technological advancements in other fields made those problems much less difficult. After only a few years of development, the finished scanner, called EXPLORER, was revealed at the Radiological Society of North America conference in November.

The EXPLORER can produce images with up to 40 times more detail because of the increased number of sensors covering the whole body. Doctors can also use much less radiation when injecting tagged molecules because the machine can capture more signal. Perhaps the most novel part of the machine is that it can produce 3D videos of the tagged molecules moving throughout the whole body, which could have major research implications.

The machine could help drug companies understand how a drug reaches the important parts of the body, how a drug might end up in the wrong place and cause side effects and how long a drug stays in the body. It could also be used for research on disease that affects the whole body, such as cancer and tuberculosis or autoimmune disorders.

“I’m really fascinated to see what’s going [on] with different parts of the body simultaneously; I think that is one of the major things that sets this technology apart from anything else,” said Eric Berg a post-doctoral researcher who is working on the project.

The next step for the research team is to demonstrate the machine’s effectiveness and benefits.

“The system is built, it produces stunning images, everyone is excited, but now we actually have to quantify the benefit. We have to show that we can somehow help patients and help the healthcare system.” Cherry said.