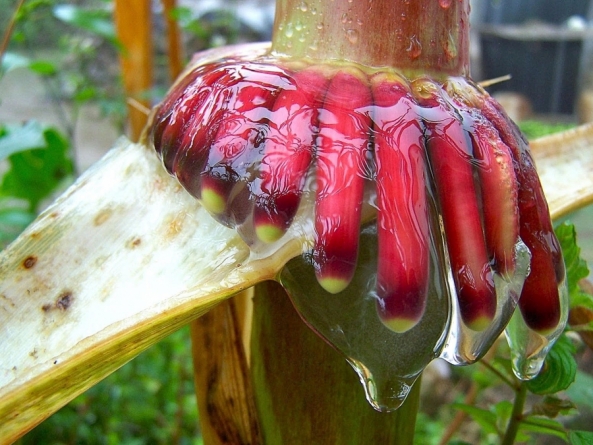 Indigenous corn in the Sierra Mixe can fix atmospheric nitrogen, diminishing the need for fertilizer

Similar to many areas where commercial corn is grown, the mountainous region of the Sierra Mixe in Southern Mexico lacks nitrogen in the soil. In this region, a particular type of corn grows and feeds an entire community — without the help of any fertilizer. Traditionally, it is necessary to add fertilizer to the soil in order to provide the corn plant with the nitrogen it needs to grow. But in the Sierra Mixe, this isn’t the case.

Although there has been speculation for decades that this corn might be able to naturally fix its own nitrogen from the atmosphere, researchers at UC Davis have finally been able to gather conclusive evidence supporting this rare and bizarre phenomenon.

The Sierra Mixe corn species has thick, red and tubular aerial roots bathed in mucus, which contain microbes that are most likely able to fix nitrogen for the plant. Most other regions where corn is grown do not contain these nitrogen-fixing microbes. Modern scientific methods have been key in proving information on what has been speculated for the past 30 or 40 years.

“It primarily involves the use of stable isotopes,” said Alan Bennett, a Ph.D. professor of plant sciences at UC Davis. “Nitrogen exists as either N14, which is the most abundant form, or N15, because the ratios of N14 and N15 are different in the air than in the soil. You can look at the ratios of N14 to N15 in the plant and determine whether that nitrogen came from the air or from the soil.”

Since the nitrogen found in the corn is found in ratios similar to that of the air, this provides evidence for the fact that this corn is getting its essential nitrogen from the atmosphere — something many people in the Southern Mexican region have hypothesized for decades. Metagenome sequencing is the other key component of testing the nitrogen fixation in the plant.

“We had known about this corn for a long time but we really didn’t have a good way to study it,” Bennett said. “It wasn’t until metagenome sequencing became a possibility that we started working on the corn. It was really a technical breakthrough in sequencing that made everything else possible.”

The UC Davis team is still in the beginning processes of testing whether this corn has the capabilities to be commercialized.

“Through conventional plant breeding (not GMOs) we could transfer this trait into conventional corn in, say, Iowa,” Bennett said. “This could translate to farmers applying less fertilizer.”

Fertilizer is known to cause numerous environmental problems, so this could be a major step forward in protecting the environment.

“Nitrogen (in fertilizer) has detrimental water quality effects and detrimental effects in terms of it creating hypoxic zones,” said Michael Kantar, a professor in tropical plants and soil sciences at the University of Hawaii at Mānoa.

Hypoxia results in eutrophication, which is caused by algae blooms fueled by an influx of nitrogen from fertilizer in runoff water from farms.

“Commercialization is a really long process,” Kantar said. “The questions we have to ask include what this crop yields in comparison to large scale productions and even whether or not it tastes good.”

The potential of commercialization is accompanied by ethical questions as well. For example, is it fair to study and then commercialize a crop that a small community has been cultivating for centuries? In order to solve some of these questions, the team at UC Davis has coordinated with the Mexican government.

“There’s a treaty on biodiversity and part of that is the Nagoya Protocol, saying that governments own their genetic resources and in order to get access to those resources, we need to have an access and benefit sharing agreement,” Bennett said. “So we developed an agreement that said UC Davis can study the corn and even commercialize it, but if we do commercialize it then any economic benefits that come back to the university will be shared with the community.”

Commercialization through crossbreeding of the Sierra Mixe corn is also expected to help regions suffering from a lack of nitrogen in the soil and inability to access fertilizer, potentially helping with food security. Despite the possible benefits, there are complexities associated with commercialization.

“There tends to be a lot of scientists that hope that the improvement of a single crop will change the circumstances for thousands or millions,” said Kristin Mercer, a professor in the department of horticulture and crop science at Ohio State University. “However, the situation is usually more complicated than that and involve histories of colonialism and dysfunctional development. That said, regions with low access to agricultural inputs or suffering from nutrient pollution could certainly benefit from maize that fixes nitrogen.”

Ultimately, the corn is still in the beginning stages of being tested for commercialization, but the discovery of a corn being able to fix its own nitrogen is unique nonetheless.