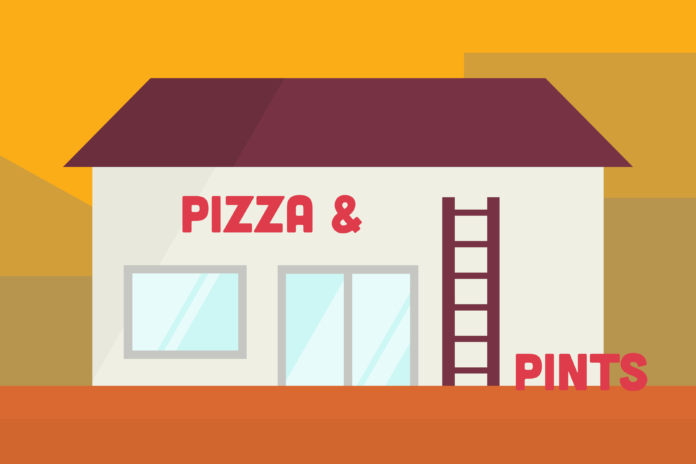 The new restaurant, Pizza & Pints, will have a casual setting with counter service, in contrast to Fattahi’s other restaurant, Village Pizza & Grill.

“The other restaurant is a full-service,” Fattahi said. “This is counter service. We [Village Pizza & Grill] have a very extensive menu, eclectic menu. Pizza & Pints is going to have a very limited menu — eight pizzas, four pastas and four salads […] Also, what’s different is the oven is a rotating brick oven we imported from Italy and it will burn wood.”

“We will be serving coffees and breakfast items,” Fattahi said. “We do have a full bakery by the train station, and we’re planning on supplying this new restaurant with a lot of pastry options.”

Another difference between the two restaurants will be the beer selection. As the name implies, one of Pizza & Pints’ selling points will be its large selection of craft beers.

“We have craft beers at the Village Pizza & Grill, too, but there’s only 12 taps, so there’s limited rotation options,” Fattahi said. “We’ll have 30 taps at the new place, Pizza & Pints, and we can feature more local craft beers.”

Location played a big factor in Fattahi’s decision to open a new pizza restaurant. Village Pizza & Grill is located on G St. near the perimeter of downtown, while the new restaurant will be in the heart of downtown Davis. Fattahi said the busier B St. location was the main draw and would help get the word out about the new restaurant.

“We wanted to be in a better location,” Fattahi said. “There’s not a lot of foot traffic where we are here [at the Village Pizza & Grill]. I think we have a pretty good name in town, and the fact that it’s at a good location — the main corridor from downtown to the campus — will get a lot of bicycle and foot traffic. I think it’ll probably just advertise itself.”

Pizza & Pints will be another addition to Davis’ many pizza options, including Woodstock’s, Blaze Fast-Fire’d Pizza, Uncle Vito’s Slice of NY and Steve’s Pizza, as well as the usual big chains like Domino’s and Little Caesars. While this many options might seem to make for stiff competition, Steve Wilkinson, the founder of Steve’s Pizza, did not express concern over the arrival of Pizza & Pints. Wilkinson, who opened Steve’s Pizza in 1978, noted the expansion of Davis’ dining scene and thinks it will benefit all downtown businesses.

“The downtown has changed over the years,” Wilkinson said. “There’s a lot more restaurants and bars in the downtown area. I think it just brings more people downtown, so it helps us all.”

About one in eight Americans consume pizza on any given day, according to a 2014 report from the United States Department of Agriculture. Young males consumed even more pizza, with more than one in four males ages 6-19 years eating pizza on any given day. College students also supply an ample customer base for Davis restaurants.

Independent pizza restaurants feed a large share of this market, and customers often choose them over chains. The Chicago-based food industry consulting firm Pentallect, in collaboration with Critical Mix, found that consumers rated independent restaurants as superior to chains in 12 of the 15 studied key attributes across both operational and emotional metrics, such as being community-oriented, offering personalized service and sharing values with the customers.

Pizza & Pints, an independent pizza restaurant, is expected to open near the end of March.