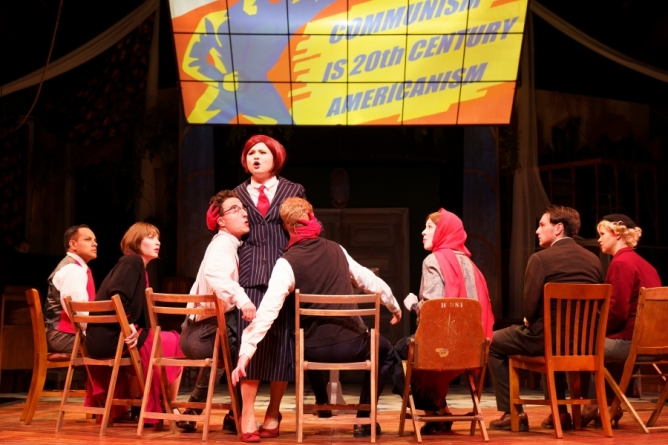 Review: “Flora and the Red Menace”

The UC Davis Department of Theater and Dance opened “Flora and the Red Menace” as its Winter Quarter Granada Production on Feb. 28. The musical, written by George Abbott and Robert Russell, takes place in 1935 in New York City. The story follows a group of artists trying to make a name for themselves while struggling with the effects of the Great Depression.

“Flora” debuted in 1965 and was Liza Minnelli’s first starring role on Broadway. Although the play was not commercially successful, Minnelli won a Tony Award for Best Actress in a Musical for her role. It was also the first collaboration between composer John Kander and lyricist Fred Ebb, who would go on to work together on award-winning titles such as “Cabaret” and “Chicago.”

The Davis production was directed by Mindy Cooper and Judy Blazer, two women with decades of Broadway and theater experience. Cooper, now a UC Davis professor of theater and dance, has worked as a performer, choreographer and director in several Broadway and Off-Broadway productions. Blazer is the UC Davis Winter 2019 Granada Artist-In-Residence and has performed in several Broadway productions such as “Titanic the Musical” and “A Gentleman’s Guide to Love and Murder.”

Cooper and Blazer took their extensive knowledge of the world of professional theater and channeled it into teaching the student actors for the production. The expertise of the directors translated on the stage and created a top-notch production.

Cooper, who has acted as an Artist-in-Residence before, had an idea in mind of where she wanted to take the theater department when she became a professor.

“I loved the work at the department,” Cooper said. “But one of the things that I wanted to bring here was musicals.”

That is one of the many reasons the directional team chose “Flora and the Red Menace” for the students to perform. The musical score is fun, poignant and challenges the actors’ vocal ranges.

Cooper also chose “Flora” because of the relatable content of the plot and script.

“I chose it because the characters in this piece are young, passionate artists trying to find their way in the world, and I knew that the storyline would resonate very heavily with my actors,” Cooper said.

The cast of students, who only began rehearsals at the beginning of the quarter, fully immersed themselves in the characters and the era of the musical. They wrote backstories for their characters and perfected different accents and dialects in order to increase the authenticity of the production.

Third-year theater and dance major Talia Friedenberg truly shined as Flora, the headstrong and passionate female-lead. Friedenberg carries the show effortlessly on vocals alone, which when paired with her impeccable comedic timing made her the ideal leading actor.

The rest of the supporting cast took on the challenge of playing multiple characters throughout the course of the show. In keeping with the history of the musical, there was only a cast of nine people to play the 25 different characters of the show.

“I teach my actors how to change DNA on a dime,” Cooper said. “If you put a different hat on, you’re a completely different human being.”

This challenging feat was executed to perfection by the hardworking and talented cast. Fourth-year theater and dance and wildlife conservation biology double-major Shannon McCoy was particularly strong as both Elsa, a fashion designer and friend of Flora, as well as the haughty secretary for Flora’s boss, Mr. Stanley. McCoy was believable as two completely different characters and made each of them feel unique.

Third-year theater and dance and English double major Charlie Lavaroni functioned as a narrator and comedic relief in the role of Willy. Lavaroni gave an understated, but extremely nuanced performance, and his likability was evident in each character’s hat he adorned. He was able to move the story along without distracting from the other characters, a true testament to Lavaroni’s thoughtful performance.

Second-year human development and theatre and dance double major Sophie Brubaker’s portrayal of the vehement Communist Party advocate Charlotte is what really stole the show. Sporting a bright red wig and a pinstripe suit, Brubaker became the perfect antagonistic caricature. She was an instant audience favorite with her musical number “The Flame” and continued eliciting genuine laughs and astounding people with her vocals throughout the night.

Fourth-year international relations major Hannah Ross attended the show as an assignment for class and was amazed by the production of it all.

“The set is amazing, the performers are amazing,” Ross said. “I’m pleasantly surprised.”

The show is held at the Wyatt Pavilion Theater, an intimate and small venue. The cast played the size to their advantage, often weaving in and out of the rows during musical numbers or having the characters pass out plot-related flyers.

In a post-show question and answer portion, Challis spoke to the intimacy of the theater and the effect it had on the show.

“Being able to bridge the gap between audience and cast was a really cool experience,” Challis said.

The show was a delight from start to finish. The hard work of the production team was evident in every detail of the show.

“I’m most excited for the students to relish in what they have created,” Cooper said before the performance. “It’s a very moving piece, it’s a very touching piece […] and I’m excited for them to get an audience and make them laugh, make them cry, make them feel. That’s what theater does.”

“Flora the Red Menace” will hold its second weekend of performances March 7, 8 and 9 from 7 to 9 p.m., as well as a matinee performance on March 9 from 2 to 4:30 p.m. Tickets cost twelve dollars for students and can be purchased online or at the door.