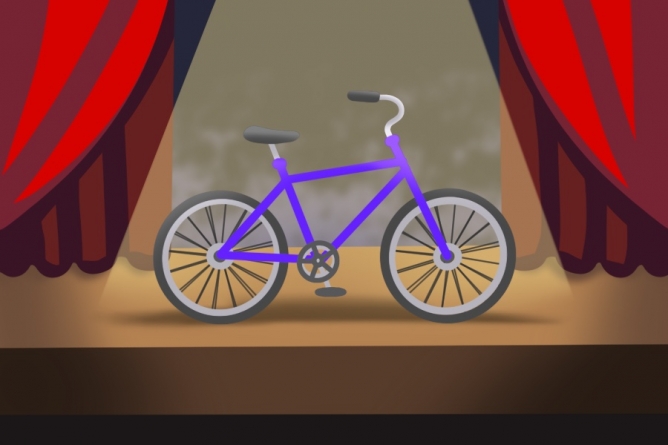 When Bike City Theatre Company Artistic Director J.R. Yancher sought sponsorship for “Light the Way: A Bike Safety Musical,” he said that people first asked him, “Are you doing it for the college students?” Upon learning that the show was for children, they added that “[the college students] need it more!”

The show toured all eight Davis Joint Unified School District elementary schools between April 18 and April 26 in order to encourage children to bike safely to school. It will also be offered to schools in surrounding areas next fall, and there will be performances open to the public this summer.

Its story takes place in 1894 and follows Annie Londonderry’s 15-month bicycle trip around the world. With songs like “El Casco,” which instructs, “Don’t be a clown — protect your crown!,” the show goes over bike safety essentials such as wearing a helmet, understanding intersections, signalling and using bike lights.

Casted with five UC Davis students, the 40-minute long original work was sponsored by Nugget Markets and Davis Kids Klub and was also made possible through Safe Routes to School funding. As the Caltrans website explains, Safe Routes to School is an international movement that aims to combat “preventable childhood diseases, worsening air quality and congestion around schools, and missed opportunities for children to grow into self reliant, independent adults” by encouraging and enabling more children to walk and bike to school.

In Davis, Loretta Moore and Rachel Hartsough — who are the Safe Routes to School coordinator and program manager, respectively — chose to commission Bike City Theatre Company for the bike safety musical for Safe Routes to School after they saw the company’s production of “Gutenberg! The Musical.” Working alongside Moore and Hartsough has been Jennifer Donofrio, the city’s bike and pedestrian coordinator.

The city has previously sponsored other bike safety education programs — “This is How We Roll,” from Los Angeles’ Shows That Teach, and “Rock the Block,” from Alameda County’s Bay Area Children’s Theatre — but Moore said that the local aspect of Bike City Theatre Company caught her interest.

The fact that the company is local also allowed the city to be more involved in which specific messages were communicated to the students. Writers and actors from Bike City Theatre Company took the city’s bike education class, and Moore, Hartsough and Donofrio gave feedback on the script as it was developed.

When Moore attended the performances, she said she enjoyed seeing the students’ receptions of the musical’s messages.

“[Students have] been really engaged with this program,” Moore said. “It’s very good.”

Yancher also saw this engagement and said he received positive comments from teachers.

“One of the sixth grade teachers gave us an A+,” Yancher said. “All the students were really happy, and they were walking out singing the songs — which is what we wanted, because all the safety tips [were] in the songs to try to get it in their head. So if it’s there, we succeeded.”

Yancher said that working with UC Davis students was another beneficial aspect of the production.

“I was happy to have them,” Yancher said. “They were awesome and positive and super into the project. We use UCD people all the time.”

Actor Jordan Brownlee, who played multiple parts in the musical and is a third-year cinema and digital media major at UC Davis, echoed these sentiments.

“I really enjoy working with everybody here,” Brownlee said. “We all come to rehearsals with a positive attitude, we all want to get the work done and we all want to put on a really great show.”

Brownlee said that though it was difficult to memorize the script and practice different dialects, the determination of those involved made the production eventually seem seamless.

Both the theater company and the city have ideas for what’s next. Yancher hopes that with more community support, the company will be able to send a new educational show to the schools on a yearly basis, with each show covering different subject matter instead of only bicycle safety.

For Moore, the goal of the bike safety musical is that it will travel beyond Davis.

“What really is important to the city of Davis is when we spend money on active transportation — these grants — we are developing these things not just for our city, but to be shared throughout the United States,” Moore said. “The goal is to develop these things with our Davis expertise on biking and share those with other regions.”

One additional vision of Yanchers and Bike City Theatre Company is to also bring a bike safety production to UC Davis.

“Lots of freshmen come in, and a lot of them have never been in a town like this where it’s so bike heavy,” Yancher said. “And they’re zipping through intersections without stopping and stuff like that, […] and so I’m hoping that in the next year or so, we can do something for the UCD students.”

Until then, the public performances of “Light the Way: A Bike Safety Musical” will be shown from June 1 to 2 at a Davis elementary school. Once it is determined, the exact school will be announced via posters around Davis.

“We intended it to be enjoyable for adults and children,” Yancher said.