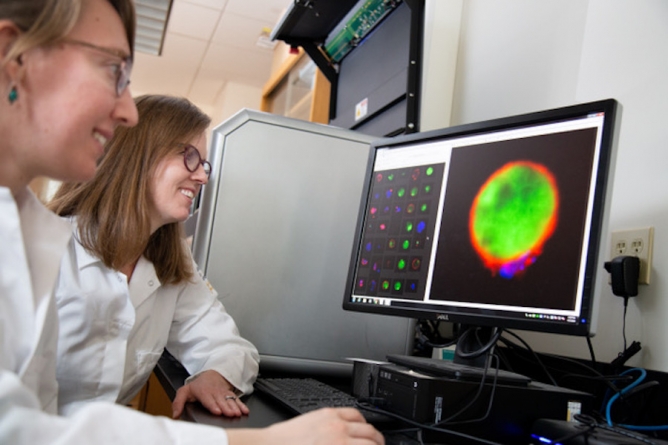 The image of a wolf dressed in sheep’s wool is commonly used as an analogy for camouflaging, and a certain type of parasitic amoeba called Entamoeba histolytica certainly fits this analogy. Discovered by UC Davis researchers, these amoebae “nibble” on human cells and display human proteins on their surfaces in order to evade the human body’s immune response and sneak into the bloodstream.

Katherine Ralston, the assistant professor in the department of microbiology and molecular genetics, was initially interested in how microbes interact with hosts during her undergraduate career at UC Davis. She continued to study parasites in her graduate and postdoctoral training, and now runsa lab where she studies Entamoeba histolytica, which infects the intestinal tract in humans.

“Parasites are important causes of worldwide disease – for example malaria is caused by a parasite, and E. histolytica causes 50 million diarrheal infections annually – but they are generally underappreciated and understudied,” Ralston said. “Parasites are single-celled organisms, but they are not bacteria and rather they are the same types of cells as the cells that make up our bodies – they are eukaryotes. This makes parasites more complicated than bacteria, and they are really interesting and important to human health.”

Ralston’s laboratory aims to understand how this species of amoeba causes diarrheal diseases in humans. In rare occasions specific to this amoeba, the Entamoeba histolytica can also cause ulcers and liver abscesses by traveling through the intestinal lining, the process of which researchers are currently looking into.

“We’re not only learning about entamoeba itself, but we’re also further understanding the fact that this nibbling process, trogocytosis […] might be a overarching theme in cell biology in eukaryotic cells,” said Rene Suleiman, a third year microbiology student. “So we know that immune cells do this, and now we know entamoeba and other species of amoeba do this process as well, so I mean I would want people to be excited about it and maybe come up with more questions of how we could study it.”

According to Suleiman, there are still many unanswered questions about the entamoeba that researchers have yet to discover. She is currently working on examining attachment proteins and how the amoeba differentiates between different human cells. Hannah Miller, a Ph.D. student also working in Ralston’s lab, discovered how human proteins are displayed and  is looking to further their research by creating mutant amoebae that are unable to undergo trogocytosis and comparing them to wild type (non-mutant) cells.

“I would like people to appreciate that parasites are an important cause of infection, not just bacteria and viruses,” Ralston said. “Parasites like Entamoeba histolytica can do really complicated and clever things.”