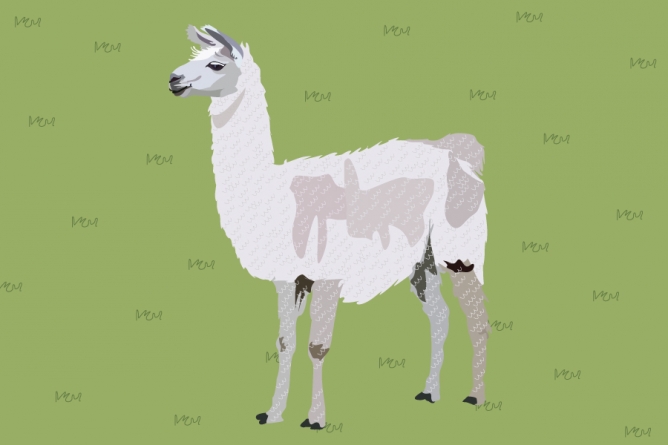 Over the course of one and a half hours, almost 300 people stopped by the East Quad to interact with the llamas, according to the event coordinator, Milly Judd.

“It had a very positive impact on students and their mental health. Everyone was so excited to be petting and taking pictures with the llamas, and I heard people talking about it for the next week at least,” Judd, a fourth-year animal science major, said. “It really put a smile on everyone’s face.”

Students were even able to hold carrots between their teeth and even kiss the llamas in order for them to eat.

The llamas came from Llamas of Circle Home, a ranch in Sonora, Calif. that has worked with the animals for 35 years. According to their website, Llamas of Circle Home brings their furry friends to schools, universities and more to share “this medicine and energy with others.”

The llamas arrived in a large van along with the owner and one professional handler. One team member from the Mental Health Initiative was also helping out to hold each easy-going llama while students interacted with them.

While Milly Judd arranged a lot of the event, the mastermind behind “No Prob Llamas” was Elena Torres-Small. The team put a lot of hard work into holding the event by getting approval from about six different departments on campus to ensure the safety of the llamas, students, handlers and equipment. Torres-Small also came up with a tabling event idea called “Donut Stress!” to attract students and get them excited for the events being held throughout the month.

Based on the success of “No Prob Llamas,” the event will most likely happen again for Mental Health Awareness Month for years to come.

“The owners loved how the students reacted to the llamas, the students loved the llamas and MHI loved seeing all our hard work make so many people so happy,” Judd said.

Mental Health Awareness Month still has events planned for the duration of the month. They can be found tabling at the MU patio every day and have two themed days per week. The events and online program can be found on the UCD Mental Health Facebook page and Instagram (@ucdmentalhealthinitiative).