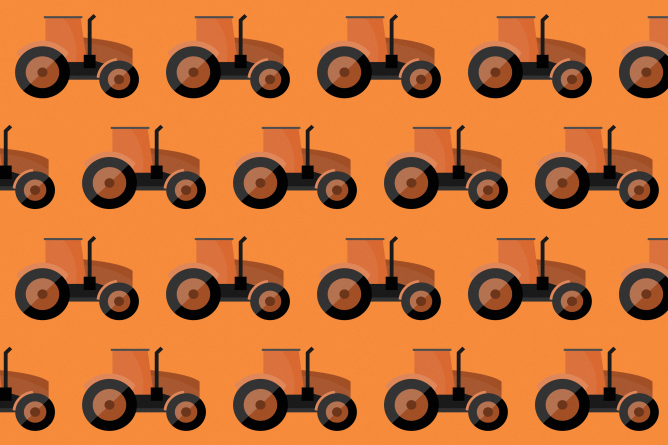 During my spring break, I set aside time to visit my grandparents farm. We did what we normally did: we walked out to the “sump,” an ugly, moldy body of water just a short walk through the almond orchards. It serves the purpose of irrigation on the family farm.

We set out, walking under the tall brittle branches of decades old almond trees. The same trees that my mother and aunt spent summers raking rows of almonds and pulling weeds. When my mom went to sleep at night, she’d see undulating rows of cotton and waving arms of almond trees, and it was the same in the mornings and throughout the day.

While we walked, the two farm dogs — BD, for “Black Dog”, and Sam — followed along, sniffing and eating grass and leftover fallen almonds. They knew just how to crack them open to get to the nut inside.

In normal salt of the earth parlance, my grandpa Lloyd Bowman would say, “Yeaaah”  — pause — “been no rain lately,” and in the distance my grandmother would sing hymns with a sweet gentle alto range. My grandpa could tell you about crop yields, weather, farming techniques and who owned what land, going back to 1945. He’s 95 years old, and yet nothing seems to escape him.

Finally when we arrived at the sump, the dogs eagerly splashed around in the water, and we talked about old times of when my brother, my cousin and I would stay weekends here, throwing dirt clods at farm equipment and taking walks through the long endless rows of blooming, fragrant almond trees.

Eventually it was time to head back. Walking through the orchard didn’t have the same feeling it used to, because it wasn’t ours anymore. A large scale grape grower had bought all of it up from us. It wasn’t a great loss. It was just time.

My grandpa had started farming when he married my Grandma after WWII. Farming had been something he had always wanted to do.

“I grew up on a farm,” my grandpa said in a phone interview. “I started driving tractors when I was about seven or eight years old. I didn’t go to college  — I didn’t want to go to college. I wanted to farm, it was in my blood.”

They had 150 acres of land and primarily were farming alfalfa and cotton  —- the land was rented from his father, who had been farming in the Central Valley for a long time.

“I was working with my dad and he bought the property. So, it wasn’t too difficult. We started out with small acreage, and we didn’t have a lot of money, but the price of property, land — farms were pretty cheap then.”

For the first year of farming, they had to pick the cotton crop by hand. It was labor intensive and taxing, but soon a mechanized cotton picker became more widely used, and by the second year the farm had already become more mechanized.

And mechanization, he reflected to me, was one of the most profound developments in the life of a farmer. The ability to produce more with less back breaking labor was key to making farming a more efficient occupation.

As for farmers today, he thought that it might be more difficult if one were to try to begin to get started in the business. “The cost of operation is so much greater than it was 75 years ago. The cost of development, drilling wells, getting water. To get started nowadays would be really hard. They developed a lot of new equipment and it’s costly.”

I talked to a local Davis farmer, Sarah Davis, to get some insight in what it is like to be operating a farm right now.

“We have a really unique situation. My husband grows all this stuff, and he loves to do the actual work. Most farms, once they get to a certain size, they make money by growing and by paying somebody else to do all the work. He loves to do it.”

As for the viability of farming for an average family, Davis had doubts.

UC Davis researcher and lecturer Shermain Hardesty gave insights on the challenges small farmers face, and the strategies they may employ to overcome those challenges. Much of her research and work focuses on helping small to mid level producers differentiate themselves and establish stronger supply chains and marketing techniques.

“It’s a very competitive environment now. It’s not just domestic producers, you are also competing with imported producers as well.”

Further, small farmers are simply unable to compete with the competitive pricing of imported goods.

“People are looking for the cheapest priced food because that’s all they can afford. Grocery stores have been consolidated to the max. They squeeze every penny out of a farmer when they’re making contracts,” Hardesty said. “The type of producer that can do it obviously is the bigger one. They often sell directly to the grocery chain.”

The agriculture economy in California, in particular, has become structured in such a way as to be less local.

“California agriculture really developed as a supplier for the rest of the country and even much of the world. It’s always been about exporting to other places, not being local,” Hardesty said.

But it is exactly the fact that large producers are less focused on local sales that helps small farmers find their niche.

“The main difference I see happening is that these small farmers, the only way they can really be viable is if they are going to be selling locally […] They need to specialize, to be able to have an identity,” Hardesty said.

“It starts with farmer’s markets. But then they usually have to find other ways of expanding their marketing efforts.” This is because farmer’s markets only have so much space for growers. This space is filled because of the great advantages of farmers markets being an opportunity for community engagement and connection.

While interviewing Sarah Davis at a rainy Wednesday Davis Farmers Market, there were multiple times when we had to pause the interview for Sarah to have conversations with her customers.

“We get to know people and their kids growing up. You have a 10 second conversation with hundreds of people, but some people come back every week and you get to know them.”

This sort of community engagement is an important part of what Shermain Hardesty is attempting to do in her own work.

“Working with a bunch of people, what we are trying to do is create value based supply chains. From the farmer, to the seller, to the consumer, you have those values passed on so that people really understand and appreciate and are willing to pay for those values.”

“Over the longer term, we have to realize that in order to take care of our environment and our cultural values, we are going to have to pay a lot more for food than we currently do.”

Paying more for the food at farmers markets can mean more than just paying for environmental and cultural values. It can also mean giving back to the community in an economic way. Shermain Hardesty claims that small farming can have important local economic benefits.

“Smaller farms are more labor intensive, but the other side of that is that they contribute a larger economic benefit to the community. They generate more economic activity because their labor is local,” Hardesty said.

Davis pointed out that connecting the consumer to the food they buy will make them more knowledgeable about farming. Exclusively shopping at big stores, with out of season food imported from other countries, can sometimes warp a consumer’s expectations about farming.

“We’re used to cheap food. We’re used to having everything all the time. People say, ‘Why aren’t there tomatoes here’, and well, it’s May. But people don’t know, they’re used to seeing what they see in stores,” Davis said.

But ideally, engagement with local farmers will help consumers feel more connected to the food they eat.

“People come to Farmer’s Markets because I think they’re really eager to have a connection,” Davis said. “If you come here every week, you learn what’s in season and what to expect. That’s key to the future of small farmers, having customers like that. Who are knowledgeable and who care. Who think it’s worth something to maybe pay the same or a little more for things that are really fresh and local, and taste really good.”

Hardesty hopes that this kind of education about farming will occur in the future.

“My dream is that we still have our regular grocery stores, but we would have broader availability of locally grown produce that was advertised for what it is, and why it costs more,” Hardesty said.

Hardesty and Davis both agree: Through community, knowledge and values around farming can be fostered and increased.

My grandparents farming days are long gone. The farm has been sold, as have their friends plots of land around them. When one friend across the street sold, and their almond trees were cut down, my grandma cried. After decades, those familiar trees were gone. It seems like everytime when we walk to my car as I’m about to leave, she shrugs and says “Isn’t that so sad?”

But even as small farmers move on and sell their land, people like Sarah Davis and Shermaine Hardesty work hard to ensure that the values of local farming remain.