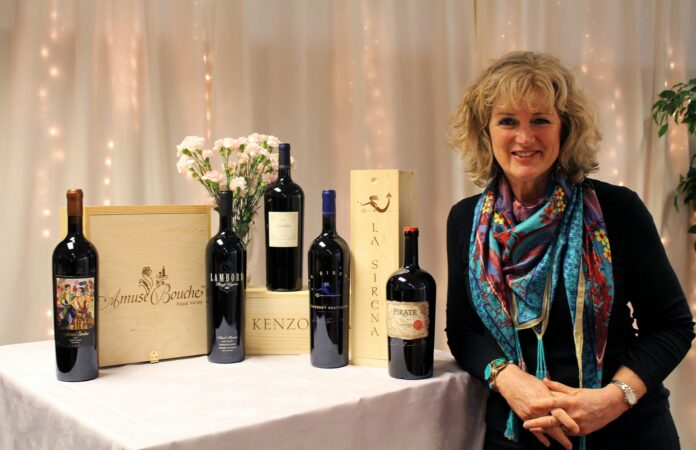 Heidi Peterson Barrett, queen of the American winemaking industry, an icon and oenological legend, was born in Berkeley, CA, to a family of vintners. Wine flowed through Barrett’s veins, and she took the first steps toward her calling by attending the fermentation science undergraduate program at UC Davis, at which time she was one of four women in a 30-person class.

After graduating from this program, Barrett went on to become the winemaker at Buehler Vineyards at the age of 25. This was 1983, a time when there were not many women dominating the wine industry, let alone leading it as head winemaker.

After Buehler, Barrett continued influencing the wine industry — she was hired at various iconic houses such as Dalla Valle Vineyards, Screaming Eagle and several others and also worked as a freelance winemaker.

Barrett is currently winemaker for her own brand, La Sirena, and has produced wine under the labels Amuse Bouche, Paradigm Winery, Lamborn Family Vineyards, Fantesca and others. To top it all off, Robert Parker has awarded five of Barrett’s wines a perfect score of 100 points on his wine critic scale and has fittingly dubbed her “the first lady of wine.”

In the spring of 2018, the Viticulture and Enology department hosted Barrett as a guest lecturer for its speaker series VEN 190X. The event was an opportunity to listen first-hand to Barrett speak about the wines she had crafted and also taste these wines as she gave notes on their flavor profiles and histories.

A one-hour lecture was simply not enough time to even scratch the surface of Barrett’s impact on the thousand-year old industry of wine — Barrett is full of life and her passion radiates through her love of wine, so I sat down with her in an attempt to highlight just that.

Gillian Allen: First off, how are you?

Heidi Peterson Barrett: Really busy and very jet lagged. I was on this trip to the Maldives for the last two weeks. Some of the best [diving] in the world is over in that part of the ocean: Papua New Guinea, Indonesia, Great Barrier Reef, Palau, Fiji. I took diving at UC Davis as a two unit class, so the open water training dives were at salt point and a second weekend was down in Monterey, so that’s where I learned to dive.

Allen: When you spoke at the 190X seminar, I remember you going into the details of the name “La Sirena” and the idea behind the labels. How does it feel that your label represents you as a winemaker? Does it channel your passion for scuba diving at all?

Barrett: Yeah, absolutely. That was a way for me to combine my two passions of making wine and my love of the ocean, and also the magic element of both. There’s definitely something special about [making wine] that we all recognize, it’s different than making any other product, and choosing a mermaid as my logo was a way to represent that as well. There’s just so much more to it that brings in the magic element of … working with nature, and weather, and something that grows out of the earth and elevating that in some way, which is really fun.

Allen: How does it feel knowing you have created something that brings enjoyment to so many people?

Barrett: It’s really satisfying. It’s a lot of work, but then it goes to improve people’s lives with either helping them celebrate a special occasion or just making them happy. They’re drinking something delicious. It’s very satisfying when you can help bring joy to people through making wine. Also, I like that it’s sort of a time capsule — a moment in time or [something that] happened in any given vintage, and that can live on for a while. It lasts at least a couple of decades if it’s done well, for red wine certainly sometimes more. So it’s a piece of your work that can actually have some longer impact that sticks around for a while and can change and keep improving.

Allen: When your success first started taking off, did you ever see yourself as an inspiration to future female winemakers? And if so, did this affect the way you made decisions?

Barett: No! I never saw that coming, I never even thought about that. I was just trying to make great wine, do the best I can, keep learning [and] see how far I can take this. I never thought about that side of it, that that would be sort of a side benefit, and I love that that’s happened — that it does inspire people. Some other young women have told me, “We love what you do and it really helps us think that if you can do it, we can do it too.” It’s really nice to hear these great stories from women that are fired up about it and inspired. I love that.

Allen: What is one challenge you overcame and what did you learn from it?

Barrett: I don’t know if I can pick just one, there’s definitely always challenges and you just kind of keep digging in to push forward. Just figure out a way to make things work or just improve whatever the situation is. It’s definitely a changeable business — just the nature of it, you have to be ready for anything. I think I’m kind of well-suited to it because I don’t give up easily, so I think those things really help create a good career. Just be willing to keep moving forward and keep learning. No matter what age we are, we just keep learning every year. It makes it a lot of fun, too.

Allen: What advice do you have for first-generation, aspiring female winemakers who didn’t have the same exposure to the industry growing up as you did?

Barrett: Make sure you love it. Go out and test the water — it may be different than you think, it’s not entirely this whole romantic industry. It’s actually a lot of hard work, and I think that surprises people sometimes of how much physical work there is unless you’re up for all of that. I always encourage people, before they get hook, line and sinkered, to go work and make sure you love it before you full-on commit to this industry, because it may be a little different than it looks like on first glance.

Allen: What are some things you haven’t seen in the wine industry that you would like to see more of?

Barrett: Accessibility to people with wine and [making them] feel more comfortable with it. A lot of people are really intimidated about not knowing enough when they go to a restaurant to feel confident when they order. Just get enough knowledge that you feel as comfortable when you order wine as you do [ordering] food and, if not, rely on the person from the restaurant who bought those wines. They know what they taste like and they can make a recommendation for you. Just make it really user-friendly — more a part of everyday life, not so intimidating. It doesn’t only have to be a special occasion kind of thing that’s always on a pedestal, it can be just an enjoyable part of life.

Gillian Allen is a recent UC Davis graduate who previously wrote and edited for The California Aggie for several years. She received a degree in viticulture and enology and is now working in Napa Valley.

Artificial intelligence is the future, but is it a threat to education?

Studying local flora can strengthen your connection to Davis

A guide to Pakistani food

Remembering Tyre Nichols: A father, a son, an artist, a skateboarder, a friend