The difference between Halloween and Day of the Dead 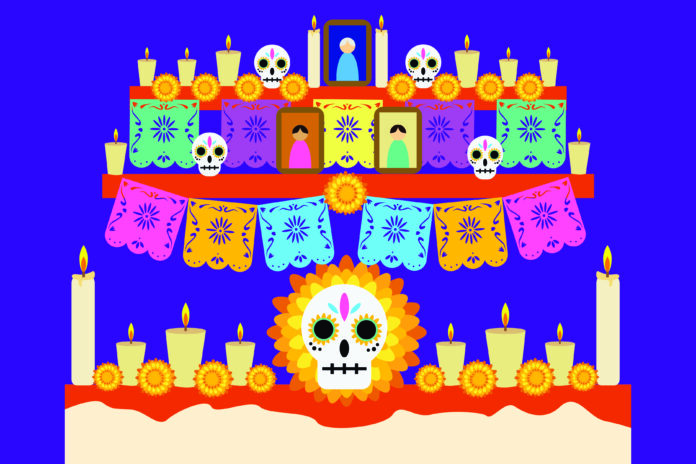 The culture behind the three-day festival

As October comes to an end and the leaves start to crunch under every step, many people immediately think of Halloween. Halloween might mean stopping by Target for decorations, going back home to take your siblings trick-or-treating or attending a costume party. But for the Latinx and Chicanx culture, the end of October carries a different significance — Día de los Muertos (Day of the Dead).

The holidays begin on Oct. 31 and end on Nov. 2. Each day is dedicated to different lives. Oct. 31 is Día de los Santos, or All Hallows Eve. On Nov. 1, El Día de los Inocentes (the Day of the Innocents) is when children who have passed are remembered. The last day of the Day of the Dead celebration is All Souls Day, when anyone and everyone is remembered.

“Halloween is more about being scared,” said Joyce Tang, a third-year environmental and science management major. “People dress up, they go around as something else and come back home to eat candy. By the next day, it’s over. But with Day of the Dead, it doesn’t end. It’s about the people that you love and how they’re still here, even when they’ve passed.”

Those celebrating Día de los Muertos prepare by gathering photos of loved ones who have passed and making an altar (or ofrenda) in their memory.

“Dia de los Muertos, or Day of the Dead, is more family-oriented.” said Alondra Avitia, a second-year Spanish and human development double major and member of the Sigma Pi Alpha sorority, a Chicana/Latina based sorority. “It gathers everybody together to remember those who are no longer here. It’s not that Dia de los Muertos can’t be fun, but it’s more of a serious matter because you are honoring your loved ones.”

The ofrenda forms a connection to loved ones. By placing all of their favorite foods and items on the altar, it becomes an offering. Marigolds are placed around the pictures and the smell of pan de muerto — a traditional Mexican bread that is made for the holiday — fills the air.

The ofrendas are meant to call the souls of the past loved ones. The marigolds and their petals are there to guide their souls home. During these days it is believed that past loved ones come back to visit as we celebrate the lives they once lived.

“I feel like that day you really get to know your family, because everyone gets together and then they talk about people who you might have not even met and you’re like, ‘Oh, you know, I would have liked to meet them,’” Avitia said.

Families in Mexico and the United States celebrate the holiday differently, as the tradition shifts in the U.S.

“I feel like here in the U.S., it can be taken more for the aesthetics, because you have the face painting and all that,” said Diana Santoyo, a fourth-year human development and psychology double major and Sigma Pi Alpha. “And in Mexico [it] is more meaningful only because it’s more family-oriented.”

While the Day of the Dead has long been a dormant holiday in the U.S., movies are shining a light on the three-day celebration. Popular children’s movies like Disney’s “Coco” and 20th Century Fox’s “The Book of Life” portray tradition with a magical twist. But what’s loved about these movies is how well they show the culture.

“You feel that presence when you’re celebrating,” Avitia said in reference to the movies. “I feel like, maybe [my passed family members] are around here. Maybe they do come from someplace and it does affect whether you remember them or not.”

As the movies gain popularity, they also piqued the audience’s interest in the holiday. The famous depiction of a skeleton wearing a flowered-filled hat is known as La Catrina, the Aztec goddess of death. But where she mostly shows up in the present-day is in makeup. Makeup tutorials for beautiful skulls (or calaveras), similar to how she is drawn can be found in many YouTube and Pinterest tutorials. While these new trends have surfaced, there still remains an entire culture behind them.

“It depends on their intentions,” Santoyo said. “And [if] they’re just trying to do the same purpose of promoting the culture, then that’s fine. But if they’re just doing it for the aesthetics and because they think [the makeup] is nice I feel like that probably isn’t okay.”

The Latina/Chicana culture sorority Sigma Pi Alpha will hold a community event in order to share this holiday with everyone in Davis. Their event is on Nov. 13 in the Activities and Recreation Center from 6 p.m. to 9 p.m. Different on-campus organizations will decorate their ofrendas according to different themes.

The sorority is not the only group in Davis that will contribute to the event. The Center for Chicanx and Latinx Academic Student Success is building an ofrenda for every student at UC Davis to place pictures of their lost loved ones.

“It’s really important to do a Dia de Los Muertos event in places like this because you’re educating people, you’re promoting cultural awareness,” Santoyo said. “So this event just has organizations participate in making altares and we have mariachi and just usual traditions. It’s just a way to gather everybody even though they’re not [direct] family; it’s the UC Davis family coming out to this event.”

While Davis holds small festivals for the community, Sacramento will be lit up on the Day of the Dead. In Sacramento, there will be different festivals ranging from what can be considered one big party or more solemn spaces to remember those who are no longer with us.

“I think that if I ever wanted to celebrate the Day of the Dead and go to a festival, or anything along those lines, I would need to go and learn the background of it,” Tang said. “You can’t just go to a festival that is embedded in culture only to realize you don’t belong because you don’t know any of it.”

The City of Davis cemetery also contributed to the three-day festival celebration. The historical cemetery held their annual event on Oct. 19 from 11 a.m. to 3 p.m. During different hours, there were different themes to their celebration including an altar viewing, danza, mariachi and traditional Mexican foods.

“Everybody deserves to be celebrated,” Solanzo said.